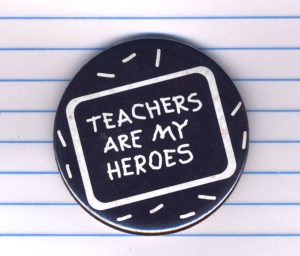 Local issues hold the key to many midterm elections, despite all the talk about how President Donald Trump is nationalizing these races and Democrats should follow his lead and do the same. It’s important to know that in many places, voters still care first about issues that affect them at home, more than the latest outrage coming from the White House.

One of those places is Wisconsin, where deep cuts to education by the incumbent Republican governor, Scott Walker, have put it at the top of many voters’ priorities.

“Education is either the top one or two issue in this election,” says Matt Brusky, Deputy Director at Citizen Action of Wisconsin. Health care is Badger State residents’ other top priority, he adds.

Brusky should know. He and and other members of this progressive grassroots group, part of the People’s Action national network, have been going door to door across Wisconsin to canvass for candidates that support the group’s Rise Up platform, an eight-year plan to move the state towards guaranteed comprehensive healthcare, environmental safeguards, criminal justice reform, and equality of educational opportunity.

When I called Brusky, he was gassing up his rental car after knocking doors in Fountain City, where locals are struggling with a school consolidation due to lack of funding from the state. “Education is usually a top issue in the state because of what Walker has done to it,” he says. “Almost all candidates are running on it.”

“It is moving to see how education has become a headline issue for the election,” says Julie Underwood, a University of Wisconsin professor. “During the public hearings on the last budget, over 30 percent of the public comments had to do with public education, and there has been a focus on education issues in candidate forums and debates.”

‘An Arms Race Over Who Can Sound the Best’

The race between Walker, who was elected in 2010 as part of the Tea Party wave that swept Wisconsin, and his opponent, long-time state schools chief Tony Evers, has become especially focused on education – “an arms race over who can sound the best,” says Robert Kraig, Citizen Action of Wisconsin’s Executive Director.

Under Walker’s leadership, the state has slashed education spending to levels below what they were in 2008 and redirected millions in education funds to private alternatives such as charter schools and voucher-funded private schools. Under his leadership, the state enacted Act 10 – a crackdown on teachers job protections’ and collective bargaining rights – which has resulted in widespread teacher shortages and inexperienced staff. In contrast.

In contrast, Evers calls for a double-digit increase in school spending, a repeal of Act 10, limitson the state’s voucher programs, and increased financial transparency of private schools that receive voucher money.

Yet astonishingly, Walker claims he is the “education candidate” in the election, pointing to recent funding increases he signed, that despite their impressive sticker price, still provide less per pupil than in 2011, in inflation-adjusted dollars.

“Walker can try to pump up his education credentials, but the problem is he is a long-standing incumbent with a clear track record,” says Kraig, “The fact he has done a lot to try to change his education profile is evidence, given his campaign’s immense polling apparatus, the he must know the issue is causing people who voted for him in the past to vote against him this time.”

“Clearly Tony Evers has the best grasp on the issues,” says Underwood. “He has been a teacher, administrator, and state superintendent.  He understands that public education is the heart of a community and critical for our democracy. Although Scott Walker claims to be an education governor, public education has been greatly damaged during his term.”

In down-ballot races, education issues diverge somewhat, depending on community characteristics. “In the suburbs,” says Brusky, “most of the talk is about losing programs and the needs for holding local referendums” to shore up budgets. “Schools are getting crushed” In rural communities, he says, with many having to consolidate or close altogether. …

(Commoner Call art, 2018. Open source and free for non-derivative use with link to www.thecommonercall.org )