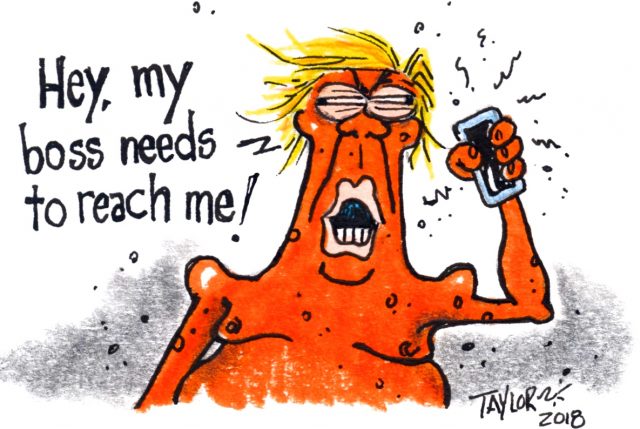 President Donald Trump was being “playful” when he celebrated a congressman’s 2017 assault of a reporter, Sen. Ben Sasse said Sunday – but he added that he did not think the rhetoric was “OK.”

We can’t count on Russpublicans to check Trump’s worst impulses on anything.

Not even his lax phone security

There are no checks on Trump, he does what he does without regard to anything beyond being seen as ‘winning’ and congressional Russpublicans and cultists could care less: ‘A Gift To Foreign Spies’: Donald Trump Roasted Over Unsecured iPhone Report.

The New York Times broke the story and Huffington Post provides a link:

“President Donald Trump was roasted on Twitter after The New York Times reported Wednesday that he continues to use an unsecured personal iPhone, despite repeated warnings it is being tapped by the Russian and Chinese security services.

“Other critics accused Trump of hypocrisy, given his attacks on 2016 presidential election rival Hillary Clinton over her use of a private email server during her time as secretary of state.”

Hypocrisy? Absolutely! As the New York Times article points out, Trump can’t be bothered with doing what is right:

“Mr. Trump is supposed to swap out his two official phones every 30 days for new ones but rarely does, bristling at the inconvenience. White House staff members are supposed to set up the new phones exactly like the old ones, but the new iPhones cannot be restored from backups of his old phones because doing so would transfer over any malware.

“New phone or old, though, the Chinese and the Russians are listening, and learning.”

Remember Trump strove to save Chinese telecommunications jobs by restraining  U.S. actions about Chinese computer and phone manufacturer Huawei after accusations of security risks with use of their equipment. Now Huawei makes this offer to ensure security for Trump:

“Taking a page from the U.S. president’s own playbook, China on Thursday denounced a U.S. newspaper report that it is listening to Donald Trump’s phone calls as “fake news,” and suggested he exchange his iPhone for a cellphone made by Chinese manufacturer Huawei.”

“Rage and hatred, violence and suffering”. There are no limits – no restraint by Trump, no limits imposed by his Russpublicans, only starry-eyed reverence by his cult.

There is no pleasure in being right by predicting it will get worse – but these last few days stand as confirmation.

VOTE. VOTE FOR OVERSIGHT.
MAYBE EVEN VOTE WHILE YOU STILL CAN.