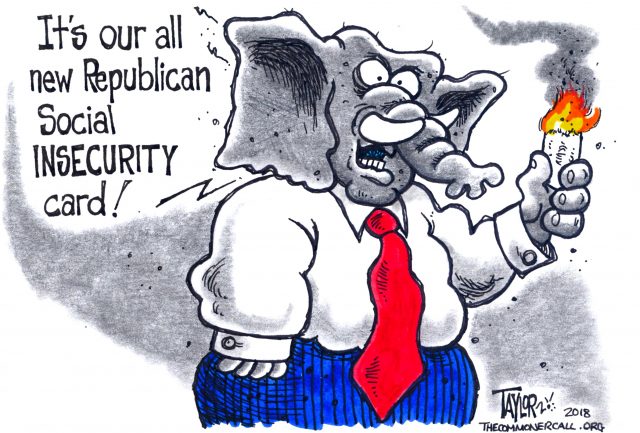 As President Donald Trump and Republican leaders make clear that they intend to enact deep cuts to Medicare, Medicaid, and Social Security after next month’s midterms in a supposed effort to rein in the soaring deficit—which has ballooned largely due to Trump’s $1.5 trillion tax law—a survey published on Friday found that nearly two-thirds of Americans would prefer repealing the Republican tax cuts over slashing the safety net.

Conducted by NPR, PBS NewsHour, and Marist, the poll found that 60 percent of Americans would rather eliminate Trump’s tax cuts than gut safety net programs to reduce the federal budget deficit. Just 21 percent of Americans said they would rather slash the safety net than repeal Trump’s tax cuts, which have overwhelmingly benefited the rich and corporations.

“Working families shouldn’t have to pay for the GOP tax bill. The rich and big corporations must pay their fair share of taxes!”

The new survey comes just over a week after Senate Majority Leader Mitch McConnell (R-Ky.) blamed the nation’s rising budget deficit on Medicare, Medicaid, and Social Security and declared that these programs must be cut to bring federal spending under control. Trump echoed McConnell just 24 hours later, promising “a lot” of spending cuts after the midterm elections.

As Common Dreams has reported, the GOP cuts have steadily declined in popularitysince Trump signed them into law last December, and most Americans say they have seen little to no benefit from the Republican law.

Meanwhile, the rich and massive corporations have seen an enormous windfall from the Republican tax cuts, which sparked an unprecedented spree of stock buybacks and record profits for Wall Street banks and major companies.

These disproportionate rewards for the rich likely explain why Republican candidates have “barely” been mentioning the tax law with just 10 days left before the Nov. 6 midterms.

“When you vote for bunk economics,” concluded Patriotic Millionaires, “don’t expect it to be an electoral boon.”

Do older Americans want bigger Social Security checks and expanded Medicare coverage – or do they want their benefits cut?

That is the fundamental question for seniors and their families with less than two weeks until the mid-term elections.  The majority party in Congress has proposed time and again to slash Social Security and Medicare benefits under the guise of ‘entitlement reform.’  Leader Mitch McConnell just attributed the swelling federal debt to retirees’ earned benefits – when the real culprit was the 2017 tax package that mainly benefited the wealthy and big corporations.  The majority party’s 2018 and 2019 budgets would have taken a $500 billion bite out of Medicare and $64 billion from Social Security.  And make no mistake – conservative tropes like raising the eligibility age, imposing a more meager inflation formula, and means testing are benefit cuts.

The choices for older voters in the November elections couldn’t be clearer.

For seniors living on fixed incomes, the fate of their earned benefits is the ultimate “pocketbook issue.”  According to the Center for Budget and Policy Priorities (CBPP), Social Security provides the majority of income to most elderly Americans.  Some 40 percent of seniors rely on their Social Security checks for at least 90 percent of their income. Medicare beneficiaries spend 25% of their income on out-of-pocket medical costs. As time goes by, more and more of their Social Security benefit checks will be consumed by rising health care costs.

Plainly put, millions of American seniors are feeling the pinch. They need a raise in the form of bigger Social Security checks and expanded Medicare benefits.  The average Social Security retirement benefit is a little more than $1400 per month – enough to keep most seniors out of poverty but by no means extravagant.  Our organization often hears from beneficiaries who are grateful for Social Security, but still are living hand to mouth.

A retiree named Shirley says that her Social Security benefit pays for gas, electric, groceries, and clothing. “Without Social Security, which my husband and I paid into for up to 50 years, we would have to be on welfare,” she explains. …