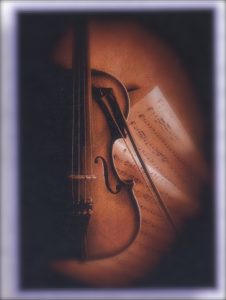 Since the late 1960s, NPR’s Ned Wharton‘s brother Geoffry Wharton has worked as a professional violinist in Europe. Wharton often played jazzy pieces by a rather obscure composer named Audrey Call as encores. Maybe to Europeans it was the exotic sound of jazz being played at classical concerts that won their hearts, but Call’s “Witch of Harlem” became a hit within Wharton’s performances.

Wharton’s discovery of Call’s musical gems dates back almost 50 years, to when he was a student at Sacramento State in 1969. One day, as he was rehearsing in a practice room, Wharton discovered some unfamiliar sheet music sitting on a shelf. Wharton read them with a pianist friend, and the pieces soon after became a common fixture of his recitals as encores. So just how did this collection of jazzy tunes end up in Wharton’s hands?

“I’m not really sure how it got into the practice room. There might have been some magic involved,” he says.

The mysterious story of Audrey Call grew over the following decades, as Wharton tried to research the composer. He wrote to Call’s publisher, Carl Fischer, in New York. The company responded, saying they knew of three of her pieces, which they published in 1937, but didn’t have any biographical information. Wharton continued to look, and, with the introduction of Internet search engines, he finally got a hit. …