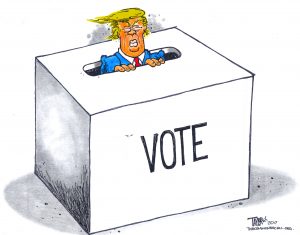 Over the weekend, there were a couple of ominous, if overlooked, statements from Republican officials touching on the upcoming midterm elections. In a radio interview, National Security Adviser John Bolton sang the new administration* tune of how what we really should be watching as regards outside interference in our elections is what China is doing. From the Washington Free Beacon:

“On Chinese election meddling, Bolton said the problem is serious. “We are very worried about the question of Chinese interference not just in individual elections, but more broadly trying to influence the American political discussion with an influence campaign that I think could well be unprecedented,” he said.

“Echoing declassified intelligence made public during a speech by Pence, Bolton said the Beijing influence operations must be stopped. “I think the United States needs to stand up, frankly, to any foreign government that thinks it’s going to interfere in our politics,” he said. “We are a self-governing people. We will govern ourselves. We don’t need international institutions to tell us how to do it. And we particularly don’t need foreigners trying to exert undue influence over us.””

And then, down in Georgia, Brian Kemp, the Republican Secretary of State and current GOP candidate for governor, has been spreading the word that Stacey Abrams, his Democratic opponent, has been arranging for undocumented immigrants to vote in November. He has been sending out mailers to that effect. From Mother Jones:

“The back side of the mailer features an image of Abrams and says she’s “too extreme for Georgia.” His proof: Kemp says Abrams intends to turn Georgia into a “sanctuary state” and would “allow illegal immigrants to vote.” It’s a sly political maneuver on Kemp’s part, but it’s also false. …”