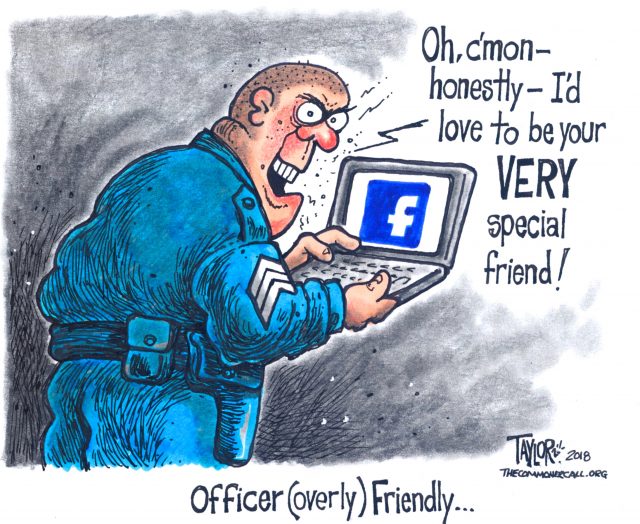 In the summer of 2015, as Memphis exploded with protests over the police killing of a 19-year-old man, activists began hearing on Facebook from someone called Bob Smith. The name was generic, and so was his profile picture: a Guy Fawkes mask, the symbol of anti-government dissent.

Smith acted as if he supported the protesters, and, slowly, they let him into their online community. Over the next three years, dozens of them accepted his friend requests, allowing him to observe private discussions over marches, rallies and demonstrations. In public postings and private messages he described himself as a far-left Democrat, a “fellow protester” and a “man of color.”

But Smith was not real. He was the creation of a white detective in the Memphis Police Department’s Office of Homeland Security whose job was to keep tabs on local activists across the spectrum, from Black Lives Matter to Confederate sympathizers.

Many scholars who worry that expanded social media surveillance could make people less likely to engage in online activities protected by the First Amendment, from sharing their opinions to organizing protests of the government.

The detective, Tim Reynolds, outed himself in August under questioning by the American Civil Liberties Union of Tennessee, which sued the police department for allegedly violating a 1978 agreement that prohibited police from conducting surveillance of lawful protests. The revelation validated many activists’ distrust of local authorities. It also provided a rare look into the ways American law enforcement operates online, taking advantage of a loosely regulated social media landscape — and citizens’ casual relinquishing of their privacy — to expand monitoring of the public.

Police officers around the country, in departments large and small, working for federal, state and local agencies, use undercover Facebook accounts to watch protesters, track gang members, lure child predators and snare thieves, according to court records, police trainers and officers themselves. Some maintain several of these accounts at a time. The tactic violates Facebook’s terms of use, and the company says it disables fake accounts whenever it discovers them. But that is about all it can do: Fake accounts are not against the law, and the information gleaned by the police can be used as evidence in criminal and civil cases.

Investigators know this, which is why the accounts continue to flourish. …