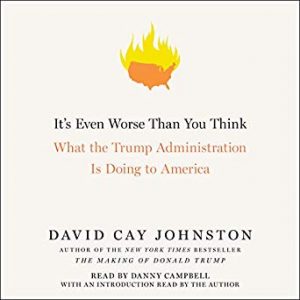 David Cay Johnston discusses his book, “It’s Even Worse Than You Think” at Politics and Prose on 1/24/18.

Johnston, a Pulitzer Prize-winning investigative reporter, has been covering Trump since 1988. In June 2015, he was the first national journalist to write about a possible Trump presidency and in his 2016 bestselling The Making of Donald Trump he gave a comprehensive account of Trump’s business practices, associates, and family background. Now Johnston follows up that profile with a detailed analysis of the Trump administration’s first one hundred days. He shows how Trump’s policies are affecting ordinary people’s jobs, finances, and security, explains the federal agencies charged with carrying out Trump’s executive actions, and illuminates places where the system can hide what’s really going on.