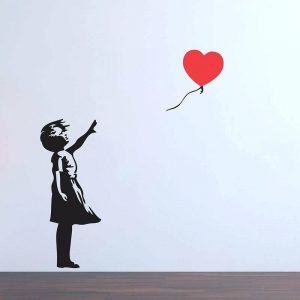 With a direct strike against the grotesque economic inequality that is ravaging societies around the globe, the artist Banksy pulled off a spectacular stunt Friday night when a piece of his artwork—a painting titled “Girl With Balloon” which had just sold for an outrageous $1.4 million—self-destructed right be the eyes of the shocked plutocrats viewing it at the Sotheby’s auction in London.

With a secret shredder hidden within the walls of the painting’s frame, the incident was capture live on video and Banksy himself used his Instagram feed to show the shocked look on the faces of those witnessing the moment as he declared: “Going, going, gone…” to his millions of followers.

Link to Story and 40-Second Video

Banksy’s ‘Dismaland’: ‘amusements and anarchism’ In Artist’s Biggest Project Yet

He describes it as a “family theme park unsuitable for small children” – and with the Grim Reaper whooping it up on the dodgems and Cinderella horribly mangled in a pumpkin carriage crash, it is easy to see why.

Banksy’s new show, Dismaland, which opened on Thursday [Note, this is a 2015 story. — Editor] on the Weston-super-Mare seafront, is sometimes hilarious, sometimes eye-opening and occasionally breathtakingly shocking.

The artist’s biggest project to date had been shrouded in secrecy. Local residents and curious tourists were led to believe that the installations being built in a disused former lido called Tropicana were part of a film set for a Hollywood crime thriller called Grey Fox.

What does it all mean? “I guess you’d say it’s a theme park whose big theme is – theme parks should have bigger themes,” said Banksy.

The name is a play on Disneyland, but Banksy insisted the show was not a swipe at Mickey and co. “I banned any imagery of Mickey Mouse from the site,” he said. “It’s a showcase for the best artists I could imagine, apart from the two who turned me down.”

Works by 58 handpicked artists including Damien Hirst and Jenny Holzer have been installed across the 2.5-acre site. Julie Burchill has rewritten Punch & Judy to give it a Jimmy Savile spin. Jimmy Cauty, once part of the KLF, is displaying his version of a fun model village complete with 3,000 riot police in the aftermath of major civil unrest.

In one tent would-be anarchists can find out how to unlock the Adshel posters seen at bus stops. For £5 people can buy the tools to break into them, replacing the official posters with any propaganda they please. Is it legal? “It’s not illegal,” said the vendor.

Across the way is a “pocket money loans” shop offering money to children at an interest rate of 5,000%. In front of its counter is a small trampet so children can bounce up to read the outrageous small print drawn up by artist Darren Cullen. …

Read the Rest and 30-Second Video