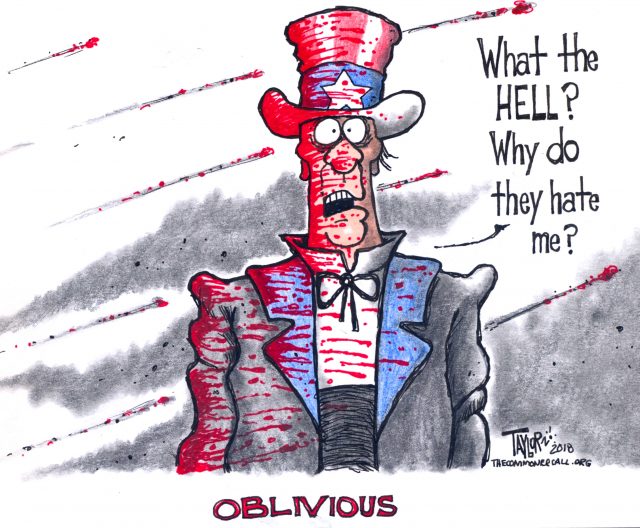 “If the American people can take back control of what is being done in our name, maybe we can finally begin washing away this spreading moral stain.”

[Editor’s Note: Once again, an atrocity in our name and on our dime. As Americans, we are all morally responsible. — Mark L. Taylor]

As funeral ceremonies for the 51 Yemenis—including 40 young children—massacred by the latest U.S.-backed Saudi bombing took place in the war-torn district of Saada on Monday, cellphone footage captured by one of the murdered children just moments before the coalition’s airstrike hit shows the dozens of kids excitedly gathered on a bus for a long-awaited field trip celebrating their graduation from summer school.

According to CNN—which obtained and publishedthe footage on Monday—most of the children on the bus were killed by the Saudi airstrike less than an hour after the video was captured.

This is just the latest horrific attack on civilians by the Saudi-led coalition, which has received explicit military and political backing from the United States. Images sent to Al-Jazeera by Yemen’s Houthi rebels suggest that Mark-82 bomb—which is manufactured by the massive American military contractor Raytheon—was used in the strike, though the photos have yet to be independently verified.

According to the Houthi Health Ministry, 79 people in total and 56 children were wounded in the attack, which quickly drew condemnation and demands for an independent investigation from international humanitarian groups, the United Nations, and a small number of American lawmakers.

Images sent to Al-Jazeera by Yemen’s Houthi rebels suggest that Mark-82 bomb—which is manufactured by the massive American military contractor Raytheon—was used in the strike, though the photos have yet to be independently verified.

“By backing the Saudi coalition’s war in Yemen with weapons, aerial refueling, and targeting assistance, the United States is complicit in the atrocities taking place there,” Sen. Bernie Sanders (I-Vt.) wrote on Facebook. “We must end our support for this war and focus our efforts on a U.N.-brokered cease-fire and a diplomatic resolution.”

As Al-Jazeera notes, the U.S. “has been the biggest supplier of military equipment to Riyadh, with more than $90 billion of sales recorded between 2010 and 2015.”

Meanwhile, President Donald Trump has enthusiastically continued the long-standing U.S. policy of backing the Saudi regime no matter how many innocent people it slaughters in Yemen, openly applauding the kingdom for buying so much American weaponry.

Blood of children on OUR hands

Ahead of Monday’s funerals for the dozens of children murdered by the Saudi-led coalition last week, images on social media showed Yemenis digging graves in preparation for the ceremonies.

As Philly.com‘s Will Bunch noted in a column on Sunday, the Saudi-led coalition’s school bus bombing forced the corporate media—which has almost completely ignoredthe humanitarian crisis in Yemen—”to pay at least a little bit of attention.”

“It shouldn’t have taken so long,” Bunch wrote. “This blood is on America’s hands, as long as we keep sending the bombs that kill so many Yemenis, and as long as we give the Saudis our unqualified diplomatic support in a messy regional conflict. And yet there’s been no public debate about the murky U.S. role out of this, and no clarification from the White House or the Pentagon over what we hope to accomplish by our support of the mayhem.”

“If the American people can take back control of what is being done in our name,” Bunch concluded, “maybe we can finally begin washing away this spreading moral stain.”

(Warning, the video is as graphic as it is important for every American to watch. CC Ed.).

IN THE WAKE of a U.S.-backed bombing last week that killed dozens of children on a school bus in north Yemen, Sen. Elizabeth Warren is demanding answers about how U.S. military advisers support and oversee the Saudi and UAE bombing campaign in Yemen.

Warren sent a letter on Tuesday to Gen. Joseph Votel, head of U.S. Central Command and top commander for U.S. forces in the Middle East, requesting that he clarify past congressional testimony about the U.S. role in the Yemen war. Warren’s letter referenced an article by The Intercept about an airstrike in May, based on a U.S. intelligence report that recounts in detail, minute by minute, how the strike unfolded and American munitions were used.

Since the beginning of the war, U.S.-backed airstrikes have hit countless civilian targets, including schools, hospitals, and food and water infrastructures.

Votel has previously suggested that the U.S. has little knowledge about how Saudi Arabia and the UAE use American weapons, and does not track the aircraft missions that the U.S. helps refuel. During a congressional hearing in March, Warren asked Votel whether CENTCOM tracks what aircraft do after the U.S. refuels them. He responded, “Senator, we do not.” Votel also denied knowing whether U.S.-produced munitions were used in specific strikes when the media has reported on civilian deaths.

However, earlier this month The Intercept published a detailed article about a coalition airstrike in May, which targeted a site in Yemen’s Northern Saada governorate where a dozen family members slept in tents; the bomb happened to miss the tents, so the civilians survived. The article quoted an intelligence report that includes “what appear to be comments from an American intelligence analyst” who closely supervised the strike from a coalition command center in Riyadh, suggesting that U.S. military observers have detailed information about how strikes unfold.

Eric Eikenberry, an advocacy officer for the U.S.-based Yemen Peace Project, told The Intercept that the existence of an intelligence report shows that coalition airstrikes are more closely supervised than Votel had indicated. “When it comes to Yemen, the priorities of General Votel and the rest of the administration are obscene,” he wrote in an email. “We knew that the United States was providing the fuel, weapons, and intelligence for coalition strikes, and now we know that the U.S. is perfectly capable of assessing strikes on civilian targets that use U.S. munitions.”