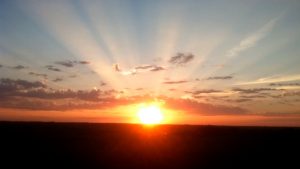 “I actively work to be hope-oriented.”

Sometimes a wave of climate grief breaks over me. It happens unexpectedly, perhaps during a book talk, or while on the phone with a congressional representative. In a millisecond, without warning, I’ll feel my throat clench, my eyes sting, and my stomach drop as though the Earth below me is falling away. During these moments, I feel with excruciating clarity everything that we’re losing—but also connection and love for those things.

Usually I don’t mind the grief. It’s clarifying. It makes sense to me, and inspires me to work harder than ever. Occasionally, however, I feel something quite different, a paralyzing sense of anxiety. This climate dread can last for days, even weeks. It can come with nightmares, for example, my favorite shady oak grove baking in the full sun of a heat wave, the oaks all dead and gone. During these periods, writing about climate change becomes all but impossible, as if hundreds of thoughts are jostling to squeeze through a narrow doorway onto the page. My scientific output slows to a trickle, as well; it feels like it just doesn’t matter.

I sense a social barrier to talking about these emotions. If I bring up climate change in casual conversation, the topic is often met with awkward pauses and the polite introduction of new subjects. Aside from increasingly frequent articles in the news about the typically incremental and sometimes disastrous progression of climate breakdown, we seldom talk about it, face to face. It’s as though the topic is impolite, even taboo.

With so much at stake—our security and normalcy; the futures we’d envisioned for our children; our sense of progress and where we fit in the universe; beloved places, species, and ecosystems—the psychology is going to be complex. So I reached out to Renee Lertzman to gain insight into how we’re coping with such huge impending losses. Lertzman is a psychologist studying the effects of environmental loss on mental health and the author of Environmental Melancholia: Psychoanalytic Dimensions of Engagement.

“There is overwhelming research that distress and anxiety relating to climate is on the rise,” she told me. “Many people, I’d argue, are experiencing what I’d call a ‘latent’ form of climate anxiety or dread, in that they may not be talking about it much but they are feeling it.”

If we’re feeling these emotions or if we know others who are, it would be helpful to talk about them. “The main thing is that we find ways to talk about what we are experiencing in a safe and nonjudgmental context, and to be open to listening. All too often, when anxiety or fear comes up, we all want to push it away and move into ‘solutions.’”

A 2017 report by the American Psychological Association found that climate change is causing stress, anxiety, depression, and relationship strain. The psychological weight of climate change can lead to feelings of helplessness and fear, and to climate disengagement. Not surprisingly, those directly impacted by climate-augmented disasters fare even worse: For example, after Hurricane Katrina, suicide in affected areas more than doubled; the situation in post-Maria Puerto Rico is similarly dire. In general, suicide is projected to rise dramatically due to climate change; in addition to the psychological toll, our brains don’t respond well physically to excessive heat.

To think daily about climate change and any of its dire implications can be a crushing psychological burden. Each of us is just one mammal, with all our mammalian limitations—we get tired, sad, irritated, sick, overwhelmed—and the climate crisis wields the force of 8 billion humans with infrastructure, corporations, capital, politics, and imaginations heavily invested in burning fossil fuel.

“It’s important to remember that inaction is rarely about a lack of concern or care, but is so much more complex,” Lertzman said. “Namely, that we westerners are living in a society that is still deeply entrenched in the very practices we now know are damaging and destructive. This creates a very specific kind of situation—what psychologists call cognitive dissonance. Unless we know how to work with this dissonance, we will continue to come up against resistance, inaction, and reactivity.”

I’ve been working through my own climate dissonance since 2006, back when the atmospheric carbon concentration was just 380 parts per million. That year I reached a tipping point in my own awareness of what was happening and what it meant. It was challenging to carry that knowledge when no one close to me seemed to care. But, said Lertzman, “we need to be careful not to make assumptions about other people’s relationships with these issues. Even if people may not be showing it, research shows again and again that it’s still on their minds and a source of discomfort or distress.” If she’s right, maybe the sea change in public action we desperately need is closer than it seems. It would certainly be helpful if we could talk openly about how climate change is making us feel.

Things do feel somewhat different now, both because more people are calling for action than in 2006 and also because I’m now part of communities with people who are as concerned as I am (for example, my local chapter of Citizens’ Climate Lobby). There are more people in my life talking openly about climate change. And that helps.

Another way I cope is by simply burning less fossil fuel. This eliminates internal cognitive dissonance by aligning my actions with my knowledge. It also brings some great fringe benefits, such as more exercise from biking, healthier eating through vegetarianism, more connection to the land through gardening, and more connection to my community through activism and public outreach.

Finally, I actively work to be hope-oriented. In the film Melancholia, about a mysterious planet on a collision course with Earth, the protagonist passively accepts, even embraces, apocalypse. Nothing can stop it; ecological annihilation is inevitable.

Modern climate change is completely different: It’s 100 percent human-caused, so it’s 100 percent human-solvable. If humans pulled together as if our lives depended on it, we could leave fossil fuel in a matter of years. This would require radical change across global society, and I’m not suggesting it will happen. But it could, and this possibility leaves open a middle path, something between sweeping climate action and an unavoidable planetary collision—a rapid cultural shift, one that we all can contribute to through our conversations and our daily actions. And that’s a very hopeful thing.

If you’re having suicidal thoughts, or know someone who is, call the National Suicide Prevention Lifeline at 1-800-273-8255 (TALK).

(YES! Magazine encourages you to make free use of this article by taking these easy steps. Creative Commons License)