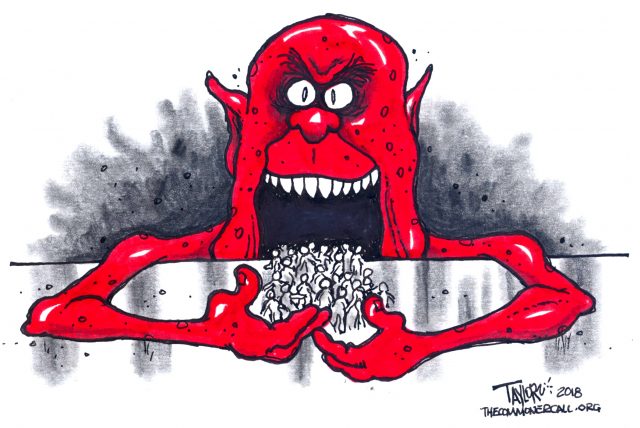 As practised and professional a liar as he is, in that moment Corey Lewandowski was the most honest man in America.

Sometimes there is moment, a single glimpse, a small flash of reality that slices through mountains of reports and hours of media, and reveals more insight than weeks of punditry. It may be an unguarded flash in a politician’s eye, a shift in posture at a critical moment, a small gesture, a reflexive, unguarded retort, a certain tone of voice that suddenly embodies the core truth of a person or movement. Such moments cut through all the hype and lies and big money propaganda, crystallizing the true core of what is happening.

Just such a moment occurred Tuesday when former Trump campaign manager Corey Lewandowski gave a simple two-word response during a Tuesday Fox News interview. Democratic strategist Zac Petkanas was talking about the Trump border child kidnapping program and mentioned the incident of a 10-year old girl with Downs syndrome who had been kidnapped by federal agents and for awhile was missing.

Sounding a little like the chorus line for the Rolling Stones “Sympathy For The Devil’, Lewandowski interrupted, with a laconic, “Womp, womp.”

A disbelieving and outraged Petkanas went full throttle in response. All of his outrage was understandable but what we need to get — the important moment of the exchange — is the moral abyss echoing with Lewandowski’s simple, lazy, “Womp, womp.”

That smug, cocksure dismissive casual cruelty is the core of what we are facing. As practicsed and professional a liar as he is, in that moment Corey Lewandowski was the most honest man in America. As bad as things have become, we have seen nothing yet.

We are facing true evil.

The Nazis didn’t begin with fully staffed, smoothly running concentration camps. No, it began small; there was an inevitable trajectory set in place. The mentally and physically handicapped were the first to be targeted in an effort to “purify” the genetic pool. That same brand of coldly cruel insanity — true evil — is at the core of the Trump movement and Lewandowski offered us all the gift of an unfiltered glimpse. But can we look unblinkingly into that cesspit of cruelty — that madness — and really get what is happening and be ready to stand and resist?

Do we really think such tactics will be limited to immigrant children?

The heirachy of the Democratic Party has given scant evidence that they really understand. Most lefties I know have their outrage about the political moment and think in terms of election tactics and strategy, and getting out the vote. All are important, but I wonder: Do they really get what we are facing? I have my doubts.

We were at a similar moment in late 2015 when most folks were dismissive of a Trump victory:

Don’t be ridiculous, the American people would never elect a clown like Donald Trump. Things are bad, but not that bad. This is America, we won’t allow someone like Trump to win.

Even if the midterms provide some level of tactical check on Trump the evil of his movement will remain and a temporary midterm defeat might actually be just the thing it needs to hurtle forward. Never forget, the clownish Hitler and his bizarre movement suffered a number of defeats, including some prison time, yet…

If the democrats do win but follow their usual limp, tepid path one wonders what they really offer as an alternative. And if they don’t bring meaningful relief — real relief — beyond the boardrooms of corporate America, what then?

Steel yourself, folks. It’s about to get a lot worse and time is short.

(Commoner Call column and cartoon by Mark L. Taylor, 2018.Open source and free for unon-derivative use with link to www,thecommonercall.org )

Tuesday afternoon Jason Rittereiser announced that his law firm, HKM Employment Attorneys, is offering pro-bono legal advice to “federal and state employees who refuse to enforce Trump’s policy of separating children from their parents,” according to a press release.

Federal employees who don’t want to separate an asylum-seeking mother from her child, tell kids in cages that they can’t hug each other, or otherwise do anything else they reasonably believe isn’t legal can contact the firm.

HKM operates out of 8 different states, including Washington, but firm partner Dan Kalish says their lawyers can represent federal employees anywhere in the United States. “We don’t have to be licensed in Texas to represented a federal employee in Texas.” …
Read the Rest