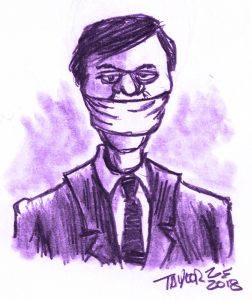 “Trump’s statement that immigrants will ‘infest our country’ probably sounds better in the original German.”

What we have seen in the southwest this week is not a law enforcement “separation”; it is government child abuse and kidnapping, which is in step with the oily history and brutal traditions of all totalitarian regimes. Wake up folks, if you think this couldn’t happen to your own families you are living a dream. In fact, this is already part of the story of what this nation has done with official policy to African American and Native American families in the past. This is more than disgusting, it is fascism.

While it is all quite fearful, we cannot be frightened. We need to steel ourselves for what this past week has only been a bitter taste of things to come.

Late Wednesday Trump issued an executive order supposedly ending the administration’s child kidnap operation. The over 2,300 infants to teens already kidnapped and imprisoned are not included in the order. What all it exactly means and how the order will be deployed — or sabotaged — by this notoriously dishonest administration is anyone’s guess. After all, has Trump ever lied to us? Well, maybe not in the last five minutes.

What is coming next is anyone’s guess, but for any student of history the trajectory is clear that things will get worse. There will be new outrages and brutalities. We will be herded downward into deeper depths of depravity, casual cruelty and manipulations of fear and hate than we have ever imagined but familiar territory to the innocents of other authoritarian regimes.

The other truth: this is not American politics as usual. This is a whole different game and those of us on the left have a lot to learn and we need to learn it quick. We have to bend, stretch and break the bounds of what we think American fascists are capable of. While it is all quite fearful, we cannot be frightened. We need to steel ourselves for what this past week has only been a bitter taste of things to come.

In the meantime, to get up to speed at what is rolling toward us, check out this talk by Yale historian Timothy Snyder, author of “Twenty Lessons From The Twentieth Century”: 47-Minute Video

The president is using kids and a functioning federal government as bargaining chips.

As the Trump administration continues to double down on its policy of separating parents from their children at the border and placing said children in cages, the president and his attorney general, who ordered the strategy in April, have told traumatized parents, the outraged public, and factions of Congress that there’s one surefire way to put a stop to this mess: comply with their ransom demand. On Monday, Jeff “We’re only Nazi Germany–esque” Sessions told the National Sheriffs’ Association, “If we build a the wall, if we pass legislation to end the lawlessness, we won’t face these terrible choices,” echoing a report from Axios that Trump views the breaking up of families “as leverage for a border wall.” But because the president of the United States doesn’t understand how the government works, he and his bloodthirsty Chihuahua Stephen Miller will not be satisfied by mere congressional approval of and partial funding for a pointless, ineffective border wall. No—for Trump to even think about ending a policy that will undoubtedly leave thousands of children scarred for life—something that’s fully in his power to do—he wants the full $25 billion, and he wants it now. Per Politico …

As Hours Passed The Mothers Realized Their Kids Were Not Returning

“You can’t ask them about their families,” the agent told the reporter. “They are in my custody.”

The Boston Globe reports that Border Patrol agents are lying to parents, telling them their children are being taken for a bath. Agents of the US government then kidnap these children and send them thousands of miles away from their parents.

“The Trump administration’s policy of splitting up families is creating a burgeoning population of dislocated and frightened children, held in makeshift detention centers near the border, including one in a former Walmart, or scattered in shelters and foster homes across the country. As the children and parents experience the fallout of forced separation by US authorities, advocates are struggling to get even basic information about the location and status of these detainees. […]

“Aleman-Bendiks, the public defender, said several of her clients have told her their children were taken from them by Border Patrol agents who said they were going to give them a bath. As the hours passed, it dawned on the mothers the kids were not coming back.

Leave it to Border Patrol and ICE to turn children’s bath-time into a nightmare.

The Globe also reports on the Kafkaesque nightmare Trump/Sessions/Kelly have intentionally created for parents who want to find their children:

“In late May, separated parents in McAllen were given a number to call HHS and try to locate their children. It was the wrong number. Last week, parents were given a handwritten note telling them to call ICE — not HHS — if they wanted information about how to reunite with their children. But parents did not have access to phones at the time, rendering the number useless. — www.bostonglobe.com/…”

Rep. Pramila Jayapal (D-WA) visited an immigrant detention center near Seattle where several immigrants and asylum-seekers have been sent:

“The women were in three separate concrete pods when she visited, and Jayapal said she and an interpreter first asked    them to respond to questions by raising their hands. She asked how many were mothers who had been forcibly separated from their children: More than half of the women raised their hands. Some said that their children had been as young as 12 months — and many no longer knew where their children were being held.

“It was absolutely heartbreaking. And I’ve been doing immigration-rights work for almost two decades. I am not new to these stories,” Jayapal told The Washington Post on Sunday. “I will tell you there was not a dry eye in the house. … Some of them heard their children screaming for them in the next room. Not a single one of them had been allowed to say goodbye or explain to them what was happening.” — www.washingtonpost.com/…

“They literally never had a chance to say goodbye to their children. Some of the children are as young as 6, perhaps younger. These women have no idea, in the vast majority of these cases, where their children are,” she added. — thehill.com/…

A Federal Public Defender On Immigration Cases And Separations

NPR’s David Greene talks with federal public defender Erik Hanshew of El Paso, Texas about the difficulties of representing immigrant clients who have been separated from their children.