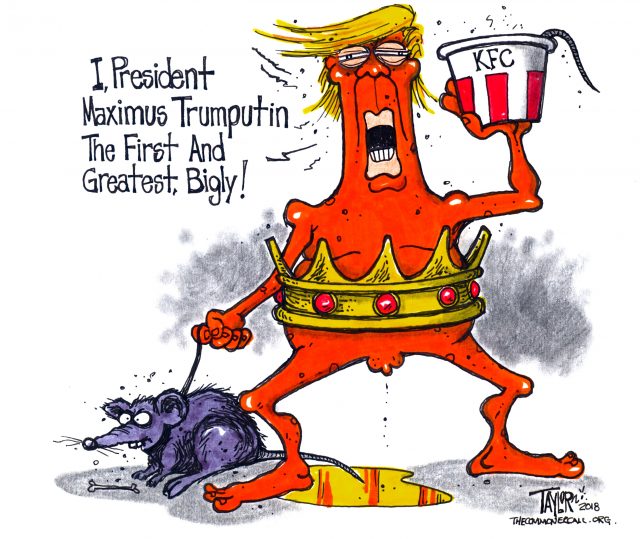 “The imperial stage of this presidency has well and truly begun.”

By Jack Holmes
Esquire (6/4/18)
While you were enjoying the second weekend of summer, the president and his allies were waging a sustained campaign to suggest the law does not apply to him. Things kicked off with the (probable) leak of a letter Trump’s legal team sent to Special Counsel Robert Mueller, published by The New York Times, in which we learned that Trump essentially has unlimited power and authority—you know, like a king. The letter suggested that:

If the president believes he can do as he wishes because he has unlimited authority, and a section of the nation backs him simply because he is the authority, you are dealing with an authoritarian movement that could support a tyrant. The alarm bells should be ringing.

Does this sound like the elected president of a democratic republic to you? The key is that his lawyers probably don’t even believe some of this, at least as it relates to the Constitution of the United States. Initially, it was part of their efforts to prevent his having to sit for an interview with Mueller, which they became convinced would end in disaster. Now, if indeed it was their leak, it appears to be part of a sustained public relations campaign to get his section of the country rallied behind the idea that the president can do whatever he wants because he is the president.

In fact, it’s now a secondary concern whether Trump did indeed do what he’s accused of. …

Read the Rest and Related Videos

Trump Is Consolidating Power Based On Deceit At An Alarming Rate, And Getting More Popular As He goes

The prion disease began when the party ate the monkeybrains provided by Ronald Reagan, who served up crackpot economics leavened with a cynical alliance with splinter American Protestantism.

Here’s what I learned during my brief sabbatical last week: if you ignore it, it only gets worse.

The president*, installed at least in part by ratfckers in the employ of a former KGB thug now running a murderous kleptocracy, has at his easy disposal everything a dictator could possibly want. He has combined an instinctive contempt for democratic government with a swindler’s nose for easy cash and a junkie knifepoint robber’s reckless disregard for consequences. He has a tight, loyal cabal of flunkies who’d be chasing ambulances if it weren’t for their talents as sycophants. He has a largely impotent political opposition and a largely supine congressional majority. He is one vote away from a rubber-stamp Supreme Court.

He is succeeding in his campaign to delegitimize any criminal investigation of his various schemes; he’s managed to put Jefferson Beauregard Sessions III on the right side of things. Hostile press, he can easily ignore. He is consolidating power based on deceit at an alarming rate, and, worst of all, he is becoming more popular for doing so among the only voters that matter to him.

As for the Democrats, they proved completely unable to accomplish the fundamental democratic duty of an opposition party: to crush the cruelty and lunacy of the Republicans at the polls until the Republicans regained their sanity.

According to the good folks at Gallup, the president*’s approval rating among Republicans is the highest of any Republican president since World War II at this point in his administration* with the exception of where George W. Bush was at immediately after the attacks of 9/11. He stands at 87 percent approval among Republicans. (Administration remoras already are fudging this data to imply that the president* is the most popular president at 500 days since World War II. A considerable number of people probably believe that by now.)

I know I occasionally am criticized for being harder on the NeverTrump Republicans than I should be—any port and all that—but many of them played prominent roles over the past four decades in fashioning a political party 87 percent of which approve of the slow-rolling catastrophe that is only now really picking up speed. It is entirely possible that the momentum now is unstoppable. The country is hurtling toward the destruction of its most basic ideas about itself, and some of these people played a leading role in constructing the handbasket. There has to be an accounting for that, somehow.

Mercy! How did this happen?

The prion disease began when the party ate the monkeybrains provided by Ronald Reagan, who served up crackpot economics leavened with a cynical alliance with splinter American Protestantism. It has gathered strength within the party, its symptoms becoming more and more obvious year after year.

Iran-Contra. Willie Horton. Atwater. Rove. Falwell. Graham. Luntz. Bauer. Gingrich. The Impeachment Kabuki. Florida. The lies undermining the Iraq War. Gay-baiting in the 2004 elections. The U.S. Attorneys scandal. Phony charges of voter fraud. The barbaric use of Terri Schiavo for political gain. The unprecedented obstruction, based in overt racism, of Barack Obama. The tolerance of Louie Gohmert, Steve King, Blake Fahrenhold, and Michele Bachmann. The endless flogging of the events at Benghazi.

And, finally, confronted with genuine, uncut, unfiltered, un-consulted authoritarianism, these people affect surprise that their party was ready for this president* or someone like him? Or that their party was helpless to stop him, or to confront him once in office? The Republican party abandoned its political innocence long ago. It’s only now just noticing. …