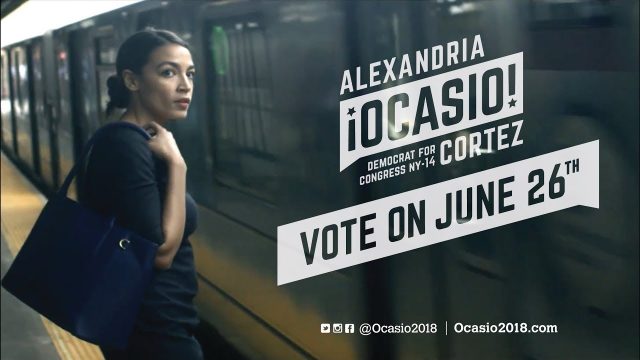 [Editor’s Note: There has long been a need for a cadre of innovative video and internet tech savvy progressives to counter the big money self-serving campaign consultants that turn so many democratic campaigns into desiccated cookie-cutter hack jobs. This story shows the power of Tech + Passion = Powerful Messaging. — Mark L. Taylor]

BRONX ACTIVIST AND community organizer Alexandria Ocasio-Cortez is challenging longtime New York Democratic Rep. Joe Crowley in his primary on June 26. By all measures, the former Bernie Sanders organizeris an underdog, going up against the powerful chair of the House Democratic Caucus who has more than $1.6 million in cash on hand (Ocasio-Cortez has raised around $200,000).

But in a social media-focused campaign video released on May 30, Ocasio-Cortez sought to turn this money gap into a liability for Crowley — telling a story about her life and the lives of thousands of other working-class New Yorkers who continue to be squeezed by the high cost of health care, education, and housing.

“This race is about people versus money,” Ocasio-Cortez says in the ad. “We’ve got people. They’ve got money.”

The success of the video shoot raises the question: Why do candidates spend so much money on high-priced consultants who produce boring, safe videos, when ideologically aligned, camera-savvy activists can do it quicker, cheaper, and with more vitality?

It’s not hard to see why. The video is tightly produced, crafting a narrative about an organizer-candidate who has the same sort of working-class background that is representative of the majority of New York’s 14th Congressional District — the median income in the district is $53,512 — taking on a powerful incumbent backed by Wall Street dollars.

What you may be surprised to find out is that the video was produced not by Hollywood video production veterans or high-dollar political consultants, but by a ragtag pair of socialists based in Detroit.

Both were veterans of other communications firms and were troubled by the fact that many of these firms worked both for progressive candidates and corporations working against the very same causes.

“It just didn’t compute to us that the same people creating working-class propaganda are creating essentially propaganda for corporations,” Hayes said.

“We did this, really, with the goal of building kind of an effective, functional left media structure,” Burton explained.

She first reached out to the Ocasio-Cortez campaign in March, after she learned about the candidate on Facebook. “Her message was bold. It was unapologetic. It had a clear leftist vision that I could understand as just a normal person, that I thought other working people could identify with,” she explained. “And after doing a little bit of digging, I realized she didn’t have a campaign video.”

So she sent Ocasio-Cortez a Twitter direct message explaining how Means of Production could help the campaign. …