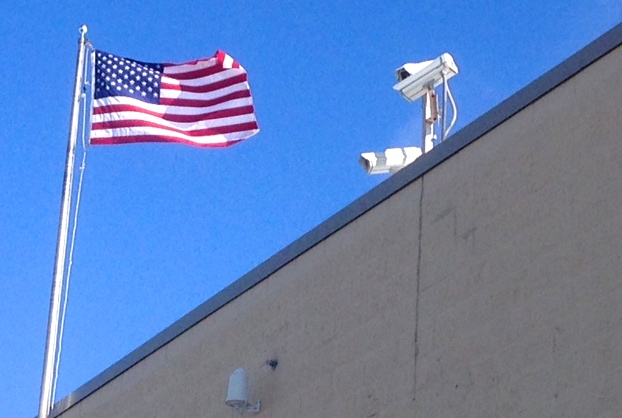 “Children should never be ripped from their families and held in secretive detention centers.”

[Editor’s Note: There is powerful symbolism in the fact that this nation has been reduced to imprisoning poor immigrant children fleeing violence in an old Walmart with blacked out windows. The image says it all of what America has become. Sen. Jeff Merkley (D-Ore) was quoted on MSNBC saying up to 1,000 children are locked up in the facility. And as the second story linked below shows, such brutality is already being turned against citizens. That is the way of tyranny. Resist … while you still can. — Mark L. Taylor]

America’s inhumane immigration system has come under growing scrutiny in recent days after President Donald Trump introduced his new policy of separating migrant children from their families, and when a sitting U.S. senator attempted on Sunday to examine the conditions of one immigrant detention center in Texas—where “hundreds” of children are reportedly being held—facility staff refused to allow him inside and called the police.

“The attorney general’s team and the Office of Refugee Settlement, they don’t want anyone to know what’s going on behind these doors,” Sen. Jeff Merkley (D-Ore) said after arriving at the Brownsville, Texas facility, which is run by the Southwest Key Program (SKP), a “non-profit” government contractor.

The detention center, which is a former Walmart with completely blacked-out windows.

Merkley didn’t simply arrive at the facility unannounced. As the Oregon senator explains at the outset of his video of the attempted visit, he contacted federal officials and SKP to request access to the detention center, which is a former Walmart with completely blacked-out windows.

After Merkley repeatedly asked officials at the facility to allow him to speak with a supervisor who could give him a tour, local police arrived and questioned the senator about his attempted entry. When a supervisor did finally emerge, he wouldn’t answer Merkley’s questions or provide any information.

Merkley’s effort to tour the secretive detention center comes after newly released documents revealed “pervasive abuse” of immigrants at such facilities during the Obama administration—treatment that has continued under the Trump administration.

“Children should never be ripped from their families and held in secretive detention centers,” Merkley wrote on Twitter late Sunday.

The senator’s effort to shed light on the living conditions of migrant children detained inside a taxpayer-funded detention facility was applauded by immigrant rights advocates, who demanded an end to the Trump administration’s “cruel, inhumane, and disgraceful policy of separating children and babies from their parents.”

“This administration be must be held accountable for its heartless and cruel policies of separating children from their families,” wrote Kristen Clarke, president and executive director of the Lawyers’ Committee for Civil Rights Under Law. “Thanks Sen. Jeff Merkley for working to expose this injustice.”

(Commoner Call photo. Open source and free for non-derivative use with link to www.thecommonercall.org )

Most mornings lately, I’ve woken up to two things. First I hear my toddler, sounding off that it’s time to get up. Then I see the news stories about other toddlers our immigration authorities ripped away from their parents.

For weeks, I’ve felt the gnawing need to write something, anything, about it. But God, where even to begin?

First, there are the stories. The Congolese asylum seeker who heard her six-year-old scream “Don’t take me away from my mommy!” and couldn’t reach her. The woman forced to put her 18-month-old in a car seat in an ICE van, the door slamming shut before she could even say goodbye. The man who hasn’t seen his son in six months.

Then there are the photos. The rows of children sleeping on thin mats behind chain-linked fences. The kids being led by guards to make phone calls, hands tied behind their backs. The prison van full of infant car seats.

These are just the earliest fruits of the Trump administration’s ghastly new pledge to prosecute every last undocumented immigrant who crosses our border. If they have their children with them, the kids are seized and warehoused in some overflowing detention facility.

These detention facilities are no place for kids. Even going back to the Obama era, immigration agents have been reported raping, beating, and threatening kids in their care. What are they hiding?

The New York Times counted over 700 kids who’d been separated from their parents this way from October to April. But in the first two weeks of May alone, authorities disclosed that they’d taken nearly 700 more — an astonishingly rapid increase. The ACLU puts the second wave at 1,000 over five weeks.

Already the warehouses are filling up, leaving authorities to prepare holding pens on military bases for the inevitable overflow.

In theory, the children should be released to other family members within 72 hours. But with the administration essentially threatening to deport any undocumented caretakers who come forth to claim them, more and more children are languishing in cells for months. NBC reported recently that over half the kids currently detained had been held past the limit, and that half of those were under 12.

“It appears we’re setting up a long-term incarceration system for children,” a former immigration official told VICE. Children whose only crime was having parents who tried to take them to safety.

The jackboots orchestrating this plot openly admit they’re willing to harm children to scare off parents.

“If you don’t want your child separated, then don’t bring them across the border illegally,” menaced Attorney General Jeff Sessions. “A big name of the game is deterrence,” chimed in Trump chief of staff John Kelly, who promised the captured children “will be put into foster care — or whatever.”

These detention facilities are no place for kids. Even going back to the Obama era, immigration agents have been reported raping, beating, and threatening kids in their care. When U.S. Senator Jeff Merkley tried to inspect a holding site this month, operators locked him out and called the police. What were they hiding?

The United Nations has warned these detentions constitute “a child rights violation” and should be “halted immediately.” Senator Dianne Feinstein has introduced a bill to end family separations for asylum seekers, while Senator Kamala Harris and Rep. Pramila Jayapal want to halt the expansion of new detention facilities.

Those would be welcome steps. But if you ask the dad in me, they should shut down the whole agency.

Support The ACLU In Defense Of Justice & Our Threatened Bill Of Rights.