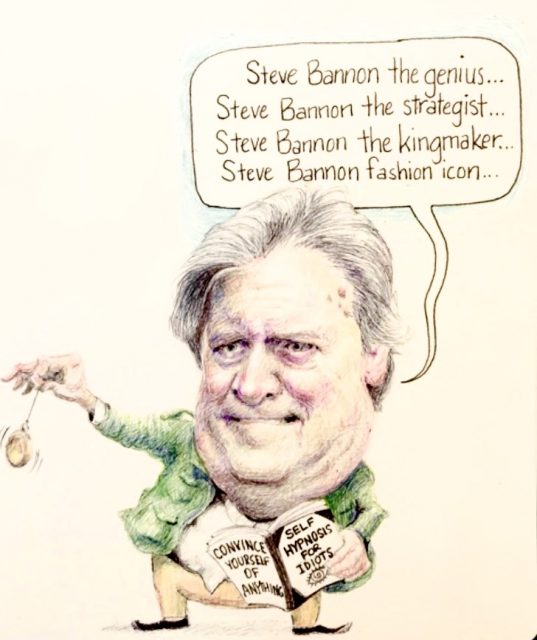 WASHINGTON ― Just a few months ago, Steve Bannon was warning “establishment” Republicans that a “day of reckoning” was at hand.

As it turns out, he was right.

Bannon, President Donald Trump’s initial top aide and self-described architect of his improbable victory, has fallen faster than might have seemed possible – from “The Great Manipulator” on the cover of Time magazine to the owner of a new, derisive Trump nickname in less than a year.

“Sloppy Steve,” Trump called him Friday ― a continuation of the criticism that began on Wednesday when the president declared in a lengthy statement that Bannon had done little for his campaign or his presidency.

Bannon did not respond to a query for comment, even as his erstwhile allies abandoned him to declare their loyalty to Trump. In a new book by author Michael Wolff, Bannon is quoted as describing first son Donald Trump Jr.’s meeting with Russians as “treasonous” and calling first daughter Ivanka Trump “dumb as a brick.”

No conclusions about Bannon’s future can be drawn with Trump as president. “Who knows, he and Omarosa could wind up back at the White House in two months.”

“I’d like to associate myself with what the president had to say about Steve Bannon,” McConnell said, referring to Trump’s broadsides against his former “chief strategist.”

“It kind of goes to what we’ve been saying all along. Candidates get themselves too close to Steve Bannon, they’re going to have to answer for his toxic views,” said Chris Pack, who is with the McConnell-endorsed Senate Leadership Fund super PAC. “It seems common sense at this point that you would not want to associate yourself with somebody who’s at war with the president of your own party.”

Other Republicans, critics of Trump as well as Bannon, wonder whether Bannon’s exile matters at all.

“At the end of the day, he is a fraud, and so is the president,” said John Weaver, who ran Ohio Gov. John Kasich’s GOP presidential campaign in 2016.

Weaver added that what Bannon does next, or does not do, makes no difference. “Trump and Bannon are backing the same people. They’re backing nutjobs who would lose the general election. Trump was the original Bannon. It’s not like Bannon’s the only alt-right loon who’s talking to the president.”

Bannon was the earliest right-wing media impresario to champion Trump. In the summer of 2015, he threw his Breitbart website and radio show behind the New York City reality TV host in a field of GOP senators and governors.

That move, though, was more about making Bannon’s anti-immigration ideology a central issue in the Republican primary ― Bannon had previously considered backing then-Alabama Sen. Jeff Sessions for the same reason ― than a belief that Trump could actually win.

When Trump wound up defeating the last of his Republican rivals in the spring of 2016, Bannon was given much of the credit. He took on an unofficial advisory role in the campaign, and then was given charge of it in late summer at the urging of Robert and Rebekah Mercer. The billionaire father and daughter team had supported Sen. Ted Cruz (R-Texas) in the primaries, but came over to Trump after he locked down the nomination. They had for years funded Bannon’s ventures, including Breitbart.

Former White House adviser Steve Bannon will not likely not be included in any future editions of Profiles in Courage after issuing a groveling apology to President Donald Trump on Sunday morning.

Only a few hours after former Bannon protege Stephen Miller tore into Bannon in a heated segment with CNN host Jake Tapper, Bannon issued a statement to Axios attempting to take back all of the comments he he made about Trump and his family — although he left some accusations hanging.

Posters on Twitter were quick to pile on Bannon, with longtime conservative commentator Bill Kristol writing, “I’m old enough to remember when Steve Bannon—whatever else one thought of him—didn’t seem to be an obsequious toady.”

That was one of the nicer things said about the Breitbart head.