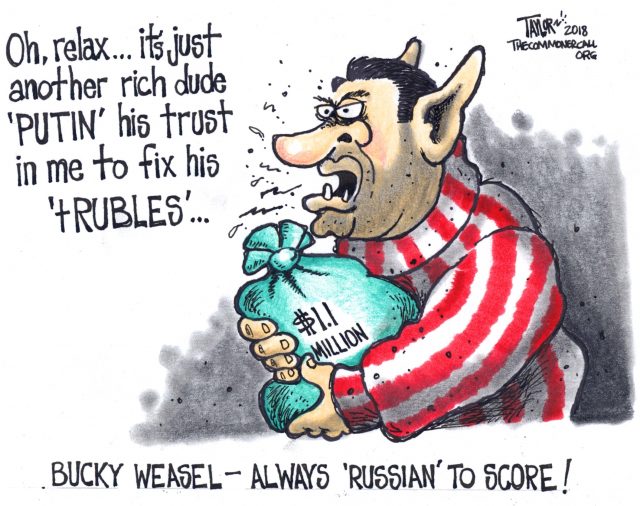 There may be another reason top Republicans have not been more vocal in their condemnation. Perhaps it’s because they have their own links to the Russian oligarchy they would prefer go unnoticed.

Party loyalty is often cited as the reason that GOP leaders have not been more outspoken in their criticism of President Donald Trump and his refusal to condemn Russia’s interference in the 2016 presidential election. Yet there may be another reason that top Republicans have not been more vocal in their condemnation. Perhaps it’s because they have their own links to the Russian oligarchy that they would prefer go unnoticed.

Blavatnik’s relationships with Russian oligarchs close to Putin …should be worrisome for Trump and the six GOP leaders who took Blavatnik’s money during the 2016 presidential campaign.

In January, Quartz reported that Blavatnik donated another $1 million to Trump’s Inaugural Committee. Ironically, the shared address of Blavatnik’s companies is directly across the street from Trump Tower on 5th Avenue in New York.

Len Blavatnik, considered to be one of the richest men in Great Britain, holds dual citizenship in the U.S. and the U.K. He is known for his business savvy and generous philanthropy, but not without controversy.

In 2010, Oxford University drew intense criticism for accepting a donation of 75 million pounds from Blavatnik for a new school of government bearing his name. Faculty, alumni and international human rights activists claimed the university was selling its reputation and prestige to Putin’s associates.

Blavatnik’s relationships with Russian oligarchs close to Putin, particularly Oleg Deripaska, should be worrisome for Trump and the six GOP leaders who took Blavatnik’s money during the 2016 presidential campaign. Lucky for them no one has noticed. Yet. …