Don Blankenship is the kind of guy who, when the mining company he runs is polluting the local water, will run a private pipeline over to the next town for his own home. And the kind of guy who, having been convicted with conspiring to break mine safety laws, leading to an explosion that killed 29 men [a total of 53 miners died in other Blankenship controlled mines with long records of safety violations], emerges from prison and announces a run for Senate. You might chuckle, but Blankenship’s confident recourse to Big Lie politics—he alleges his conviction was a state conspiracy—stands a better chance with an establishment press corps whose fears of “partisanship” make it hesitate to check lies with adequate force.

We have a reminder of Don Blankenship’s record in a 2016 interview on the subject with attorney Bruce Stanley. 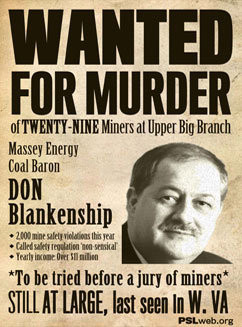