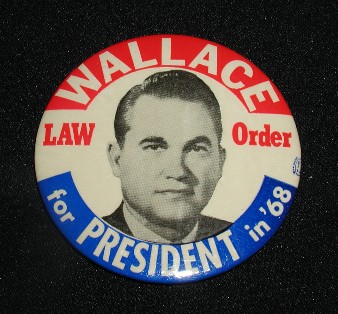 Whether Trump lasts another three weeks, another three years, or another seven years, our troubles won’t be over when he’s gone. They may well get worse.

(Editor’s Note: This is an important, excellent analysis of the American fascist right that properly explains how Trump is a product of, not the progenitor of the radical fascist right. Rich draws from the history of George Wallace, showing the parallels and the political DNA of the right wing movement going back to the 1930’s. As the internet is choked off and the Sinclair group takes over more media the threat of the radical right will increase. The defeat of Roy Moore was a sweet victory, but don’t make any rosy assumptions that the fascist fever has broken. Be sure to read this article to the end. There are several points where ads and a sidebar break make it look like you got to the end of the article but scroll on. – Mark L. Taylor)

or many, if not most, Americans, the only pleasure to be had from Donald Trump’s presidency is to imagine his premature eviction from the White House. Impeachment, the 25th Amendment, pick your poison. My own scenario places Trump on Richard Nixon’s Watergate resignation timetable, fleeing next August to Mar-a-Lago as federal bloodhounds close in on him, his son, or his son-in-law (or all three) and his party’s Vichy regime on the Hill at last mutinies in the face of what could well be an apocalyptic Election Day in 2018.

In private, Steve Bannon reportedly gave Trump only a 30 percent chance of finishing his term, even before Robert Mueller dropped his first indictments. (Bannon has denied saying this.) And there are other fresh signs of an advancing Trump expiration date besides, from the resounding Democratic wins in Virginia and New Jersey on November 7 to the epic failure of the Republican Congress to accomplish anything. But don’t celebrate just yet. Once Trump exits — whenever and however he goes — then what? It’s a continuing liberal blind spot to underestimate the resilience of Trumpism, which, if history is any guide, will easily survive both the crack-up of the GOP and the implosion of the Trump presidency. Whether Trump lasts another three weeks, another three years, or another seven years, our troubles won’t be over when he’s gone. They may well get worse. And by worse, I do not mean Mike Pence, the Koch-brothers tool so feared by liberals because he might be more efficient at bringing America to its knees than his boss. Were Pence to ascend unelected to the presidency after a Trump collapse, still more scandals would pour out, Republicans in Congress would be fighting for their political lives, the economy would be rattled, and Washington would default into faux-bipartisan our-long-national-nightmare-is-over mode until the next election. Unlike Gerald Ford, Pence might not even fill out a term as a one-and-done caretaker, given his own vulnerability to obstruction-of-justice charges.

It’s a continuing liberal blind spot to underestimate the resilience of Trumpism, which, if history is any guide, will easily survive both the crack-up of the GOP and the implosion of the Trump presidency.

What we should be worrying about instead is the remarkable staying power of the American voters who put these guys in office. They’re in for the long game no matter the fate of the current administration. Trumpism predates Trump and Pence by decades and is a more powerful, enduring, and scary force than either of them. Trump learned this himself the hard way when Alabama Republicans voting in the Senate primary this fall chose the more Trumpist candidate, the gun-totin’ crackpot bigot and alleged sexual predator Roy Moore, over Mitch McConnell’s candidate, the garden-variety right-winger Trump had impulsively and mistakenly endorsed. The toxic anger that defines Trumpism — a rage at America’s cultural and economic elites in both political parties as well as at minorities and immigrants — will only grow darker and fiercer once its namesake leaves office, no matter how he does so. If Trump departs involuntarily, his followers will elevate him to martyrdom as the victim of a coup perpetrated by the scoundrels of “fake news” and “the swamp.” If Trump serves one or two full terms, his base will still be livid because he will not have bestowed the lavish gifts he promised, from a Rust Belt manufacturing comeback to a border wall. His voters won’t pin these failures on Trump but on the same swamp creatures they’ll hold responsible if he’s run out of office. They’re already blaming the cratering of “repeal and replace” and other broken Trump promises on what Bannon and his allies call “the McConnell-industrial complex.”

Right-wing nationalist populism is nothing new in America; the genealogical lines of Trump and his immediate antecedents, Sarah Palin and the tea party, trace back at least to the later years of the Great Depression, when the demagogic and anti-Semitic radio priest Father Charles Coughlin turned against the New Deal and vilified Jewish “money changers” masterminding an international conspiracy to plunder his working-class flock. The movement was rebooted with a vengeance once the civil-rights revolution took hold in the 1960s …