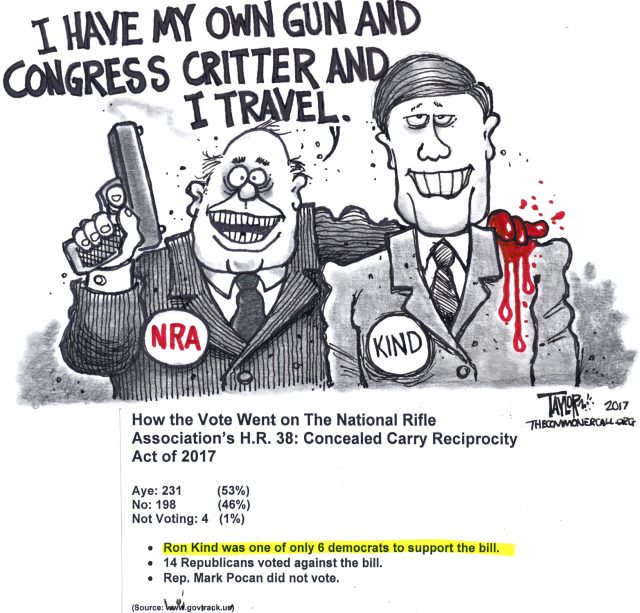 On December 6 Rep. Ron Kind joined his close pal republican Rep. Paul Ryan to fall into step with the notorious NRA and voted in support of its bill to overturn local protections against carrying concealed handguns anywhere in the nation.

The bill will go to the senate where – one hopes – saner and more compassionate hearts will prevail and kill the NRA’s murderous bill.

Today – on the 5th anniversary of Sandy Hook – keep and honor the memory of the twenty 6 and 7 year-old children and six educators murdered in the shooting, because we certainly can’t depend upon Rep. Ron Kind or his close friend Rep. Paul Ryan to do the right thing.

And As If Making Sure Guns Can Move Around The Country Wasn’t Bad Enough, Yesterday Ron Kind Failed To Sign On To The Call By 121 Congressional Lawmakers To End Restrictions On Gun Violence Research

More than 120 lawmakers are urging congressional leadership to remove controversial language from the House spending bill that has prohibited the Centers for Disease Control and Prevention from studying gun violence for more than two decades.

A coalition led by Rep. Mike Quigley (D-Ill.) sent the letter to House Speaker Paul Ryan (R-Wis.) and House Minority Leader Nancy Pelosi (D-Calif.) on Wednesday, urging them to reject the status quo and allow the government to fund research “that could help prevent gun violence while still protecting the rights of law-abiding gun owners.” …

Note To Readers: If, after the next predictable mass shooting, you hear Rep. Ron Kind mouth any platitudes about “thoughts and prayers” for the victims, tell the coward to go to hell.

(Oh, and if you donate money to Kind’s bloated corporate campaign fund then you share the moral responsibility for his cowardice on the issue to American gun violence, even when it involves the murder of children. Don’t support the coward.)

(Commoner Call cartoon and column by Mark L. Taylor, 2017. Open source and free to use with link to www.thecommonercall.org )