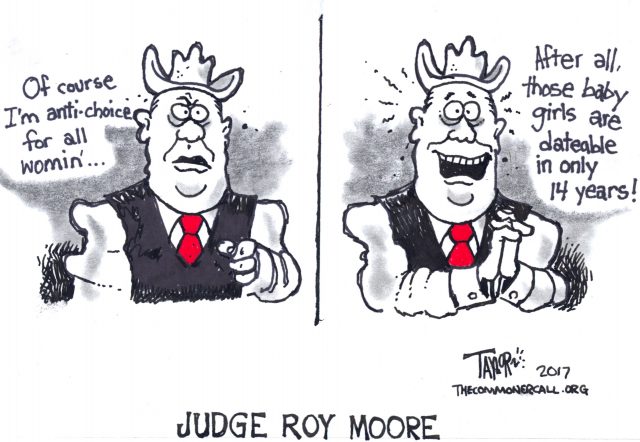 “He totally denies it. He said it didn’t happen.” – Donald J. Trump

There is a very real chance that an accused multiple child sex offender is going to be elected to the United States Senate on a Republican ticket. A man, who, in his 30’s was banned from the local mall because of his reported predatory hitting on teenage sales girls. The behavior by the young assistant district attorney – who, obviously, should have known better – was so troubling it freaked out the community. With a few notable exceptions, republicans have been pretty mum on whether or not moralistic predator Alabama Judge Roy Moore should drop out of the race for senate, or if he were to be elected, whether or not the senate should refuse to seat him.

Just as a chain is only as strong as it’s weakest link, a political party is only as legitimate as the worst characters it is willing to endorse. With Roy Moore the republicans are speaking loudly about their complete lack of values and basic morality.

Despite warnings to not do so, Donald Trump stapled Moore to the forehead of the party last week with his endorsement of Moore – based primarily it seems on wanting to have enough votes to hand over the future of the working and middleclass for the enrichment of the corporations and the wealthiest 1% (the Trump family cut from the GOP tax scam rings in at about $1 billion). With Trump’s full-throated endorsement and nobody in congress with the moral scruples to disagree with the pussy-grabber-in-chief the republicans have confirmed that they are perfectly comfortable having accused child molesters represent their party and program.

Anything, it seems, on behalf of the Wall Street alligators.

The Moore case is one of those shameful times in American politics when one can reasonably ask: “How much lower can they go?”

Well, with the republicans we have seen nothing yet. If the Mueller investigation leads to major indictments against Trump and his pals expect to see the republicans lock arms in full-throated defense of treason. When a party can cozy up to an accused – multiple – child molester it is nothing to excuse and defend treason.

As for the United States? Time to wake up, people.

Republican strategist Rick Wilson published a blistering essay at The Daily Beaston Sunday in which he said the GOP is committing an unforgivable sin by supporting “child-molesting, law-breaking, edge-case whackjob” Roy Moore.

Moore, he said, “will stain the Senate and the Republican party with his creepy sexual predilections, his contempt for the rule of law, his thinly-veiled racial animus, and his role in the firmament of Bannonite political arsonists.”

The allegations against Moore are appalling, Wilson said, but the reporting from The Washington Post and other media outlets appears to bear out the accusations of his multiple accusers.

By signing off on the “grotesque” misdeeds of “Alabama’s Uncle Creepy,” Wilson said, “the Trump Administration sent a clear signal it’s perfectly happy with Moore’s history of serial child sexual assault as long as he’s a solid vote on their tax bill.”

Wilson slammed Trump for his prior reticence on the topic of Moore, given that the president has opinions on “everything from NFL policies to NCAA basketball players to Kim Jong Un’s waistline.”

“You might have noticed that President Best Mind has many opinions he shares briskly and loudly on Twitter, generally in the mornings when he’s perched his ample backside on the golden toilet in the executive residence of the White House,” Wilson wrote. “Suddenly, nay, miraculously, Trump and his minions have no opinion on what should be done about Roy Moore. It’s an election miracle!”

He went on to detail — and then roundly debunk — possible defenses Moore’s backers could mount and noted that the vast majority of Americans believe Moore’s accusers. … Read the Rest

Alabama Senate candidate Roy Moore (R) received more than $1 million from a charity group between 2007 and 2012 for part-time work despite claiming he received no “regular salary” from the group, according to a new report.

The Washington Post reported Wednesday that Moore had arranged to take a yearly salary of $180,000 from the Alabama-based Foundation for Moral Law, a charity he founded to promote Christian values in government.

Moore told a jury in 2011 that his salary was not a “regular” one from the foundation but rather a “special project” he set up.

“My salary does not come by way of a regular salary from the Foundation, but through a special project that I run so that I don’t inhibit the Foundation,” Moore said in August of that year.

That special project was “Project Jeremiah,” a fundraising effort spearheaded by Moore that the former Alabama chief justice proposed would pay for his special salary. However, a deal with the group stated that the charity would pay the difference if Project Jeremiah was unable to fund Moore’s desired $180,000 in a given year, according to the Post.

Despite this, the group was unable to afford to pay all of Moore’s salary when he left the group in 2012 and instead gave him a promissory note that eventually became worth $540,000 or an equal stake in a historic building in Montgomery, Ala., the charity’s most valuable asset, the newspaper reported. …

If you look at Caleb Moore’s resume, his current position is assistant executive director at the Foundation for Moral Law, the organization founded by his father, Alabama GOP Senate candidate Roy Moore.

He allegedly has been in that position for three years, previously serving as an information systems specialist at the foundation from May 2013 to May 2014.

But if you ask the foundation, he is not an employee there and hasn’t been one, at least for the past year.

The Foundation for Moral Law is no doubt a family affair for the Moores. The president of the organization is Kayla, Roy’s wife. The Washington Post reported that the charity has employed at least two of the couple’s four children, although it’s not clear what their compensation was.

The foundation has been lucrative for Roy Moore. He collected more than $1 million total ― for part-time work ― as president from 2007-2012, which was far more than what the nonprofit disclosed in its tax filings.

Tax experts told The Washington Post that the foundation was suspicious because it may violate tax rules that prohibit the use of a charity for the private benefit of an individual. A board member acknowledged that it is basically run by the former chief justice of the Alabama Supreme Court and his family.

Caleb may be benefiting more from the resume boost rather than a steady paycheck. His resume, found on his LinkedIn page, is dated Feb. 27, 2017. Assistant executive director is his most recent position, from May 2014-present.

The resume is riddled with grammatical and typographical errors, such as the note that he has assisted in “managing a team of 5 attorneys’, and two office staff employees,” and has “7 years of management experience, including a two-high-level position’s.”

Despite those seven years of management experience, the resume states that he is looking for “entry-level employment.” …

Caleb Elisha Moore, 27, turned himself in and was booked at Etowah County Jail at Monday morning, AL.com reported. He was later released after posting a $1,000 bond.

Moore’s charges Monday were related to his being arrested in November 2016 for hunting without permission and hunting over bait. A sheriff’s department spokeswoman said that the owner of the land Moore was allegedly illegally hunting on signed a warrant for trespassing.

Moore has been arrested on nine occasions, including on drug charges in 2015. Those charges were dropped after he agreed to attend a pre-trial diversion program.

He has also faced driving under the influence charges in both Florida and Alabama, and has had three other drug-related arrests.

Moore’s campaign chairman said the news was “a cheap political trick to distract from the issues.” …