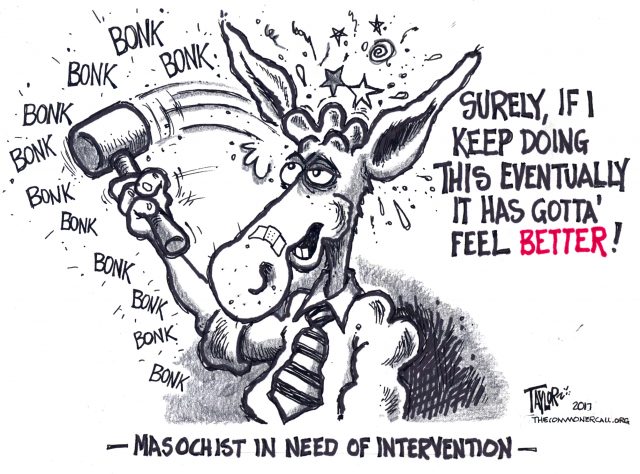 In his Monday column at the New York Times, Paul Krugman said:

“These days, America starts from a baseline of extreme tribalism: 47 or 48 percent of the electorate will vote for any Republican, no matter how terrible, and against any Democrat, no matter how good. This means, in turn, that small things — journalists acting like mean kids in high school, ganging up on candidates they consider uncool, events that suggest fresh scandal even when there’s nothing there — can tip the balance in favor of even the worst candidate imaginable.”

He’s not alone.  This is the explanation most elite media types will give for Trump’s victory, and it’s the one the neoliberal’s in the Democratic Party cling to.  It’s also the reason the Democrats are unlikely to get the House or Senate back unless Trump, McConnell, Ryan and the rest of the Republicans do something so crazy that they sabotage themselves.  With their latest health “care” gambit they may be in the process of doing just that.

Lack of an agenda

And therein lies the problem.  Democrats have no agenda, and they have no agenda because they believe the myth that the Party’s neoliberals, Krugman, Fareed Zakara, and many others of the elite media are spewing: that America is a closely divided nation that is center-right politically.

We can start with his contention that “47 or 48 percent of the electorate will vote for any Republican …” no matter how terrible and against any Democrat no matter how good.  Well, this is flat out wrong.  First of all, less than 25 percent of Americans identify as Republican.  Second of all, Trump won with only 26.1 percent of eligible voters.  Third of all, total turnout has been in the 50 to 55 percent range for four decades now (with one exception – 2008, when a little over 58 percent turned out).

Democrats have no agenda, and they have no agenda because they believe the myth that the Party’s neoliberals, Krugman, Fareed Zakara, and many others of the elite media are spewing.

This means that 45 to 50 percent of eligible voters don’t turn out. The majority of these no-shows—43 percent of eligible voters—are independents.  And these independents may lean Republican or Democrat, but they are not die-hards who give their vote to one Party or another automatically.  In fact, a poll by Pew  found that they are motivated not by loyalty to the Party they lean toward so much as hostility to the other Party’s ideas, and the majority of independents lean Democrat.  Finally, the majority of Americans lean liberal on an issue-by-issue basis.

So, Krugman’s hardcore crazies who will vote for a Republican “no matter how terrible” and against a Democrat do not make up 47 to 48 percent of the electorate, they make up a small minority of potential voters of about 25 percent. Again, Krugman is not alone in seeing the political landscape as a closely divided world in which the scales can be tipped by small things like “… journalists acting like mean kids in high school … even when there’s nothing there.”

Here’s the problem with that view. It allows neoliberal Democrats to ignore the fact that it is their policies that have caused them to lose.  They believe that little things can tip the balance, so Hillary’s loss, or the loss of the Senate, the House, and the vast majority of state governorships and legislatures is not a result of their failure to actually represent the voters’ interests over their donors, or their backing of Wall Street over Main Street, or their refusal to embrace progressive policies supported by the majority of potential voters—rather it is just little things that tipped the balance.

And as long as that scapegoat is allowed to exist, then the neoliberals will not change.  Oh, they’ll try to create the appearance of change with gimmicks like their “Better Deal,” campaign.  But at the end of the day, money will still talk, the voters will still walk, and too many crazies will still get elected.

(John Atcheson has just completed a book on the 2016 elections titled, WTF, America? How the US Went Off the Rails and How to Get It Back On Track.)

If Dems Don’t Learn This Lesson, They Deserve To Lose Forever

I’m reluctant to point this out, lest I blow the covert aspects of some good news, but it seems that, almost without anyone’s noticing, very progressive African-American candidates have been getting elected to be mayors in cities in the very deepest parts of the deep South. First, it was Chokwe Lumumba, an actual Socialist, who was elected mayor in Jackson in Mississippi Goddamn. From Oxford American:

In Lumumba’s successful campaigns for city council in 2009 and for mayor in 2013, “Free the land” had been a common refrain of his supporters. His platform, too, echoed the vision he and his fellow New Afrikans had harbored for their new society on Land Celebration Day. He pledged that his office would support the establishment of a large network of cooperatively owned businesses in Jackson, often describing Mondragon, a Spanish town where an ecosystem of cooperatives sprouted half a century ago. In debates and interviews, he promised that Jackson, under the leadership of a Lumumba administration, would flourish as the “Mondragon of the South”—the “City of the Future.”

If I may repeat, this is Jackson. The one in Mississippi. Goddamn.

Then, on Tuesday, a man named Randall Woodfin challenged and beat the incumbent mayor of Birmingham, Alabama, William Bell. Woodfin is 36, which will make him the youngest mayor of that city in over a century. More significantly, Woodfin had the active support of Bernie Sanders and the people allied with Sanders’ late campaign for president. Sanders recorded a robo-call on Woodfin’s behalf late in the race and Nina Turner, the head of Our Revolution, the Sanders-affiliated political operation, made two trips to Birmingham on Woodfin’s behalf.

(It should be noted that the Sanders folks also scored victories on Tuesday night in preliminary contests for mayor of Albuquerque and for an open seat in the California Assembly.)

If the Democratic Party weren’t so terminally bumfuzzled, and if many of its activists could get over the wounds their delicate fee-fees suffered during the 2016 presidential primaries, the party could see a great advantage in coordinating efforts between the formal party apparatus and what could be described as the progressive shock troops that carried Woodfin to victory in Birmingham.

Right now, for example, if you can believe it, the Democratic National Committee seems to be slightly baffled about what to do as regards the race for the open U.S. Senate seat in Alabama. The Democratic candidate is Douglas Jones, the former U.S. Attorney who sent to prison the last of the terrorists who bombed the 16th Street Baptist Church in 1963. The Republican candidate is a lawless theocratic nutball named Roy Moore, who lost his job as chief justice of the Alabama Supreme Court twice because of flagrant judicial misconduct.

It would seem to the casual observer that people generally should realize it to be their patriotic duty to keep Moore out of the Senate for the good of the country. However, as reported by The Daily Beast, the Democratic Party apparatus can’t even decide if it should go all in for Jones. …