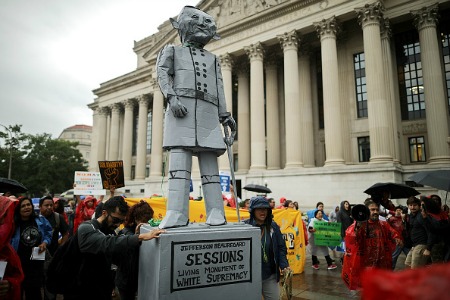 Tuesday’s news on DACA outraged on so many levels. There was the “disruptive wanton fuckery we can accurately call evil” that was the mindlessly cruel act itself, which rescinded protections for 800,000 law-abiding, hard-working American Dreamers, destroying millions of lives while costing the country an estimated $460 billion. With no rational case to be made, there was Jeff Sessions – called by his cowardly Trumpmaster to perform the dirty deed – spewing nativist lies, racist dog-whistles lurking behind each one: The guy who works for the guy who pardoned Joe Arpaio pontificated about “the rule of law” without which society becomes “afflicted by corruption, poverty and human suffering” (which sounds a lot like our society right now, just sayin’), hammered home the obscene term “illegal aliens” to ensure we got the dehumanizing message, and boldly declared the decision “the compassionate thing to do.”

All the while, and most bizarrely, he was “grinning like a troubled kid who just finished pulling the wings off butterflies,” struggling to contain his sick giddy delight at the hateful destruction. Longtime observers were unsurprised – “Racism has defined this man and his career from the very start” – but online critics were appalled by a KKK-resonant “truly deplorable excuse for a human being,” “tiny little liar,” and “fucking racist twit.” “Did anyone make a bad joke about #JeffSessions getting deported back to the North Pole?” asked one. “Because if not, I’d like to.” Another hoped that people laughed at him despite their fury, because “that really, really bothers him.”

Living, breathing symbol of the Confederacy

His announcement sparked protests at the White House, Trump Tower, ICE headquarters and around the country. On Wednesday, presumably after a busy night of effigy-building, they included an ingenious one at the Justice Department, home of Sessions’ ill-gotten power. Marching there were over 200 activists with Latinx-rights group Mijente, who’d come from as far away as Atlanta and Chicago, bearing a cardboard replica of “a living, breathing symbol of the Confederacy” – a statue of Sessions in Confederate garb, complete with frowning eyebrows, bulging eyes and pointy ears, just like his ancestor, the Keebler elf. He stood on a base reading, “Jefferson Beauregard Sessions, living monument of white supremacy.”

Marching in the rain, they chanted in English and Spanish, “Undocumented, unafraid,” “No KKK, No Racist USA” and “The people, united, will never be defeated.” In a speech, Marisa Franco, director of Mijente, proclaimed that Sessions’ and Trump’s “white supremacist agenda must be stopped.” Then, to gleeful cheers, several people attached ropes to Sessions, and pulled. The statue quickly toppled to the ground, careening into a flowerpot before landing on the west sidewalk. At impact, the head broke off. Activists wrapped the head in plastic for future protests. Or they could save it for posterity – to show our grandkids the shameful depths our country once sank to, before we found our way back.

Link to Story and 3-Minute Video

Did you hear the one about Jeff Sessions?

I’d like to tell you, but I can’t. You see, it’s illegal to laugh at the attorney general, the man who on Tuesday morning announced that the 800,000 “dreamers” — immigrants brought here illegally as children — could soon be deported. If you were to find my Sessions jest funny, I would be an accessory to mirth.

“If Justice Department prosecutors are determined to go after those who laugh at Sessions, they are going to need an awfully big dragnet. Sessions’s mannerisms, the things he says and the way he says them dare you to laugh. It’s practically entrapment!”

Police asked her to leave the hearing because of her laugh. She protested and was charged. In May, a jury of her peers found her guilty of disorderly conduct and another offense (“first-degree chuckling with intent to titter” was Stephen Colbert’s sentence at the time). The judge threw out the verdict, objecting to prosecutors’ closing argument claiming that laughter alone was enough to convict her.

But at a hearing Friday, the Justice Department said it would continue to prosecute her. A new trial is scheduled for November. Maybe Sessions, repeatedly and publicly criticized by Trump, thinks Justice’s anti-laughing crackdown will protect whatever dignity he has left. …

(Commoner Call cartoon by Mark L. Taylor, 2017. Open source and free to use with a link to www.thecommonercall.org )