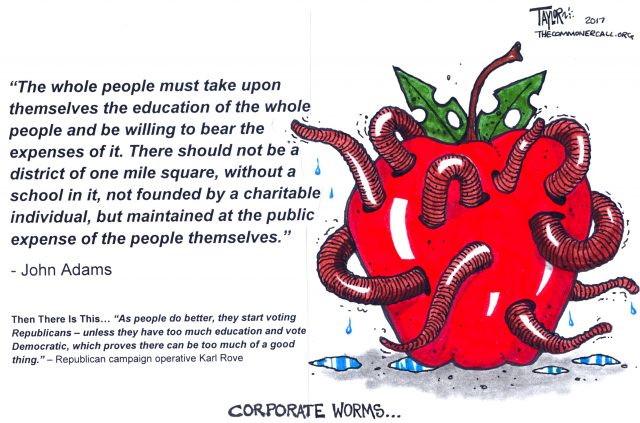 Like every year, schools open with the hope and expectation that by the end of the year, students will emerge more whole and bettered prepared for the future. There is a general sense of optimism that the dedication and hard work of educators and school employees will contribute to a healthier and more generous society.

This conviction, however, repeatedly collides with the social, economic and political realities of America. The US is not a harmonious society but one riven by a deep social and class divide. The relentless pursuit of wealth by the oligarchy, which exercises dictatorial control over the entire political system, is the greatest impediment to social progress.

The main obstacle to marshaling the necessary resources and applying them in a rational way is the domination of society by a modern-day aristocracy whose insatiable appetite is an unbearable burden.

Nowhere is this demonstrated more clearly than in the decades-long financial starvation of the public schools. Whatever sanctimonious statements the big business politicians make about their supposed commitment to children, the reality is when it comes to bailing out the Wall Street banks, funding criminal wars or paying for public education, they always come down on the side of the super-rich.

The billionaires who occupy the White House and top office of the Department of Education—Donald Trump and Betsy DeVos—are sworn enemies of public education. They intend to accelerate the decades-long campaign, pursued by Democratic and Republican administrations alike, to dismantle public education and funnel even more money into the hands of private business interests.

Trump’s budget proposal includes $1.7 trillion in cuts to social programs, including at least $9.2 billion in education cuts. The budget also includes $1.4 billion to promote “school choice” and voucher programs to siphon off funds from public schools to subsidize private and parochial institutions.

The proposal would cut the proportion of gross domestic product devoted to social spending for low-income and moderate-income families from 2.1 percent to only 1.0 percent in 2027, the lowest percentage since 1966, when the Johnson administration launched its so-called “War on Poverty.” While slashing health care, food stamps and welfare and ramping up attacks on immigrant workers, Trump’s scorched-earth budget will provide hundreds of billions for tax cuts for the rich and the Pentagon war machine.

Far from devoting the necessary resources to rebuild Houston and eastern Texas and aid the more than one million public school students devastated by Hurricane Harvey, federal, state and local authorities plan to follow the same playbook they did after Hurricane Katrina, when the crisis was used to transform New Orleans into an all-charter district.

In this political climate, the coming school year will be more like Dante’s journey with Virgil through the nine circles of hell rather than a journey of wonder and enlightenment by teachers and students. …