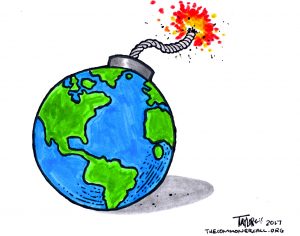 As new and worrying evidence of global warming’s destructive impacts mount around the globe, climate experts are saying efforts by the Trump administration’s EPA chief to discredit decades of climate science research should be seen as a deceitful—and dangerous—tactic.

Scott Pruitt, the Environmental Protection Agency administrator who sued the agency more than a dozen times before President Donald Trump nominated him to lead it, “has expressed interest in the idea of formally challenging the scientific consensus that human activity is warming the planet” according to reports by the Washington Post.

“What the American people deserve is a true, legitimate, peer-reviewed, objective, transparent discussion about CO2,” said Pruitt in a recent interview with Breitbart.

“Trump’s action could push the Earth over the brink, to become like Venus, with a temperature of two hundred and fifty degrees, and raining sulphuric acid.” – Stephen Hawking

Scientists argue that this discussion has already taken place.

The activism network 350.org said, “Pruitt continues to push the same playbook of delay and deceit that the fossil fuel industry has been peddling for decades…But the science is clear: we need to keep fossil fuels in the ground and transition to a 100% clean energy economy that works for all of us. It’s our only shot at a safe and livable planet. Our communities are already bearing the brunt of the fossil fuel industry’s lies — there’s no time left for debate.”

Pruitt’s proposal is just his latest statement calling into question climate scientists’ belief that humans must limit the amount of greenhouse gases they release into the atmosphere, in order to slow or reverse the affects of climate change.

In March, Pruitt said in an interview with CNBC, “There’s tremendous disagreement about the degree of impact [of human activity], so no, I would not agree that it’s a primary contributor to the global warming that we see.”

Contrary to Pruitt’s belief that there is widespread dissent about climate change, NASA finds that “multiple studies published in peer-reviewed scientific journals show that 97 percent or more of actively publishing climate scientists agree: Climate-warming trends over the past century are extremely likely due to human activities.”

Pruitt is pushing the red team-blue team idea as many scientists are ramping up their warnings about the impact of climate change on the earth.

The physicist and cosmologist Stephen Hawking said on Monday that Donald Trump’s decision to withdraw from the Paris accord, could do permanent damage to the planet.

“We are close to the tipping point where global warming becomes irreversible,” he said. “Trump’s action could push the Earth over the brink, to become like Venus, with a temperature of two hundred and fifty degrees, and raining sulphuric acid.”

Scientists also said Monday that a sheet of ice the size of Delaware could be weeks away from breaking off of Antarctica. The breaking of the Larsen C ice shelf could be a sign that Antarctica is melting faster than expected.