Dale Schultz, a Republican, served in the Wisconsin Legislature for more than 30 years, from 1983 to 2015. His Senate district is located in south Wisconsin, much of it rural farmland. Schultz was considered a moderate, and so much of what happened in state politics near the end of his tenure dismayed him: partisan fights over the rights of unions, a gubernatorial recall election, and claims of partisan Republican gerrymandering that will now be heard by the U.S. Supreme Court.

And then there was the prolonged entanglement over voting rights in the state — who could vote, when they could vote, how they could vote. In the face of years of political combat and federal court fights, the legislature ultimately adopted a vast array of changes to election laws. Among them:

Republicans hailed the moves as overdue steps toward improving the integrity of state voting. Democrats cried foul, alleging a conspiracy to suppress votes among people of color and others inclined to vote Democratic.

Schulz was in office for the birth of the efforts to tighten voting procedures and often present for the Republican deliberations about their aims. Schultz, before leaving office, voted for the initial voting measures, a decision he came to regret. He opposed some of the subsequent measures as litigation over the issues made their way through the courts and his career wound down. 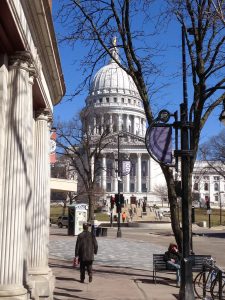 ProPublica had a rare interview with Schultz recently about the issue of voting in Wisconsin. The Q&A follows. It has been edited and condensed for length and clarity.

ProPublica: You were initially in favor of Republican efforts to tighten voting and reconfigure districts. What first appealed to you about those ideas?

Dale Schultz: Well, the blunt truth is, as a partisan politician, your knee-jerk reaction is to protect the standing of your party because that solidifies your power to accomplish what you want to do. My good friend and former colleague, Tim Cullen, also served as Senate majority leader but on the Democrat side, and we’ve said we’re both guilty of voting for redistricting maps which were politically motivated. This isn’t a one party sin. It happens on both sides, and that’s why we introduced our bipartisan bill to change how we redistrict in Wisconsin. I’m happy the U.S. Supreme Court has agreed to take up the issue this fall.

The Republicans pushing the voter ID effort cited voter fraud as a concern and a reason to tighten voting rules and requirements. Did anyone ever show you compelling evidence of that?

No, in fact, quite the opposite. Some of the most conservative people in our caucus actually took the time to involve themselves in election-watching and came back and told other caucus members that, “I’m sorry, I didn’t see it.”

In terms of voting laws, look, I don’t have a fundamental problem with having to show a photo ID in order to vote, but what I do have a problem with are the severe restrictions on what kind of photo ID is allowed and also using these laws to suppress the votes of specific groups.

You need to understand, I come from the old school of the “Institution of the Senate.” When I was coming up through the ranks, and even when I was majority leader, I put great stock and respect into the chairmanship system. When you were given a chair of a committee, you were expected to put the good of the Senate above all else. So when the chair of the Senate elections committee says there’s a problem with voter fraud in the state, and the committee passes a bill out, you take them at their word.But that’s on me.Anyway, I ultimately ordered my staff to launch our own investigation and come up with three concrete examples of voter fraud in Wisconsin. Well, guess what? They couldn’t do it, and you need to understand the time, I had graduates from the University of Wisconsin journalism school on staff who’d worked for national publications. But we did come up with two examples. One was a Republican legislative staffer who’d voted in the Madison area as well as back in her hometown in the same election. The other was the estranged wife of a Republican. That’s it, and both examples were on the Republican side.Did you ever raise the lack of evidence with your Republican colleagues?

Our caucuses were quite raucous. Our meetings and how we dealt with one another was blunt.

I asked my colleagues to show me three specific examples, and all I got was a bunch of hand-wringing and drama-filled speeches about the “buses of Democrats being brought up from Chicago.” I said, “Show me where that was ever prosecuted or even charges brought.” It was crickets. Nobody could give me an answer, and that was both an eye-opening and sad moment for me because I think it finally hit me that time-honored tradition of the “Institution of the Senate” was all but dead.

You know, I had, I think it’s fair to say, a reputation for challenging the thinking of our caucuses. But if you find yourself in a situation where you’re dissenting too often, pretty soon people go, “Well, he never agrees with us, he’s not really one of us. We’re not going to bother to listen.” So, you learn to pick your spots and try to make a difference where you can.

I want to be clear. I don’t want to cast myself as some sort of superhero. Look, I’m a politician. I was for 30 years. Inherently, that means that you compromise and that everybody’s hands get a little dirty as they try to work out a solution that is the best for people.

People were very frank and this is not a game for the timid. People were very emotional, but you know when it comes to casting votes, people know that once the decision is made, the team pretty much sticks together.

Talk about why you later came to regret ever voting for the measures.

I voted for the first voter law bill, and then I did what I’d done since I first got elected in 1982; I went out and did my regular scheduled district office hours. It took all of my first stop to realize I didn’t do my homework. I had town and village clerks coming up to me saying, “Dale, are you nuts? Do you realize how restricting voting hours and early voting and absentee voting is going to affect how people can vote let alone making our jobs all the harder?” They also made it clear that there was no voter fraud happening that they were aware of. Because of the feedback from my constituents, I voted no on the subsequent bills.

I enjoyed all the people I represented and it was a great honor. But there were occasions where people said, “Dale, I’ve heard your explanation on what you’ve done and why you’ve done it, but I think you got this wrong.” And I think voter ID was one of those.

A long time ago my father told me on the farm, if you happen to, when you’re out in the pasture, put your foot in a cowpie, don’t sit there and explain why you stepped in it, just take it out. And it’s been my experience politically, that when you do that, and you explain the reasons, people tend to see that as a politician evolving and thinking and listening, and I think most people are hungry for that. And they’re supportive of that, as long as it doesn’t become a daily flip-flop.

The numbers are in from the 2016 election in Wisconsin. The state surprised the pollsters by going for Trump. And now there’s likely to be a long debate and examination of whether the voter ID and other measures played a role in that outcome. Any early thoughts?

Oh, yeah, all of these things have an impact. Even just constantly keeping up a steady drumbeat of claims about election fraud has an impact. It motivates a base. How big an impact probably varies from state to state. In very close elections, even seemingly small impacts can have great consequences.

You got out of elective office after 32 years. Why?

Well, because I like to think I’m old enough and wise enough to know that there’s more to life than politics, as important as it’s been to me and as enjoyable as it has been to me for all those years. Then again, it’s not that I haven’t been bothered by the changes I’d seen around me or just the simple reality that it was less fun than it used to be as people stopped thinking and became more Pavlovian.

Related stories: Dale Schultz was prominently featured in a ProPublica article in 2014 about legislation on mining in Wisconsin.