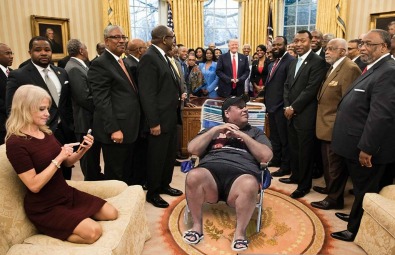 Talk about your profanely perfect metaphor: This hot and sunny weekend, big-time New Jersey cretin and governor Chris Christie closed down the state’s parks and beaches due to a budget stalemate. Then he hopped into his State Police helicopter and took his entire family to the 10-mile, now blissfully pristine Island Beach State Park, which thanks to the closing they had to themselves. All day, meanwhile, police posted at the park’s gates turned away the hot and frustrated peasants who pay Christie’s salary as a, lest we forget, so-called public servant. Later, the family and their friends hunkered down in the palatial residence provided there by – yes! – also us.

Asked about it at a press conference later in the day, Christie – who boasts a 15% approval rating, or the lowest of any governor in the country – first lied that he hadn’t gotten any sun that day. When confronted by photos from an enterprising photojournalist, his spokesman conceded “the governor was on the beach briefly” but “he had a baseball hat on.” Because one middle finger to his public wasn’t enough, Christie added another when asked if this was fair: “That’s just the way it goes,” he said. “Run for governor and you can have a residence there.”  Welcome to the class war, where Christie and the big orange creep and their entitled ilk have no more fucks to give as long as they can get away with it. Soon, let them eat sand.

The Word For Our Time…

Kakistocracy: (/kækɪsˈtɑkɹəsi/) is a state or country run by the worst, least qualified, or most unscrupulous citizens.[1][2] The word was coined as early as 1600s.[3] It was also used by English author Thomas Love Peacock in 1829.

The word comes from the Greek words kakistos (κάκιστος; worst) and kratos (κράτος; rule), with a literal meaning of government by the worst people.