While Trump touts his armada heading to the Korean peninsula and Brian Williams reverentially described the majesty of cruise missiles the Russian collaboration story continues to bear fruit even if not from Page 1.

Remember former Trump campaign manager Paul Manafort, “…played a very limited role for a very limited amount of time” according to White House spokesperson Sean Spicer. In another damning statement, here’s what Spicer had to say about Roger Stone and Carter Page, “There was a discussion, I heard some names [thrown] around before, that were hangers-on around the campaign,” Spicer said. “At some point, people that got thrown around at the beginning of this hearing, some of those names, the greatest amount of interaction that they’ve had is have cease-and-desist letters sent to them.” Even Mike Flynn, who also didn’t hang around very long, was only a “volunteer”. So even though Trump touted Page as second on his list of foreign intelligence adviser candidates, he was just a “hanger-on”.

So many come and go so fast and contribute so little. But take a look at this news item and the graphic mid-page, the one thing they all have in common – Trump, Flynn, Page, Sessions, Kushner – they are all linked to Sergey Ivanovich Kilyak, Russian Ambassador to the United States. We might as well just call him Sergey since we’re seeing him so often and getting to know him so well. The Washington Post provides the background: FBI obtained FISA warrant to monitor Trump adviser Carter Page

So when Spicer downgrades your role, it’s a sure sign you’re going to be in the news and you’re in a world of trouble. In this case the FBI used a FISA warrant to monitor Carter Page’s contact with Russians. Flynn had ties to Russians, Kushner had “dozens” of meetings with Russians, Sessions had at least three meetings with Russians, Manafort was paid for work done for Russians, as was Flynn – and none of this was disclosed.

This Is The Kind of Thing That Doesn’t Leak

Here was a bigly development for the week: We learned a FISA warrant was issued to monitor Page: Carter Page Feels Like a Warning Shot: Someone Leaked This News With A Very Specific Aim.

We have both the news about the FISA warrant to monitor Carter Page and his contact with Russians. And we have the importance of the leak leading to the Washington Post article. Both are very significant.

The Young Turks asked an important question about the colorful adventures of mercenary prince Erik Prince asking Is This The Secret Russian Deal Trump Made?

I mentioned Prince’s meeting in the Seychelles, which Prince confirms, but what’s eye-popping is how he tries to make it appear so casual. After multiple meetings in New York, he agrees to fly to the Indian Ocean on short notice, and previously undisclosed, for something he dismisses as unimportant. Russians, Emiratis (UAE, United Arab Emirates), and Prince with his ties to the Trump campaign, ties to Bannon, ties to Rebekah Mercer – all the puppeteers, has contracts with the UAE to set up paramilitary units but somehow this was an unimportant casual meeting. What deal were they making? Prince as a Trump representative meeting with the Russians and the Emiratis.

Additionally, at the 6:30-minute mark, there is an update on the Trump server in Pennsylvania linked to an Alfa Bank (Russian Bank) server. Virtually all communication (90%) is between Trump’s server, a Russian Bank, AND Spectrum – a medical facility chain owned by Dick DeVos (husband of Betsy DeVos, brother-in-law to Erik Prince). When this first came up this summer it was considered in the media but set aside with lame commentary about how this was somehow simply Spam, two computers randomly talking to each other. So Trump, a Russian Bank, the DeVos’s have three servers communicating almost exclusively between the three – and it’s a coincidental occurrence of Spam. Again, more news to follow…

In the meantime, Erik Prince is doing fine. He’s selling logistics services to China for their $900 billion Silk Road initiative (pan-Asian trade infrastructure). Not serving Chinese foreign policy and not providing military services. Yet trade is Chinese foreign policy and Prince touts his security management and acknowledges plans for two “forward operating bases”. Not to worry, for as the Godfather used to say, “Nothing personal; just business”.

By the way, another coincidence, Prince’s new company is headquartered in Abu Dhabi, in the United Arab Emirates.

I’ve been trying to offer perspective on what an oligarch looks like, this is what a real mercenary looks like: Blackwater Founder Erik Prince Eyes Opportunities With China (pay fire wall sadly).

Another Form of Push Back

Now that Trump and Putin are publicly arguing we’ll be hearing about how there was never a bromance; couldn’t possibly have been collusion. It will get noisy, maybe even give Susan Rice a respite – but we know better – it’s too late and the more you push this defense the more suspect the 59 Tomahawk missiles become – more and more like wag-the-dog. But Trump and Spicer would rather argue about the runways that were left intact than Kushner’s pending meeting with the Senate Intelligence Committee. So we’ll hear much debate about how Russia is not our ally after all. 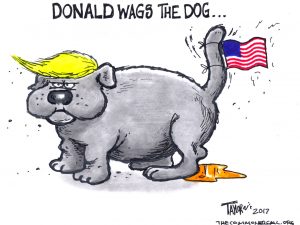