I think we can all agree this was an unusual week. In case you missed it, here’s a good summary by Alec Baldwin as Donald Trump on Saturday Night Live:

“I just had an amazing week, folks… Gorsuch was confirmed, the media is saying nice things, and no one is talking about Russia. Wow, what a difference those 50 Tomahawk missiles can make.”

The video does not disappoint, link HERE.

Notice Baldwin/Trump has nothing to say about the summit with Chinese President Xi Jinping – nothing of substance was agreed to with Xi, who waited ’til he was out of town before criticizing the US bombing in Syria. Poor guy was probably left to wait at the dinner table while Trump excused himself to launch the missiles.

BUT – best to keep focus as Dan Rather suggests, here The Dangers of Distraction

If There is No There There Why So Many Lies and Failures to Disclose?

Jared Kushner is Trump’s son-in-law, senior adviser, a Democrat according to Bannon, responsible for reinventing government, responsible for negotiating peace in the Middle East and recently returned from a quick visit to Iraq. He is also scheduled to testify before the Senate Intelligence Committee. I’ve read a number of articles that help us understand the line of questioning he’ll face – his failure to disclose meetings with Russians including his omission for his Top Secret clearance application. As the New York Times reported, Kushner Omitted Meeting With Russians on Security Clearance Forms. 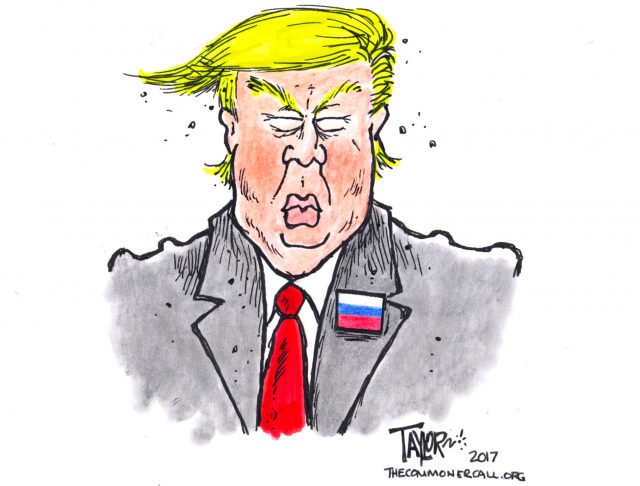 While most of the attention is given to statements like this, “They (the meetings) include a December meeting with the Russian ambassador, Sergey I. Kislyak, and one with the head of a Russian state-owned bank, Vnesheconombank, arranged at Mr. Kislyak’s behest.” You can usually find a quieter reference to, “(But) Mr. Kushner did not mention dozens of contacts with foreign leaders or officials in recent months.” [Emphasis added. – Ed.]

Dozens of meetings with Russians including the Russian Ambassador, and at his request, a follow-up meeting with a sanctioned Russian Bank whose representative for the meeting is a known graduate of Russian spy school. BUT – these were two of “dozens of meetings”, none of which were disclosed.

I have read two explanations put forward – 1) he forgot and 2) the application was filed prematurely before all information had been noted. Certainly Kushner will pick one and earnestly stick to it for perpetuity.

At the risk of violating Dan Rather’s coaching, let’s broaden our view a bit…

Trump’s collusion with Russia is consistent with his business conduct. We’ve all seen videos of one or the other Trump child bragging about how much business they’ve done with Russians and many other unsavory characters. Trump regularly regales us with how legal restrictions on bribery and corruption make US companies less competitive in global markets.

Transparency International is a not-for-profit organization committed to researching, highlighting and educating on corruption and the cost of corruption globally. Here’s the TI ranked listing of least corrupt to most corrupt countries to do business, Corruption Perceptions Index 2016.

Denmark and New Zealand are the least corrupt places to do business, the US is ranked 18th, Azerbaijan is 123rd, Russia is 131st. (Somalia is last at 176th). So, why do I mention Azerbaijan?

As I said, the Trump team seems to flaunt their disregard for law or fairness; profit is the only motive. So while it now suits Trump to paint Iran as part of his axis-of-evil, he wasn’t shy about doing business in Azerbaijan with people with known links to the Iranian Republican Guard, the elite Iranian military unit and holders of much wealth and investments around the world. Such a relationship is against many US laws and would have easily been identified and avoided with the simplest of (required) due diligence (Google the names yourself). But this is Trump and team – due diligence is for Losers (as supported by 3,000 lawsuits over the years), profit is for winners. The New Yorker recount Donald Trump’s Worst Deal.

This is important because this is how Trump does business and this is the baggage and business code that he’s brought with him to the White House. More to the point, it was part of HOW he got to the White House. Remember the detailed article on Trump relations with Russian mafia, well here’s more detail focused on Felix Sater and once again, (alleged) Russian organized crime boss Semion Mogilevich. You can learn More About Felix Sater – The Problematical Friend Trump Forgot.

It is highly unlikely this will quietly go away. We also learned this week there were investigations by the CIA in addition to the FBI and both investigations started as early as last summer. As the New York Times reported late last week C.I.A. Had Evidence of Russian Effort to Help Trump Earlier Than Believed.

So we’ll end where we started with a reminder that humor is a great weapon against Trump. The Onion reported Trump Confident U.S. Military Strike On Syria Wiped Out Russian Scandal.

Or how about this great cartoon by Miami Herald editorial cartoonist Jim Morin about Donald’s real missile target, HERE.