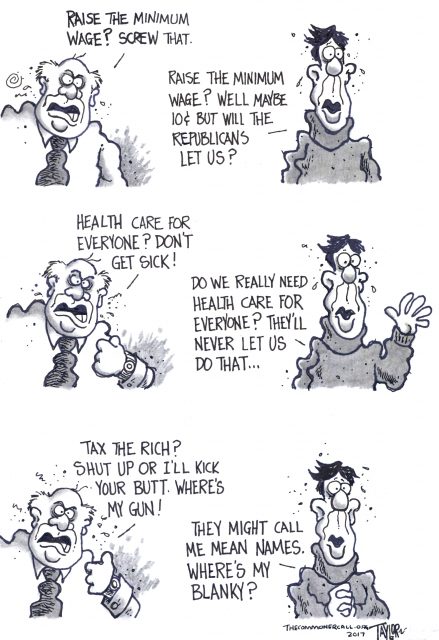 Before I get going, this is not a case for a third party. I still believe we have a system that is rigged for the two largest parties and other efforts are a waste of time and energy. I believe the route to power in America is through either the Democratic or the Republican party.

I believe that most rank and file Democrats do have progressive values and think the party is liberal. Many, however, are influenced by a belief that we have to water down the message to win elections. While they believe in single payer healthcare, they don’t think the American people will vote for candidates advocating that, so they don’t fight for it.

They believe in a living wage, but they don’t think it is achievable, so they fight for smaller raises in the minimum wage. The believe higher education should be free, but they are scared to fight for it. On issue after issue, many Democrats are afraid to fight for what they believe.

Progressives are making progress. Have we transformed the Democratic Party? The answer is not yet. We have a long way to go. Many Democrats are still influenced by Wall Street and other corporate interests. Too many progressives are still only fighting an outside strategy. They are ignoring the inside game and conceding control of the party to those who are afraid to fight for what they really believe.

Too many progressives have given up on the Democratic Party. Their skepticism is understandable but unwise. Conceding the Democratic Party to those acceptable to corporate interests has led to the Republican control of our government. Too many Democrats think moderation is the answer and fear that going too far to the left is not the answer. They still don’t get it. Voters want to vote for something, not against something. They are tired of voting for the compromise candidate.

While moderation is a logical argument, it isn’t working. The Tea Party took out many moderate Republicans by fighting for what they really believe. The Tea Party didn’t moderate their message, and they helped the Republicans take control of all three branches of government. What they did was motivate the Republican base. The “third way” Democrats were diluting the Democratic Party message while the Freedom Caucus was moving the Republican Party to the right.

The pundits and all the experts expected the Republican Party would overreach and voters would punish them at the ballot box. It made sense; the GOP was moving too far to the right. Voters at some point had to punish them. That was the smart strategy, wasn’t it?

What the Democratic Party ignored was its shrinking base. The move to the center was accompanied by an exodus on its left. Some became involved in the formation of the Green Party and even more just became independent and gave up on electoral politics entirely. The result was Republican gains in places like Wisconsin, Michigan, Ohio, and Pennsylvania. Even Illinois elected a Republican governor, and during the last few decades of redistricting the Republicans drew the maps in state after state.

The Tea Party Republicans understood that if they fought for what they believed and organized for it, they could motivate their base and win elections. Democrats thought they needed to moderate their message to attract independents and moderate voters. Rahm Emanuel and his ilk were out there recruiting centrist candidates to try to take back Congress. More people were voting Democrat in election after election, but the Republican Party was increasing its majority in the House and taking over more state governments.

Then along came an independent candidate from Vermont who was singing their tune. They responded and nearly made him the nominee of the Democratic Party. He scared those in the party who thought the country would not vote for someone so “radical.” They ignored signs like the success of the Fight for 15 movement. They thought they had to run a more centrist candidate.

They were correct that the only success they have had recently was with a centrist candidate. Barack Obama was an exceptional candidate. He motivated the base because he had a gift. He could make everyone think he was speaking to them. He was able to overcome the weaknesses created by the direction the party was taking. Progressives turned out to elect the first African American president. They were later disappointed by the way he governed, but they did turn out and vote for him.

Even with Obama at the top of the ticket, the party lost ground. Trump winning in Michigan, Ohio, Wisconsin, and Pennsylvania should be a wake-up call, but for many, it is not. They point to the popular vote and blame the Russians for Trump’s victory. Or they blame the Bernie supporters who either voted for the Green Party candidate or stayed home. They blame racism and sexism. All of these excuses did play a part. But there was another major reason that was more responsible. What they still don’t get is that they didn’t represent their base and give them a reason to turn out. Instead, they depended on voters rejecting Donald Trump, and they failed to excite their base.

Check Out The Commoner Call “Lines of Resistance” Political Cartoon Archive.
All work is orignal and free for use with atribution to www.thecommonercall.org 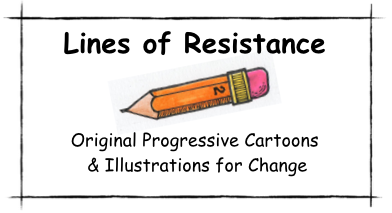