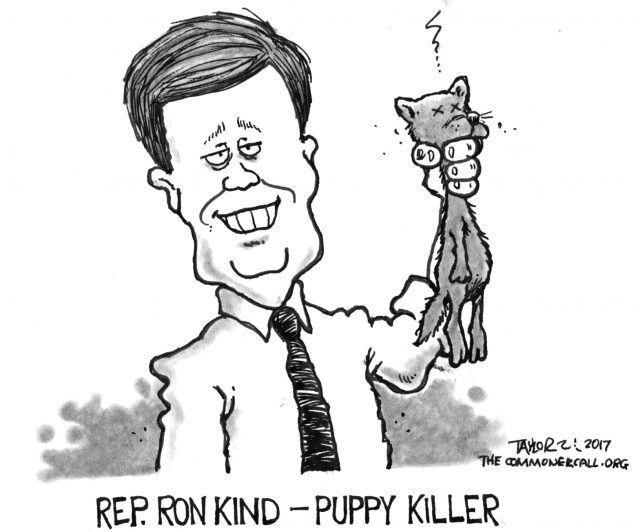 Wisconsin progressives are use to nominally democratic Rep. Ron Kind aligning himself with the most venal and corrupt Wall Street interests. His participation in Wall Street funded groups like the Third Way puts him in the role of butler and pool boy to the powerful. Despite this, the congress critter manages to keep a wholesome, sunny reputation in Wisconsin’s Third Congressional District, with most voters having no idea Ron is aligned with corporate interests that would like to take a chainsaw to well earned benefits programs like Social Security and Medicare.

But early Sunday morning an alert Commoner Call reader sent along the news story posted below showing Ron was one of only five “democratic” reps to join the Republican majority in voting to permit the killing of wolf pups and bear cubs in their dens.

Yikes! Going after grandma is bad enough but now defenseless little baby animals in their dens?

The congress critter apparently felt some level of shame – or sneakiness – by not posting the February 16 vote on his website.

In a bid for the NRA vote, Ron regularly markets himself in campaign ads as the sportsman’s camo-clad friend but no true hunter would support the morally empty practice of “denning” defenseless young game. Did the steel-jaw leg trap industry make a campaign contribution? Perhaps it was some ammo company. There’s a lot Third CD voters don’t know about the real “Wall Street” Ron. My, what hides behind that smile, Ron.

A phone message left for Mr. Kind’s press person Sunday morning (4/2/17) was not returned by publication time. A portion of the press person’s voicemail recording of an email address was unintelligible. If the congressman would like to send a statement explaining the rationale behind his vote The Commoner Call will run it, as is, without editorial comment.

What the U.S. House of Representatives did today [2/16] – actually a very narrow majority of the House – was shameful. Cruel. Callous. Venal.

The vote in favor of H.J. Resolution 69, authored by Alaska’s Rep. Don Young, was 225 to 193. Those 225 members voted to overturn a federal rule – years in the works, and crafted by professional wildlife managers at the U.S. Fish and Wildlife Service – to stop some of the most appalling practices ever imagined in the contemporary era of wildlife management. Denning of wolf pups, killing hibernating bears, spotting grizzly bears from aircraft and then shooting them after landing, and trapping grizzly bears and black bears with steel-jawed leghold traps and snares. The stuff of wildlife snuff films.

There were five Democrats who voted with the Republican majority – Reps. Henry Cuellar, Vicente Gonzalez and Filemon Vela of Texas, Ron Kind of Wisconsin, and Collin Peterson of Minnesota — even as a parade of Democratic lawmakers called out the cruelty and said the behavior in question was unconscionable and unthinkable.

Republican lawmakers did this for the NRA, the Safari Club, and some hunting guides and outfitters. There were 10 Republicans who voted against the majority position – Reps. Dan Donovan and Peter King of New York, Frank LoBiondo, Tom MacArthur, and Chris Smith of New Jersey, Martha McSally of Arizona, Dave Reichert of Washington, Ileana Ros-Lehtinen of Florida, Brian Fitzpatrick of Pennsylvania, and Fred Upton of Michigan. We thank them for their compassion and courage. There were five Democrats who voted with the Republican majority – Reps. Henry Cuellar, Vicente Gonzalez and Filemon Vela of Texas, Ron Kind of Wisconsin, and Collin Peterson of Minnesota — even as a parade of Democratic lawmakers called out the cruelty and said the behavior in question was unconscionable and unthinkable.

Some members favoring the Young resolution cloaked their vote behind the mantle of states’ rights. But the states don’t have a right to dictate what happens on our national wildlife refuges. What’s the point of having a national wildlife refuge if the federal professional wildlife staff there automatically default to the management authority of the state? Congresswoman Niki Tsongas of Massachusetts, whose late husband, Sen. Paul Tsongas, helped write the Alaska National Interests Land Conservation Act (to create a good share of these refuges), specifically stated that Congress never intended to cede complete wildlife management authority to the states. In this case, Alaska has a bloodthirsty Board of Game, whose members enthusiastically implement a draconian policy called “Intensive Management.” That policy dictates that state managers drive down wolf, bear, and coyote numbers to boost caribou and moose numbers for hunters — turning Alaska’s wildlife refuges into what retired Arctic National Wildlife biologist Fran Mauer calls “game farms” — the very thing the U.S. Fish and Wildlife Service acted to stop through a rigorous, science-based, and legal federal rulemaking process that was overturned by today’s vote.

The U.S. Fish and Wildlife Service shouldn’t run refuges like game farms, as Alaskan officials want to do. If Congressman Young – who conceded on the House floor today that he personally killed wolves in their dens for federal pay years ago – thinks he can prevail in court, then he can have at it. But don’t come to the floor with a half-baked , ahistorical theory that is very unlikely to withstand scrutiny in our federal courts.

In addition to making a phony states’ rights argument, Young and his allies argued that denning and land-and-shoot hunting don’t occur. If that’s true, why were they concerned about the U.S. Fish and Wildlife Service rule? If it was only cosmetic, do they want to take up the finite time the U.S. Congress has to try to make rhetorical points?

These practices do occur, especially trapping of bears and land-and-shoot killing. Alaska has permitted slaughtering wolves and bears by inhumane means for more than two decades, since the end of the term of humane-minded Gov. Tony Knowles, who won two terms in the state even as an outspoken advocate for ending aerial gunning, land-and-shoot hunting, and other despicable practices. In the post-Knowles era, politicians there have called for wiping out entire packs of wolves around Denali National Park and now the Alaska Board of Game is working to cleanse the Kenai Peninsula of wolves too.

I offer my sincerest thanks to so many lawmakers who stood up to this cruelty – practices that are to wildlife management what cockfighting and dogfighting are to the management of domesticated animals.

Only the U.S. Senate and President Trump can now stop this unwinding of a decision by a professional wildlife management agency. Please contact your U.S. Senators and tell them to steer clear of a disgraceful resolution, and to honor limits in the conduct of wildlife policy in the United States of America.