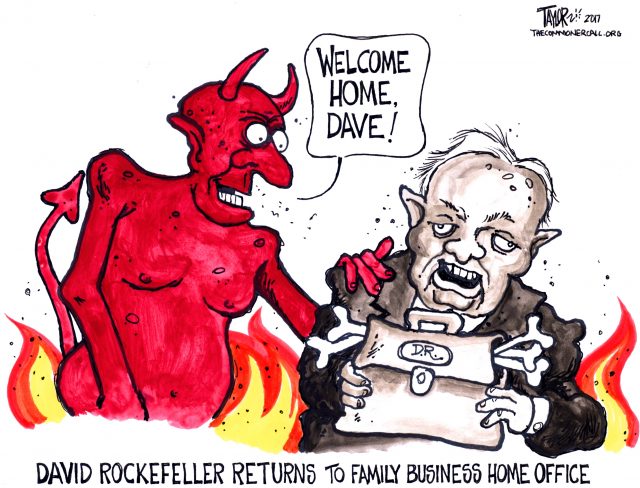 As a child growing up in a mansion on 54th Street in Manhattan, David Rockefeller remembered roller-skating with his siblings down Fifth Avenue trailed by a limousine in case they got tired. Rockefeller and his family, which included billionaires and politicians at all levels of government, spent a lifetime ensconced in this kind of luxury. At the time of his death on March 20, Forbes estimated that the 101-year-old Rockefeller’s investments in real estate, share of family trusts, and other holdings stood at $3.3 billion.

The obituaries and tributes waxed nostalgic, giving us all the gilt with none of the grit. Instead of a reckoning with what this man, alongside his powerful family, wrought over a 101-year life, the eulogies have been hollow celebrations and stories of celebrity-filled parties.

Not to be confined to the obituaries, JP Morgan Chase & Co. took out a full-page advertisement in the business section of the New York Times. With a half scowl, a black-and-white photograph of David Rockefeller looms in the center of the page, while a message from Jamie Dimon, the chairman and CEO of JP Morgan, attempted the poetic.

Dimon writes that Rockefeller left “an indelible, positive mark on our world as a leader in philanthropy, the arts, business and global affairs.” A former member of the Board of Directors of the Federal Reserve Bank of New York, Dimon sat in that seat during the economic collapse of 2008 and was widely criticized for his role in the financial crisis that devastated millions. He also occupied the main seat at JP Morgan Chase, the same one Rockefeller held as chairman of Chase Manhattan from 1969 –1981, during the depths of New York City’s fiscal crisis, decades before Chase acquired JP Morgan.

Sometimes the idea of a “ruling class” can seem abstract. In the figure of David Rockefeller, who died March 20, and the Rockefeller family, the abstraction melts away. His life and his family’s history give us a unique view into how those with the money shape everything from who gets elected to public office, to how cities are built, to what kind of art is allowed to be produced.

Over a 101-year life, David Rockefeller used political influence and repression to shore up his family’s power.

David learned his capitalism at his daddy’s knee and from his grandfather’s university. He was a PhD student in economics at the University of Chicago, which was founded in part with his grandfather’s money. The school, according to David, “boasted one of the premier economics faculties in the world.”

He denies his legacy status as important, saying “the fact that Grandfather had helped found the university played a distinctly secondary role in my choice.” He has sat on the board of trustees in various capacities for seventy years, and the university created the David Rockefeller Distinguished Professorship in his name.

David Rockefeller’s connection to the economics department would have longstanding implications for those in other parts of the world with a bit less privilege. …