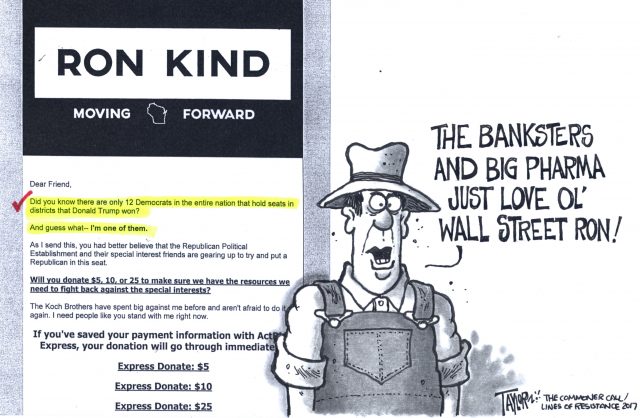 (The Commoner Call & Lines of Resistance cartoon by Mark L. Taylor, 2017. Open source and free to use with link to www.thecommonercall.org )

The underlying assumption, I’m guessing, of the congress critter’s appeal is that he is such a stellar democrat not even the Trump wave could take him out. Of course the GOP did not even field a candidate in 2016. Nevertheless, folks are urged to pony up some bucks if they want to keep their wonderful congressman in place. Who else, one is supposed to wonder, can shield Wisconsin’s struggling Third Congressional District from the pussy-grabbing paws of Trump’s republicans better than Ron.

Knowing what I know about Ron, my reaction was:

“Why the hell would the GOP waste perfectly good money they could spray somewhere else when Ron Kind is a reliable rubber stamp for the corporate raiders, Wall Street buccaneers, insurance deer ticks, Big Pharma leeches and the whole corporate street gang that is steadily siphoning off the wages, savings, and future of the middle class? What the hell is a Republican not to like?”

You have to understand a basic truth about Ron Kind; when you see Ron jogging down the sidelines of the Westby July 4th parade smooching babies, high-fiving 5 year-olds and grinning from ear-to-ear he presents a well-scrubbed and likable Wisconsin hometown-boy-done-good image. Back in Washington it is whole other story.

Unknown to most of his trusting constituents there is a shape-shifting Ron – Wall Street Ron – that is anything but supportive of the middle and working class families of the Third CD.

Ron has long been an honorary co-chair of the Third Way, a slickly-packaged Washington, DC based “think” tank funded largely by Wall Street financiers specializing in bargaining away our common wealth and the security of citizens for the convenience and greed of the corporate class. Third Way was founded to blunt and smother progressive economic reform that might threaten even a nickel of ill-gotten theft by the financial class. Most Third CD dems first learned about the bankster front group and their congress critter’s connection to the Third Way con after a sleazy 2013 Third Way hit piece on Sen. Elizabeth Warren titled “Economic Populism is a Dead End of Democrats” popped up on the op-ed page of the Rupert Murdoch owned Wall Street Journal. The factually challenged opinion piece lambasted Warren for even suggesting higher Social Security benefits for struggling seniors could be financed by higher taxes on the wealthy.

Shortly after that I bumped into Ron during a tasty tunafish casserole lunch at the Third Congressional District Democratic convention. I asked him about the WSJ hit piece and why a supposed progressive defender of middle class families would be an honorary co-chair of such a gang. Ron quickly said he too was shocked – shocked! – at the op-ed and assured me he had nothing, nothing, nothing to do with it and, besides, he had already resigned from the Third Way honorary co-chair position. Poor betrayed man was clearly disturbed by what had happened. He shook his head, sighed and clasped his hands together and gave me a heartfelt “I can’t believe they did that” look.

“Thank you,” he replied through gritted perfectly aligned teeth.

Three years later his photo – young enough to look like it came from his high school class president campaign poster – is still on the Third Way website. If you look up the word “cynical” in Websters you will find the same photo.

As if that weren’t enough..

Ron is also a big shot in the New Democrat Coalition (NDC). In fact he was one of the founding members and the group’s first chairman. He recently was given the title of “chairman emeritus”. Wowser!

The New Democrat Coalition is just another version of Wall Street funded Third Way betrayal. In fact, back in 2010 the public interest research group ProPublica referred to Kind’s NDC as “The Coalition Pharma and Wall Street Love”. In reporting on a cushy, high-priced weekend retreat on Maryland’s eastern shore with democratic congress critters and U.S. Chamber of Commerce, JPMorgan, Goldman Sachs and assorted other corporate lobbyists and gear greasers from Big Pharma and insurance companies our very own Ron Kind addressed the Wall Street herd promising: “We’re working hard with you to get the policy right.”

ProPublica did not report if any families from Westby were attending the fancy dinner to make sure the congressman was “working hard to get the policy right” for them too. But then it’s pretty hard for folks working third shift or milking early in the morning to make those fancy DC soirees.

In a bit of poetic symbolism, at the time of the ProPublica profile the New Democrat Coaliton was made up of  69 democratic members of congress.

Of course, advocating for progressive policy and true financial reform that would make it easier for Wisconsin families to build and maintain a meaningful life of equal opportunity for their children, have access to health care, reasonably priced medications and assure some measure of security for their grandparents is too much like Tea Party extremism to Wall Street Ron. Leading groups like Third Way and NDC going after Social Security and making things easier for banksters and Big Pharma are all in a day’s work for the Third CD’s supposed representative.

So am I surprised Wall Street Ron managed to bob to the surface of the Trump tsunami? Not at all. He’s a perfect perfect bit of corporate Blue Dog Dem flotsam for the age of Trump.

Don’t worry about Ron’s campaign fund. As in past years you can rest assured it will be well-padded by the usual band of corporate hacks, thieves, con artists and sociopaths.