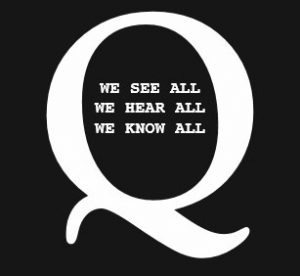 The wild extreme fantasy is going global and could well affect the direction of the nation.

This week President Donald Trump retweeted a false claim posted by a follower of the ‘QAnon’ conspiracy theory, stating that the real Covid-19 death toll is just 6 percent of official figures. Twitter took down the tweet saying it breached their terms and conditions. It’s not the first time the president has promoted messages from supporters of the debunked conspiracy theory that claims — in part -= that Mr Trump is leading a top-secret campaign to dismantle a global network of Satan worshipping cannibal paedophiles led by billionaires, celebrities and Democrats.

Acts of violence have already been attributed to those backing the outlandish conspiracy theory and the FBI now considers the movement a domestic terrorism threat. While support for ‘Q’ — said to be an anonymous security official with inside knowledge — has been growing in the United States, followers are increasingly showing up in Europe and Latin America. So why has it spread to other countries and what are the QAnon links to foreign groups? Could supporters disrupt politics outside of the US? And is QAnon a harmless online fantasy or a dangerous threat to truth, democracy and public safety around the world? Ritula Shah is joined by a panel of experts.