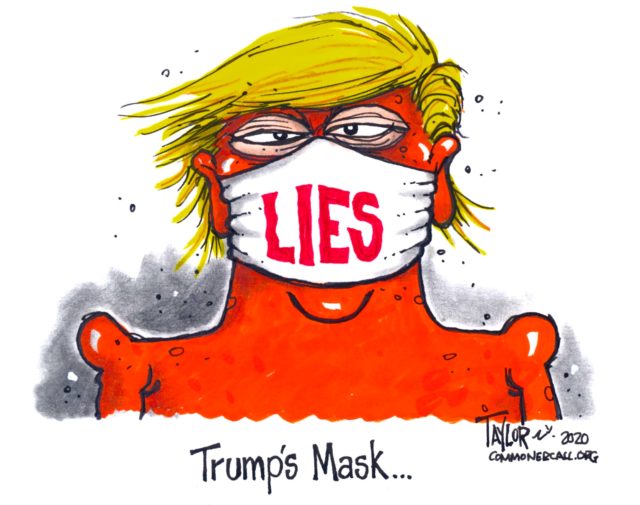 “picture of the world that bears no resemblance to reality”

President Donald Trump formally accepted the Republican Party’s nomination on Thursday before a crowd of about 1,500 on the South Lawn of the White House. In defiance of social distancing guidelines, attendees sat shoulder-to-shoulder with few people wearing masks. Trump spoke as the U.S. death toll from the coronavirus neared 180,000 — by far the highest total in the world — and repeatedly defended his administration’s handling of the pandemic.

Trump warned of chaos and violence if Joe Biden becomes president, but made no reference to the police shooting of Jacob Blake in Kenosha, Wisconsin, or the killing of two protesters in Kenosha by a 17-year-old Trump supporter. We speak with historian Rick Perlstein, who says Trump paints a “picture of the world that bears no resemblance to reality” and that he has driven people to act violently.

“Adolf Hitler’s chief propagandist, Joseph Goebbels, used to say it’s easier to get the public to believe a big lie than a small one. And what he meant was, if you create such an all-encompassing completely dominating picture of the world that bears no resemblance to reality, people might think that it’s inconceivable that that could be false, right?”

Donald Trump continually breaks multiple laws. Yet the serial lawbreaking, lying Trump is playing the “law and order” card against street protestors reacting to fatal cases of police brutality. Armed pro-Trump provocateurs are attending civic protests and generating casualties and property damage, as was the case recently in Kenosha, Wisconsin. Trump uses such mayhem to attack Joe Biden and his hyped “radical leftists.” This is grotesque, but then that is how corrupt, dangerous, devious Donald operates when cornered by falling polls, and growing opposition from leading retired military leaders and national intelligence officials. Trump’s attack on the U.S. Postal Service is also producing a nationwide backlash and even red-state conservatives are troubled by delays in deliveries of medicine and Social Security checks.

Devious Donald has a practice of doing exactly what he mostly falsely accuses his opponents of doing. It is puzzling, though not surprising, that the Democrats have not repeatedly restated the highlights from corrupt Donald’s rap sheet. Shining a spotlight on Trump, with specific indictments, would demonstrate that his actions suspend law and order in favor of dictates.

The daily tweeting, lying King, the man who boasted about abusing women, and behaving as a sexual predator, is a ruler who brings out the worst from this country. Trump deliberately divides America and stokes conflict and disruption.

Every day Trump is committing crimes and civil violations of federal law. Every day Trump is violating the Constitution with serious impeachable offenses (December 18, 2019, Congressional Record H-12197). Do the Democrats think that the American people do not care about the rule of law and observing the Constitution that are the bulwarks against destructive dictatorial power by an ego-obsessed delusional wannabe monarch?

Yesterday’s acceptance speech to the Republican Party by Trump turned the White House into a federal crime scene. The Hatch Act states that having federal employees enable, with federal property, the political campaigns of the President is a criminal violation with serious jail time. Why? Because Congress did not want the power of the federal government to be used to further an incumbent’s political objectives against challengers. When Trump ordered Treasury Department staff to place his signature on the memo line of millions of relief checks, that was also a criminal violation of the Hatch Act. Attorney General William Barr, a Trump toady, is not about to prosecute. Barr refuses to respond to demands that he investigate this and other Trump administration violations of law.

But lawless Donald has gotten away with more serious violations such as seizing, unconstitutionally and illegally, the Congressional power of the purse and the power to tax in our Constitution. Trump moves money for purposes, not approved by Congress, from one agency to another, as for building the wall, thereby violating the Anti-Deficiency Act, which carries a criminal penalty.

Trump has defied over 100 Congressional subpoenas and more formal demands for his subordinates to testify. These are first-class impeachable offenses. The Founding Fathers provided Congress with the power to compel the disclosure of information that is critical to all other Congressional authorities.

President Richard Nixon was on the way, in 1974, to being impeached and convicted in the Senate, during the Watergate scandal, for defying just one subpoena and one count of obstruction of justice. Trump obstructs justice, the processes of law enforcement, all the time, as documented in part by the Mueller Report.

Trump talks about supporting law enforcement on the streets, while inciting his supporters to violence, yet he fires and intimidates prosecutors and Inspectors General who investigate or expose violations of law by Trump and his Trumpsters. Both his current government and personal businesses, as well as his previous ongoing personal business and taxation entanglements are under investigation by federal and state prosecutors.

The list goes on. Trump unlawfully nullifies statutory mandates by executive orders. His failure to enforce environmental, health, worker safety, and consumer protection laws is a direct violation of federal laws and the Constitution. He is dismantling these protections, driving out civil servants and scientists, and abandoning law and order for corporate crooks by defunding the corporate crime police.

Trump’s outlaw regime brags about destroying controls on pesticides (especially harmful to children), coal ash, and other sickening emissions that will attack the health of all Americans. Trump and his henchman also recently shredded controls on the release of methane, a global warming gas many times worse than carbon dioxide.

Why don’t the Democrats use what even the Wall Street Journal has regularly exposed about Trump’s riddance of law and order to allow runaway big businesses to cheat, pollute and overcharge people, as well as to defraud the federal government big time with procurement rackets? Trump is pushing for 20 million Americans to lose their health insurance, with no substitute proposal, and weakening nursing home safety regulations – in the middle of a giant pandemic!

One answer may be that the Democrats have done some similar things when in power, especially in the area of unauthorized wars and mass surveillance of the people. However, Trump sinks to utterly unprecedented levels of outlawry and openly embraces the monarchical boast that “I have an Article II, where I have the right to do whatever I want as president.”

Going for the capillaries

The daily tweeting, lying King, the man who boasted about abusing women, and behaving as a sexual predator, is a ruler who brings out the worst from this country. Trump deliberately divides America and stokes conflict and disruption. Trump is a reality denier and chaotic bungler who is aiding and abetting the climate crisis and preventing scientists and public health managers from controlling Covid-19, the cause of the worst global pandemic in our lifetimes. He is also blocking relief for a crashing economy and still escapes accountability.

The Democrats are not matching Trump’s own or his Party’s propaganda. In 2004, author, and former prominent Republican political analyst Kevin Phillips, argued that the Democrats go for the capillaries while the GOP goes for the jugular. By not going full force against dictator Trump, the Democrats are not overwhelmingly countering the most criminally, unconstitutionally culpable, vulnerable, and dislikable president in US history. With just over two months until the November 3rd election, a strong, independent, civic drive to oppose and vote out Trump/Pence is required. Standing on the sidelines hoping that the Democrats will retire the failed gambling czar didn’t work in 2016 and it won’t work in 2020 either.