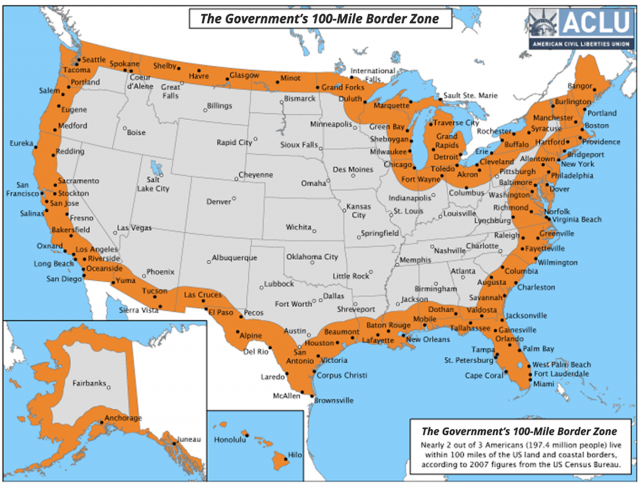 “We are exempt from the fourth amendment.”

If you were under the notion that America’s borders are our international boundary lines with Mexico and Canada, think again. The US government’s notion of “borders” has long been much more legally expansive than most people realize; the “border” is increasingly everywhere.

Americans learned that the hard way when “Trump troops” were let loose on the streets in Portland, assaulting protesters and pulling people out of their cars. These agents in military camouflage without insignia include the Department of Homeland Security’s Border Patrol Tactical Unit (Bortac), which usually operates on the US-Mexico border.

Border agents have long had something close to extra-constitutional powers. In the 1950s, Washington decided that a reasonable distance from the border for enforcement purposes was 100 miles – creating what the American Civil Liberties Union (ACLU) has dubbed a “constitution-free zone”.

At that time Congress made that decision, the border patrol was less than 1,000 agents. The force has since grown dramatically. Today there are 21,000 border patrol agents. Most of that growth is relatively recent: the number of agents more than quintupled from 1994 to the present day. The agency’s budget has also grown massively: since 1980 US government budgets for border and immigration enforcement have increased 6,000%.

Approximately 200 million Americans, or about two-thirds of the US population, reside within 100 miles of the border. This means that millions of Americans are within the patrol’s enforcement areas and subject to a permanent state of legal exception by armed agents and intrusive surveillance technology. This includes major cities such as San Diego, Tucson, El Paso, Buffalo and Detroit. Coastal areas such as Portland, Chicago, New York and Washington DC are also included in this zone, where agents are permitted to regularly search and seize based on “reasonable suspicion”.

“We are exempt from the fourth amendment,” a Customs and Border Protection official once told me.

In other words, agents been doing for decades what they were shown to be doing in Portland the last few weeks. They can snatch people in the middle of the desert, pull them out of their cars at checkpoints, or right off the street. They can interrogate, arrest and detain anyone at any time in these “border zones”.

On top of this…

The Department Of Homeland Security Is A Rogue Agency. Reluctant Democrats Must Take Action

The Department of Homeland Security (DHS) is a rogue intelligence agency that needs to be shut down.

It’s hard to reach any other conclusion on the heels of the DHS sending federal militarized police into Portland last month, where camouflaged and unidentified officers indiscriminately sprayed protesters with teargas and rubber bullets for more than two weeks. But even after the agency reached an agreement with Portland officials to leave, virtually every day we learn more about the DHS abusing its vast surveillance powers to spy on journalists, protesters and immigrants.

The Nation’s Ken Klippenstein, who has been breaking more scoops about the DHS than almost any other reporter alive, reported earlier this week that the DHS has been gathering information on activists who the agency thinks are involved in the antifa movement in an apparent attempt to tie them to foreign powers.

Some people in the Democratic leadership – especially the House intelligence committee chairman, Adam Schiff – have been placating and covering for intelligence agencies for the past four years.

An intelligence report leaked to the Nation included “a readout of these individuals’ personal information, including their social security numbers, home addresses and social media accounts, much of the data generated by the DHS’s Tactical Terrorism Response Teams”. As Klippenstein notes, the attempt to tie activists to foreign powers is key, as it would open up even more invasive and warrantless surveillance methods available to the DHS. (It’s worth noting that the federal government hasn’t been able to tie any protester it has arrested to antifa, let alone a foreign power.)

“They targeted Americans like they’re al-Qaida,” a source with knowledge of the surveillance operations told the Nation. If you think this sounds like an exaggeration, consider this: another leaked DHS document, this one posted by Lawfare’s editor-in-chief, Ben Wittes, showed that the DHS was creating “baseball cards” of arrested protesters. As the Washington Post noted: “Historically, military and intelligence officials have used such cards for biographical dossiers of suspected terrorists, including those targeted in lethal drone strikes.”

After this information was made public, DHS officials responded by compiling “intelligence dossiers” on two journalists – Wittes and the New York Times reporter Mike Baker – and distributed it to law enforcement around the country.

Those documents targeting journalists were also leaked to the press, forcing the DHS acting chief, Chad Wolf, to express regret and curtail the practice. He supposedly reassigned the DHS official in charge of the creation of the dossiers. …