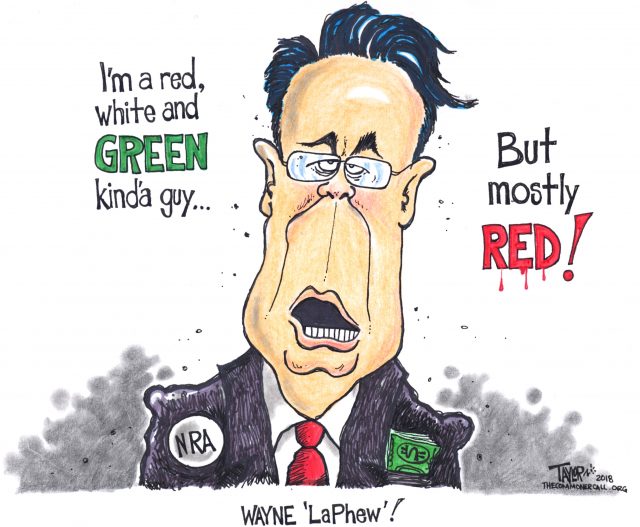 Oliver North cut a lonely figure as he walked through the Indianapolis airport, quietly slipping out of the city midway through the National Rifle Association’s (NRA) convention which was still in progress. A day later, North announced from afar that he was not seeking a traditional second term as its president, while it also emerged that the New York attorney general was investigating the NRA’s tax-exempt status.

That was April 2019. More than a year later, the turmoil that heralded North’s departure has culminated in the New York attorney general, Letitia James, suing to put the NRA out of business, alleging that senior leaders used charitable donations for family trips to the Bahamas, private jets and lavish meals that shaved $64m off the organisation’s balance sheet in three years, turning a surplus into a financial crisis.

The NRA has been the most powerful gun lobby in the world since another former president of the group, Hollywood actor Charlton Heston, promised to resist efforts to prise firearms “from my cold, dead hands”. It has fought to suppress research on the danger of guns in society, keep open loopholes for background checks on gun sales and even for firearms to be present in schools.

The NRA also has been an electoral ally of Donald Trump, spending $30m to help him beat Hillary Clinton in 2016. Democrats, gun control activists and others have fought long and hard to curb its influence. But in the end, the NRA’s worst enemy was the NRA. Victim of its own success and hubris, it strayed from its core purpose and shot itself in the foot.

James’s lawsuit is not about politics but the actions of the NRA’s leaders. Far from a heady battle over the second amendment and soul of America, the non-profit organisation has been brought low by allegations of petty corruption and banal self-dealing.

The suit, filed in state court in Manhattan after an 18-month investigation, names the NRA as a whole and four senior executives including Wayne LaPierre, the executive vice-president who become the face of the NRA and frequently gives pro-Trump, red-meat speeches to thunderous applause. …

Expert: NRA Had To Be Obliterated By New York AG For One Very Important Reason

The New York attorney general’s aggressive moves against the National Rifle Association might have been handled by the U.S. Department of Justice, according to a former federal prosecutor.

“Like other cases of corruption, this easily could have been framed as a criminal case,” McQuade wrote. “Filing false registration and disclosure documents as part of a scheme to defraud can serve as the basis for federal mail or wire fraud, and often does in public corruption cases. When I served as a federal prosecutor, my former office brought public corruption cases on such theories in similar cases in which officials misused funds for personal benefit.”

“Why then, is it left to James, whose office’s oversight over charities is civil in nature, to bring this action?” she added. “The silence of the U.S. Department of Justice here is deafening.” …