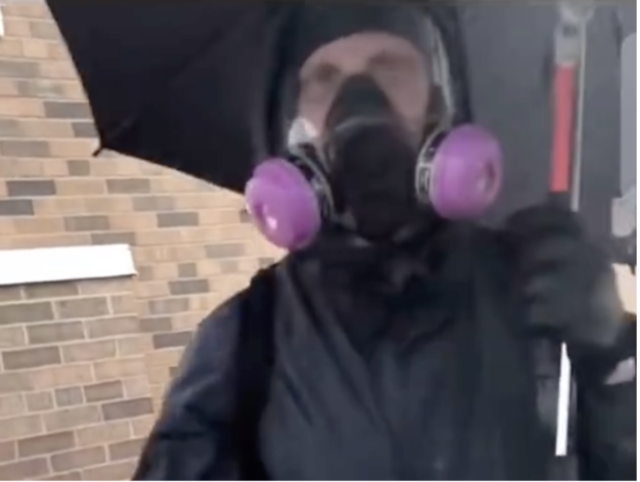 A masked man who was seen in a viral video smashing the windows of a south Minneapolis auto parts store during the George Floyd protests, earning him the moniker “Umbrella Man,” is suspected to be a member of the Hell’s Angels biker gang seeking to incite racial tension in a demonstration that until then had been peaceful, police said.

A Minneapolis police arson investigator said the man’s actions at the AutoZone on East Lake Street set off a chain reaction that led to days of looting and rioting. The building was later burned to the ground.

“This was the first fire that set off a string of fires and looting throughout the precinct and the rest of the city,” Erika Christensen wrote in a search warrant affidavit filed in court this week. “Until the actions of the person your affiant has been calling ‘Umbrella man,’ the protests had been relatively peaceful. The actions of this person created an atmosphere of hostility and tension. Your affiant believes that this individual’s sole aim was to incite violence.”

Police identified the suspect thanks to a tip that came via email last week, Christensen said.

At least two people died in the subsequent riots, which eventually spread as far as north Minneapolis and South St. Paul, and caused an estimated $500 million in damage. …

RICHMOND, Va. – Riots in downtown Richmond over the weekend were instigated by white supremacists under the guise of Black Lives Matter, according to law enforcement officials.

Protesters tore down police tape and pushed forward toward Richmond police headquarters, where they set a city dump truck on fire.

Six people were arrested. The mayor of Richmond thanked the Black Lives Matter protesters he said tried to stop the white supremacists from spearheading the violence.

“Their mission is simple, not the Richmond we know,” said Mayor Levar Stoney. …