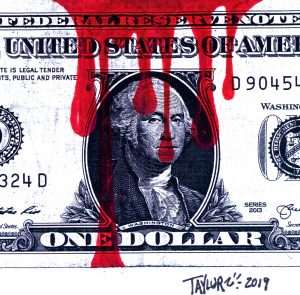 Faced with mass teacher layoffs, deep cuts to education and social services, and a looming eviction crisis, police budgets across the nation remain absurdly high and have been largely insulated from Covid-induced belt-tightening. Worse yet, a number cities have opted to increase police budgets, claiming the funds are needed to pay for reforms. This is despite the fact that racial justice protesters across the country are clearly calling for the defunding of police—a demand that stems from abolitionist principles. Budget cuts are seen as part of a process of dismantling prisons and policing while investing in community alternatives and social goods, in order to reimagine public safety.

These cuts extend beyond education. Public services—from healthcare to social security to affordable housing—are bearing the brunt of austerity measures while over 20 million renters are at risk of eviction by the end of September.

In Phoenix where activists demanded a 25% cut in the police budget, the city voted on a $24 million increase to the department for the upcoming fiscal year, even as the city anticipates a $26 million budget deficit over the same period. The Phoenix Police Department’s $592 million annual budget will account for over 40% of the city’s discretionary funds, with $3 million going to a new police oversight agency. Rejecting residents’ calls to cut police spending, San Diego increased its annual police budget by $27 million to $566 million. The department will account for about a third of the city’s general fund and will create a new Office of Race and Equity. In Louisville, Ky., where Breonna Taylor was shot by police in her bed after officers enforced a no-knock warrant, the city has decided to increase the annual police budget by three-quarters of a million dollars, while claiming to funnel resources into reforms like a civilian review board. The decision followed demands to cut $100 million from law enforcement and reinvest in social services. Meanwhile, the Louisville City School District has approved $1.35 million in cuts to education and has already laid off 32 employees. Similarly, Atlanta increased its police budget by $14 million as Georgia cut over $1 billion in education and 4% of the state’s healthcare budget. Houston, Kansas City, Nashville and Tulsa have also increased funding to police in the upcoming year’s city budgets.

Tracey Corder, the campaign coordinator on policing work at the Action Center on Race and the Economy, is not pleased with this trend. “We know that budgets are moral documents. They reflect priorities,” says Corder. “I think it is not only backwards, but it’s also a little cowardly, if we’re being honest, to take this moment and decide that we are going to invest in more policing and not in the real things that communities are calling for that we know actually make people safe.”

On average, roughly a third of city and town general funds, which are discretionary and largely made up of property taxes, are devoted to police departments, which often account for the largest budget item, according to an analysis by Sludge. In cities like Oakland, Calif. and Milwaukee, Wis., police budgets are closer to 45%. Globally, the United States spends $115 billion on police annually, a number that is greater than Saudi Arabia’s entire annual defense budget.

Education budgets have not fared as well. …