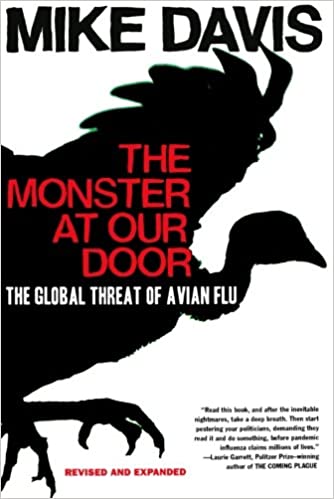 If the book has a villain, it is private industry: from the pharmaceutical giants, whose market-led inaction has halted research into influenza, to the rise of factory farming, and the industrialization of nature.

Mike Davis has good claim to being the most important Marxist historian of the past fifty years. While his work may not have the vast geographical or temporal scope of Perry Anderson, Ellen Meiksins Wood, or Robert Brenner, nor has it mined a particular period or subject with the focus of a figure like E. P. Thompson, Robin Blackburn, or Christopher Hill, its influence and its singular depth makes Davis’s work stand out.

On the surface, his writings may appear disparate, ranging from the early essays on the history of the US working class to his more recent studies of Third World slums, the history of the car bomb, and the radical history of Los Angeles in the 1960s, to name just three examples. Yet the diversity of Davis’s interests are linked by his near singular focus on global class relations and his writing is marked by a startling prescience. His oeuvre has opened entire continents of research, each one written in his typically sparkling, lucid prose.

The dire warnings offered in Davis’s book are ones that will remain until we can begin to disentangle the causes of the pandemic threat, rooted as they are in capital’s insatiable thirst for new lands to conquer, new wilderness to flatten, and new tracts of land to turn into vast factory farms.

Of his many books, none has been so darkly prescient as The Monster at Our Door, first published fifteen years ago, and now, amid the first wave of COVID-19, reissued by OR Books as The Monster Enters: COVID-19, Avian Flu, and the Plagues of Capitalism. In its original version, Davis sought to warn us of the impending threat of an avian flu pandemic, which, he argued, would likely have a catastrophic global impact.

If Davis’s warning was stark, then its reception was far more muted. In a characteristic example, the British newspaper the Independent began its review by asking, “Is this scaremongering? A lot of people seem to think so.”

If in the mid-2000s, his predictions of the coming plague seemed eccentric to many, by early 2020, it was clear that Davis’s grave warning had been gravely overlooked. The pandemic has finally come in the proportions that Davis described, though from a different source than that he predicted.

Instead of avian flu — H5N1, or its even deadlier cousins H7N9 and H9N2 — we are confronted with the global outbreak of the novel coronavirus, COVID-19. As it tears through the global population, it has, as few need reminding, left a crisis of catastrophic proportions.

Our pandemic shares many traits with that which Davis foretold fifteen years earlier. …