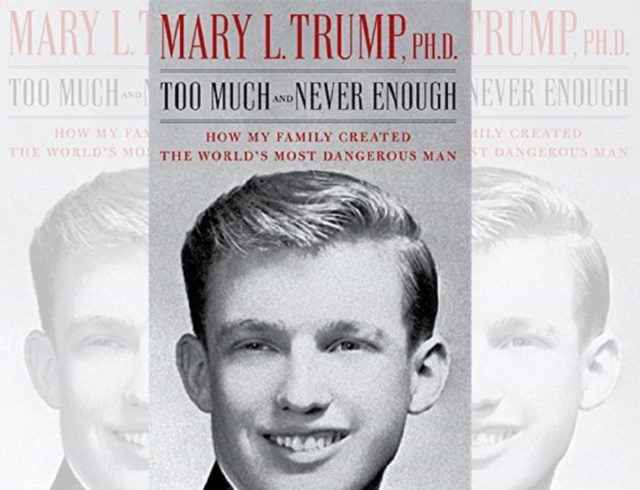 The World’s Most Dangerous Man. It helps to delve into this for the light it sheds on Trump’s indifference to the human cost of the coronavirus. What was done to Trump and what Trump has done to his own family sets up what he’s now doing to us. In her book Too Much and Never Enough: How My Family Created the World’s Most Dangerous Man Trump’s niece Mary Trump delves into the family history and  experience her uncle had being raised by a “sociopath who damaged his children…led the president to adopt bullying and other aggressive behaviors to mask his own insecurities.”   Trump despises what he sees as weakness, a product his father, Fred Trump Sr., modeled and was adopted by Trump. Something as simple as ‘I’m sorry’ would elicit rebuke and punishment. What do we learn: Trump despises empathy and will punish weakness or disloyalty.

Mary Trump — a clinical psychologist — has done us all a favor. Her book has hit the media for review and there is an eye-opening deluge of excerpts and commentary. We learn that Donald Trump paid someone to take his SATs ultimately leading to his acceptance to his much cherished University of Pennsylvania Wharton School, something Mary casts in a broader light as “cheating as a way of life” . We learn that Mary Trump was the source for the documents provided to the New York Times about Trump’s lies about inheritance and his long history of tax fraud. The grandaddy report was, ‘Trump Engaged in Suspect Tax Schemes as He Reaped Riches From His Father’. The story was lengthy and damning and it turns out it was the result of Mary’s efforts.

One final point on Mary, MSNBC host Rachel Maddow highlighted the lengths Mary went to in providing the documents to the New York Times while “hobbling on crutches”: ‘”When the Supreme Court hands down the decision about Trump’s taxes – read page 185’”.

“…Mary Trump discovered that her uncle and aunt had taken all of the money from Fred Trump and siphoned all of his money out of accounts and into trusts.

While Trump has consistently ‘failed upwards’ and is yet to pay a price for the damage he has wrought throughout his life, it is suspected that his partner in ‘family inheritance crime’, his sister Maryanne Trump Barry, resigned her position as a federal appellate judge “ending an investigation into whether she violated judicial conduct rules by participating in fraudulent tax schemes with her siblings.”

As author, strategist and NeverTrumper Rick Wilson coined as his book title, ‘Everything Trump touches dies’.

Many follow in Trump’s footsteps, empowered and driven with their own motivations. Fox News host and racist Tucker Carlson went on air on Monday night and offered about verteran and Purple Heart medal recipient, Sen. Tammy Duckworth (D-IL), “it’s not easy to go after a Purple Heart recipient who lost both her legs while serving her country in Iraq. You’re not supposed to criticize Tammy Duckworth in any way because she once served in the military.” Before calling her a “deeply silly and unimpressive person…actually hate America”. To which Duckworth responded, “does @TuckerCarlson want to walk a mile in my legs and then tell me whether or not I love America?”

There are many that have stepped forward to inform us of Trump abuses, for now, few have benefited. A hero like Lt. Col. Alexander Vindman, a key witness against Trump in the impeachment hearings, is retiring from the US Army after more than 21 years of military service because he determined that his future in the armed forces “will forever be limited” due to political retaliation by the President and his allies, his lawyer told CNN Wednesday.

Considering how Trump’s much beloved fellow authoritarians treat such acts maybe retirement isn’t so bad. A Russian former journalist and aide to the head of Russia’s space agency, Roscommons, Ivan Safronov was just arrested and charged with “passing secrets to an unnamed NATO country”. Maybe there will be a show trial, but history does not bode well for Safronov in a country with a history of people falling out of windows or being murdered outside Russia.

We have our own long history of mistreatment of whistleblowers. It is often commented that Trump is merely representative of an evolution and it is true that the Bush-Cheney (GOP) White House outed a US covert intelligence officer Valerie Plame over her purported role in uncovering one of the Bush-Cheney-Iraq War lies, Iraq’s alleged import of uranium from Niger. Plame was ‘outed’ putting her entire network of contacts at personal risk. No shits given by the Law & Order party.

Trump stands accused of sitting on reported intelligence pointing to Russian bounties paid to the Taliban for killing US military in Afghanistan. While Trump has yet to deny, there is a kerfuffle over whether leaked military intelligence should be considered. In a perfect world this is a starting point, not a trigger for some poorly explained action against another country. But in Trump’s world — who has not denied the news — it calls for retribution … against the leakers. A Politico article — ‘White House searches for intel leakers’ — reports the leaked items were “cherry-picked despite a steady stream of follow-ups from media outlets across the globe” and may now be close to outing the sources – “has narrowed down the universe of suspects to fewer than 10 people.”

This is Trump – this is the man that is both ignoring the consequences of 135,000 US Coronovirus deaths while pushing for further reopening. The University of Washington “has extended its projection of how many people are likely to die from coronavirus in the US to November 1, predicting at least 208,255 deaths by then, based on the current scenario.” I believe the ship has sailed on getting the US to 95% use of masks, but the release also says, “if 95% of the population wears a mask in public, that number would drop to approximately 162,808, the university’s Institute for Health Metrics and Evaluation (IHME) said Tuesday.”

Trump has cost us many thousands of lives through happy talk, delayed response and outright ignoring of the facts. On a recent day when Canada reported 399 new cases, the US is mostly reporting new cases over 50,000; a tragic increase in a matter of weeks.

Trump, without evidence, assures us he’s saved MANY lives, after asking VP Mike Pence for the current number of US deaths, he offered, “We’re at 130 [thousand]. We could be at way over a million right now, and I think it could’ve been 2.5 or 3 million.” I dare you to watch every segment, I bet you can’t.

This was part of a July 7 roundtable where Trump was pushing for reopening of schools. Without evidence, Trump offers, “We want to reopen the schools. Everybody wants it. The moms want it.” There was much praise for Trump, one of the few masks was worn by Trump’s coronavirus response coordinator Dr. Deborah Birx, with highlights like Trump Education Sec. Betsy DeVos regaling us with cheerleading like, “Under the president’s strong leadership, our economy is roaring back. Our schools must do the same.”

This is the model – Trump’s NON-plan – “We’re not closing. We’ll never close.” Pushing for what is good for him, surrounded by sycophants, rallying the believers, ignoring facts – and offering no details of how to proceed. Trump: ‘Full Speed Ahead, Reelection is Right Ahead of Us’. DeVos is all-in: “I was disappointed frankly in schools and districts that didn’t figure out how to serve students or that just gave up and didn’t try.”

Predictions are that federal funds for reopening will be tied to rewards for reopening progress and funds targeted for public schools will be shared with wealthy private schools.

In the wake of the Trump-DeVos rally, Pence went forward the next day to repeat the message and promise (revised) ‘reopen’ friendly guidelines along with CDC DIrector Robert Redfield offering, “Our recommendations are not requirements, and they’re not meant to be prescriptive.” Going all-in on Trump’s ‘I take no responsibility’.

We heard from Birx, we heard from Redfield… where’s Fauci? He’s not invited, Trump once again wants you to know he’s sidelining the Debbie-downer coronavirus voice of reason, assuring us, “I think we are in a good place, I disagree with him.”

So US coronavirus cases are on the increase, we learn that one driver for the spread is the 18-to-35-year-old age group. Some states experiencing the greatest increases like Florida, Arizona, Texas and California are rolling back some aspects of reopening including closing some bars and restaurants. Against the images of Trump and Trumpsters without masks, there is a growing cry for wearing masks. Imagine states concerned about a lack of hospital beds finally waking up and encouraging responsible social behavior. Too late?

Florida Republican Governor Ron DeSantis — a long-time risk-denier and super reopening proponent — got a come-uppance from Florida Education Association president Fedrick Ingram, “ We want to proceed with caution, but unfortunately the governor continues to deny the science. The trend over the last 30 days has been astronomical. We’re in regression, we’re going backward. In terms of the amount of cases, we are literally going backward as a state.”

We learn that another authoritarian and coronavirus denier Brazil President Jair Bolsonaro has tested positive.

Use good judgement, be safe.