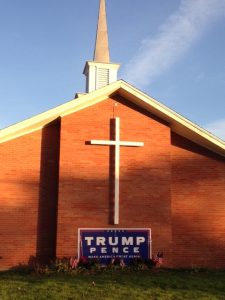 “The part of the country that was the most fervent about religious faith was also the one that practiced white supremacy most enthusiastically.”

hen a young Southern Baptist pastor named Alan Cross arrived in Montgomery, Ala., in January 2000, he knew it was where the Rev. Martin Luther King, Jr. had his first church and where Rosa Parks helped launched the famous bus boycott, but he didn’t know some other details of the city’s role in civil rights history.

The more he learned, the more troubled he became by one event in particular: the savage attack in May 1961 on a busload of Black and white Freedom Riders who had traveled defiantly together to Montgomery in a challenge to segregation. Over the next 15 years, Cross, who is white, would regularly take people to the old Greyhound depot in Montgomery to highlight what happened that spring day.

“They pull in right here, on the side,” Cross said, standing in front of the depot. “And it was quiet when they got here. But then once they start getting off the bus, around 500 people come out – men, women and children. Men were holding the Freedom Riders back, and the women were hitting them with their purses and holding their children up to claw their faces.” Some of the men carried lead pipes and baseball bats. Two of the Freedom Riders, the civil rights activist John Lewis and a white ally, James Zwerg, were beaten unconscious.

Though he had grown up in Mississippi and was familiar with the history of racial conflict in the South, Cross was horrified by the story of the 1961 attack on the Freedom Riders. Montgomery was known as a city of churches. Fresh out of seminary, Cross had come there to preach the gospel of Jesus Christ.

“Why didn’t white Christians show up?” he recalled wondering.

To his dismay, Cross learned that many of the people in the white mob were regular churchgoers. In the years that followed, he made it part of his ministry to educate his fellow Christians about the attack and prompt them to reflect on its meaning.

“You think about the South being Christian, but this wasn’t Christianity,” Cross said. “So what happened here in the white church? How did we get to that point?” It’s a question he explored in his 2014 book, When Heaven and Earth Collide: Racism, Southern Evangelicals, and the Better Way of Jesus.

The answer to the question lies partly in U.S. history, beginning in the days of slavery and Jim Crow segregation, but not ending there. Elements of racist ideology have long been present in white Christianity in the United States.

Racism from the pulpit

Less than three weeks after the 1961 attack on the Freedom Riders, Montgomery’s most prominent pastor, Henry Lyon Jr., gave a fiery speech before the local white Citizens’ Council, denouncing the civil rights protesters and the cause for which they were beaten — from a “Christian” perspective.

“Ladies and gentlemen, for 15 years I have had the privilege of being pastor of a white Baptist church in this city,” Lyon said. “If we stand 100 years from now, it will still be a white church. I am a believer in a separation of the races, and I am none the less a Christian.” The crowd applauded.

“If you want to get in a fight with the one that started separation of the races, then you come face to face with your God,” he declared. “The difference in color, the difference in our body, our minds, our life, our mission upon the face of this earth, is God given.”

Lyon saw himself as a devout Bible believer, and he was far from an extremist in the Southern Baptist world. A former president of the Alabama Baptist Convention, his Montgomery church had more than 3,000 members.

How respected people of God could openly promote racist views was a question that would trouble many Southerners in the years that followed. …

“So often the contemporary church is a weak, ineffectual voice with an uncertain sound. So often it is an arch-defender of the status quo. Far from being disturbed by the presence of the church, the power structure of the average community is consoled by the church’s silent — and often even vocal — sanction of things as they are.”

(Commoner call photo by Mark L. Taylor, 2020. Open source and free for non-derivative use with link to www.thecommonercll.org )