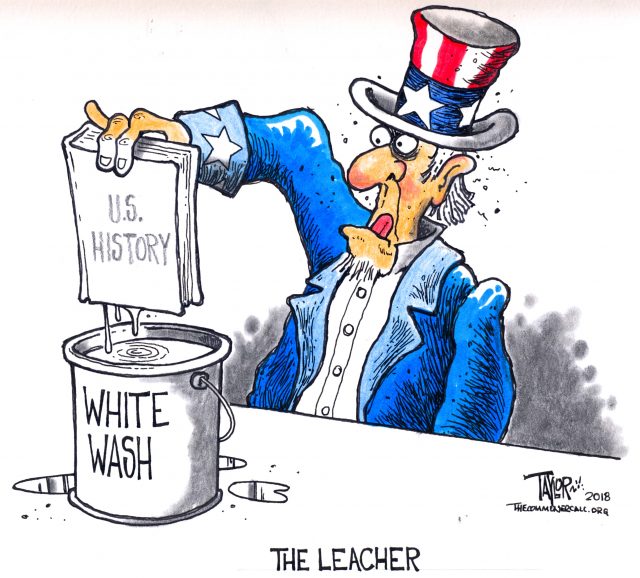 Gordon J Davis’s first encounter with the political writings of Woodrow Wilson was as a student at Columbia University. “I’m reading this stuff and saying: ‘That’s a great man,’ and mentioned it to my father who said: ‘Well, he wasn’t such a great man to us,’” recalls the 78-year-old Davis, who is a senior lawyer in New York. “He didn’t say much more about it but then, all these years later, you find out how totally corrupt and racist he was.”

There is no shortage of tributes to Wilson in Washington – a leading thinktank, a high school, a house museum – and he is the only US president buried in the nation’s capital. But in the wake of the police killing of George Floyd, Black Lives Matter protests and a mass awakening to systemic racism, his legacy of white supremacy is under scrutiny as never before.

In the US capital, adorned with its many monuments to American history, he is also far from alone.

We’ve reached a reckoning point of history, of reconciling the truth of American history.

The same revisionism is also happening for numerous other presidents whose names and likenesses adorn the 230-year-old city. From grand boulevards and soaring memorials to tree-lined suburbs and sports stadiums, nowhere does America’s current reckoning with its racist past resonate more profoundly than in a place named after George Washington, a founding father who owned slaves.

For Davis, it is very personal. His grandfather, John Davis, was a high achieving African American student who went on to a job at the Government Printing Office, rose to manage an office of white staff and earned enough money to own a home in Washington and farm in Virginia.

But when Wilson, a Virginia Democrat, became president in 1913, he oversaw resegregation of the federal civil service after decades of racial integration. The purge of management positions dealt a bitter blow to Washington’s growing black middle class. John Davis was demoted, had his pay cut and was eventually forced to auction off the family farm.

Gordon J Davis was born after his grandfather’s death in 1928 but has studied his personnel file in depth. “He was a very self-made man, very successful in terms of the black community in those days, and then Wilson became president and all of a sudden, his life was crushed,” he said.

Wilson is still revered by many as a progressive, internationalist statesman who led America into the first world war with a statement seen as foundational for a century of US foreign policy: “The world must be made safe for democracy.” A street in Paris is named after him. His tomb resides at the Washington national cathedral.

But he was also an unabashed racist who screened the white supremacist epic Birth of a Nation at the White House. The silent film includes a caption quoting Wilson’s writing: “The white men were roused by a mere instinct of self-preservation … until at last there had sprung into existence a great Ku Klux Klan, a veritable empire of the south, to protect the southern country.” …

An argument between history professors over a statue which many protesters say should be removed from Lincoln Park in Washington led to the discovery of a letter in which Frederick Douglass described his feelings about it.

“The negro here, though rising, is still on his knees and nude,” the civil rights campaigner wrote to the National Republican newspaper in 1876, about the statue of Abraham Lincoln, the 16th president, standing over a man who has broken his chains.

“What I want to see before I die is a monument representing the negro, not couchant on his knees like a four-footed animal, but erect on his feet like a man.”

Amid protests over structural racism and police brutality, debate over such statues has surged. …