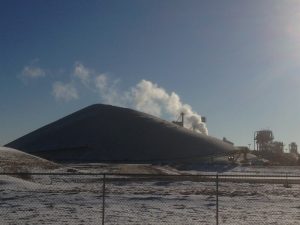 One of Wisconsin’s largest sand mining companies plans to file for bankruptcy and says it may be forced to go out of business after losing nearly $147 million in the first three months of 2020 and seeing a sudden and sharp decline in sales with the ensuing pandemic.

Hi-Crush Inc. has shuttered three of its four Wisconsin sand mines amid a recession and glut of imported oil that have eroded demand for its sand, which is used in oil and gas drilling.

The first quarter losses announced Thursday include a $116.6 million write-off of the value of the Hi-Crush facility in Blair and $29 million in impairment of other assets.

Hi-Crush said it has reduced its workforce by about 60% since mid-March and closed mines in Blair and Whitehall. The Hi-Crush mine in Augusta has been closed since Jan. 2019.

The company says it is operating its facility in Wyeville — along with a mine in Texas — at reduced capacity.

In regulatory filings that Hi-Crush said were delayed by the COVID-19 pandemic, the company said it is negotiating with holders of unsecured loans for a prearranged bankruptcy filing; however, Hi-Crush said it expects to file bankruptcy even if no agreement is reached. …

US Shale Gas Giant Brought Down By Debts & Oil Slump

The collapse of Chesapeake Energy, one of the pioneers of the US shale industry, took few people by surprise. The embattled fracker slumped into bankruptcy weeks after the darkest month in oil market history, in a financial mess of missed interest payments, looming bond deadlines and crippling debts.

Its collapse is not the first bankruptcy to hit the oil industry in the wake of the coronavirus crisis, nor will it be the last. But the fall of a company once considered one of the shale revolution’s brightest stars may mark a crucial watershed for an industry in flux.

The upstart oil driller was founded in the late 1980s by Aubrey McClendon and Tom Ward with a modest $50,000 investment. By the 2000s it had emerged as one of the fastest-growing companies within the US shale revolution.

Chesapeake was the indisputable master of US shale gas, according to Per Magnus Nysveen, the head of analysis at Rystad Energy. It would also emerge as one of the industry’s most high-profile casualties.

The Oklahoma-based company told investors this week that it had entered chapter 11 bankruptcy saddled with $9bn worth of debt. Its demise came just weeks after its top executives were handed bonuses totalling $25m as “incentive pay”. …