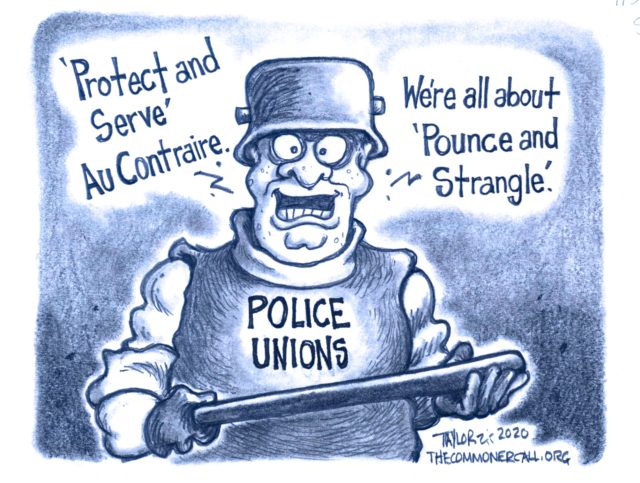 “When the police have the ability to take away liberty, the police should not be policing themselves.”

A court in 2009 convicted Washington DC police officer Michael Sugg-Edwards of sexually assaulting a teenage woman in his squad car. After conducting its own internal investigation, the department quickly fired the then 35-year-old officer.

But, six years later, Sugg-Edwards was back on the force. A provision in the police union’s contract allowed him to appeal the decision to a union-selected arbitrator who reversed the department’s firing and reinstated him – with back pay.

Such protections for officers who commit crimes are not unique to Washington. About 475 police union contracts at the nation’s largest departments hold similar arbitration provisions, according to a 2019 Loyola University study. Those are accompanied by a startling array of other complex protections that shield officers accused of often violent misconduct from accountability.

The report stated that collective bargaining agreements “provide an unfair advantage to officers” and “have essentially turned the code of silence into official policy”.

It all builds up to form a picture of how police contracts – which, like other labor contracts, govern the working conditions under which officers operate – have rendered police departments’ disciplinary and oversight processes ineffective as officers are rarely held accountable for wrongdoing. That then encourages the police violence that sparked the massive nationwide protests in the wake of George Floyd’s killing by a white police officer in Minneapolis.

“These [contract provisions] tie the hands of police chiefs and others who are trying to hold police officers accountable,” said Carl Takei, an ACLU senior staff attorney focused on police practices. “It makes it very difficult to fire or discipline officers who engage in misconduct.”

The protections’ impact on officer accountability is documented in a growing body of empirical studies and analyses. Nearly 90% of contracts at 178 midsize-to-large departments have at least one “problematic provision” that “could thwart legitimate disciplinary actions against officers engaged in misconduct,” Loyola policing scholar Stephen Rushin wrote in a 2017 study of contracts and police bills of rights.

Among police-friendly provisions that Rushin and Campaign Zero, an activist group that tracks police union contracts, identified in separate analyses of over 650 departments …

(Commoner Call cartoon by Mark L. Taylor, 2020. Open source and free for non-derivative use with link to www.thecommoner call.org )

If Police Will Lie About A Tampon In A Coffee, How Can We Trust Them On Anything?

It is one of the most stomach-churning mysteries of our time. Did a Starbucks barista really put a tampon in a cop’s coffee? Or did the cop fabricate the incident? Enquiring minds want to know.

Earlier this week Bill Melugin, a reporter for a Fox News affiliate in Los Angeles, tweeted a photo of what he claimed was a tampon that had been sneakily submerged in an off-duty police officer’s Frappuccino. Melugin noted that the officer had used his police credit union debit card to pay for the drink – thereby alerting staff to his occupation. We are left to presume that a radicalized cop-hating barista trained in sanitary warfare cruelly took advantage of the situation.

We shouldn’t dismiss incidents like the Shake Shack “poisoning” as silly lies by a few bad apples – they point to a deeper rot in policing.

I’m not sure whether Melugin has ever seen a real-life tampon before but the mega-long object he tweeted doesn’t really look like one. And that’s not the only thing that doesn’t quite add up about this incident, which is now being investigated by both the police and the internet. Target, which licenses the Starbucks in question, has reviewed security footage and said they didn’t find any suspicious behaviour.

It is too early to draw final conclusions about the Tamp-puccino trauma. However it is worth noting that America’s police officers seem to find themselves embroiled in fabricated fast-food fracases with alarming regularity. Earlier this month, for example, three New York cops alleged that their Shake Shack milkshakes had been poisoned; it turned out the imaginary incident had probably been invented by the police labor union. Then there was the Kansas police officer who admitted that he’d lied about being served a McDonald’s coffee with “f-ing pig” written on it. And the Indianapolis cop who forgot he’d taken a bite out of his McChicken and fries and claimed a rogue McDonald’s employee had sabotaged his lunch.

The 75-year-old peaceful protester pushed to the ground by two Buffalo, New York, police officers nearly a month ago has been released from the hospital, his attorney said Tuesday.

After suffering a brain injury and fractured skull, Martin Gugino was released from Erie County Medical Center in Buffalo, and is “recovering at an undisclosed location in order to ensure his privacy,” according to his attorney, Kelly Zarcone.

“Martin wants to thank the entire hospital staff for their exceptional dedication and professionalism. He received truly outstanding care and for that, he is grateful,” Zarcone said in a statement. “I was able to see Martin today and he looks great.”

On June 4, Gugino was seriously injured during anti-racist protests that have swept the U.S. following the police killing of George Floyd. Graphic cellphone video that quickly went viral showed Gugino attempting to talk to officers in Buffalo’s Niagara Square as police begin to enforce the city’s 8 p.m. curfew. Two officers are seen shoving him and Gugino is seen hitting his head on the pavement, where he lay motionless with a small pool of blood forming around his head. The officers kept walking. …