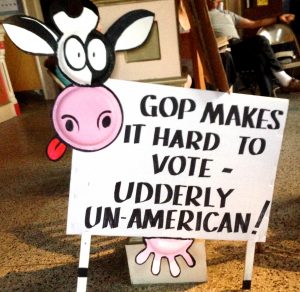 A federal appeals court reinstated significant voting restrictions in Wisconsin on Monday, handing Republicans a victory just months before the November election in one of the country’s most important battleground states.

The ruling reinstates a Republican-backed law that allows local election officials to offer only two weeks of early voting before election day. That restriction will have a severe impact on cities like Madison, which had tentative plans to offer nearly a month of early voting this fall and Milwaukee, which offered nearly six weeks of early voting ahead of the 2018 general election. Both are cities with large minority and student populations, two groups that have been traditionally disenfranchised.

Wisconsin Republicans also sought to extend the amount of time someone had to live in a district in order to vote there, saying it should be 28 days and not 10. The court also upheld strict Republican-backed limits on faxing or emailing ballots.

Judge Frank Easterbrook wrote that the voting restrictions were acceptable because Republicans who controlled the legislature were not discriminating against voters based on race, but based on their political affiliation. He relied on a 2019 US supreme court ruling concluding that partisan manipulation of electoral districts was acceptable.

“The changes were made because of politics,” he wrote. “This record does not support a conclusion that the legislators who voted for the contested statutes cared about race; they cared about voters’ political preferences.” He added that Democratic lawmakers could retake control of the legislature and change the laws they objected to in the future.

The decision could lead to severe efforts to change electoral rules for political gain, said Barry Burden, director of the Elections Research Center at the University of Wisconsin-Madison.

“This is an amazing conclusion that opens the doors to all kinds of partisan manipulation of election practices,” Burden said. “It completely ignores the possibility that the party in charge might be able to alter the rules to keep itself in power, thus removing the ability of the opposing party to change the laws in the other direction.”

The judges wrote that “early voting is not a fundamental right in itself” and that Wisconsin made it easy to vote in other ways such as allowing voters to request an absentee ballot for any reason and register to vote at the polls on election day.

But Neil Albrecht, the retiring executive director of the Milwaukee Election Commission, said the limits on early voting were a form of voter suppression. “There can be no debate that restrictions to in-person absentee or “early” voting in Wisconsin are a political strategy to suppress the vote, particularly for communities with the greatest reliance on alternative voting opportunities: single-parent families, households where family members have multiple jobs, and students,” he wrote in an email. …