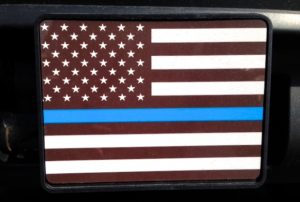 [Editor’s Note: If these police “warriors” want to really get on top of real crime have them parachute into Wall Street. — Mark L. Taylor]

A group of police officers, kitted out for a day of shooting, sit silently in a tin-roofed gun range. A portable CD player plays a recording of the desperate cries of one of their colleagues, fighting for his life. The range instructor, Tony Semanant, a former Marine and SWAT operator, clad in olive drab, then tells his students the purpose of the next three days of intensive training: “You’re fucking going home at night to your fucking family,” he says.

Suddenly, the trainees, who are being filmed as part of a promotional video for RealWorld Tactical, a Florida-based training and gear outfit, explode into action. Quick cuts show officers shooting AR-15s through car windshields, shooting from inside vehicles, sparring with multiple opponents, and carrying each other under the cover of smoke. “I’m here because I don’t want to be a statistic,” says one participant to the camera.

RealWorld Tactical’s training regimen is the embodiment of the “warrior” culture that permeates American law enforcement. It preaches that police work is inherently violent, and that officers represent the last opportunity for law and order in an increasingly dangerous society. In this world, police are alone, even reviled by the public — their actions misunderstood and the threats they face underappreciated.

“They are taught that they live in an intensely hostile world. A world that is, quite literally, gunning for them,” writes Seth Stoughton, a law professor and former police officer, in an article for the Harvard Law Review. “Death, they are told, is constantly a single, small misstep away.”

The problem with warrior-style policing, as critics and academics point out, is that it prepares officers for violence. And indeed, some of the cops involved in the most visible police shootings have undergone warrior cop training.

While the warrior narrative has existed in law enforcement circles for decades, it has intensified in recent years, driven by the flood of funding and surplus military equipment made available to police departments following the terror attacks on September 11, 2001. There is now a cottage industry of police consulting firms, which charge departments thousands of dollars to teach tactics more suited for war than for civil society.

“I’m officially born again hard” wrote one veteran Texas officer in a review of a narcotics enforcement course presented by Triple I Solutions. Another officer, who attended a similar class by the same company in Louisiana, extolled the virtues of learning to shake down areas “normally considered ‘taboo’ to search.”

Other companies help departments apply the warrior mentality to aspects of policing beyond combat. Dolan Consulting Group, for instance, offers a course to help agencies analyze their data on traffic stops, arrests, and use of force, to avoid “false evidence of racial disparities.” Otherwise, departments risk “needlessly destroying your agency’s reputation and deflating the morale of your honest, hard-working personnel.” Another company, Security Systems International, which has held trainings with more than 1,000 agencies, offers “Radical Islam.” The class begins with a lesson on “how the cultural seeds of Radical Islam are inherent in the historical development” of the religion. The company has been accused of perpetuating anti-Muslim sentiment with its teachings.

“Now is a time for police departments to engage in serious conversations about racial profiling and wanton violence,” said Arjun Sethi, a human rights lawyer and professor at Georgetown University Law Center. “Instead, some are engaging third parties in an effort to claim that they don’t commit abuses, or worse, working with militarized and security services providers to further crack down on Black and Brown communities.”

A review of police training websites shows that courses typically cost between $300 to $1200 per head. Enrollment fees often do not account for equipment, ammunition, or travel. Some police officers pay for courses out of their own pockets. But funding often comes directly from departments’ budgets. Some programs can be booked only once an agency secures a minimum number of participants.

For departments without the means to hire training companies, the federal government offers grant programs to help finance classes. South Carolina’s Government Training Institute even accepts old equipment and seized assets as a form of credit for training courses. That credit can also be applied to the purchase of guns, ammunition, and other equipment.

Training to be violent

The problem with warrior-style policing, as critics and academics point out, is that it prepares officers for violence. And indeed, some of the cops involved in the most visible police shootings have undergone warrior cop training. In 2016, Jeronimo Yanez, a 28-year-old police officer in a Minneapolis suburb, shot and killed Philando Castile, a 32-year old Black man, during a traffic stop. Castile was a licensed gun owner, and had informed Yanez that there was a weapon in the car. Yanez, who said he “feared for his life,” shot Castile in front of his 4-year-old daughter and partner. It was later revealed that Yanez had attended a department-funded “Bulletproof Warrior” seminar. The presenter was Lt. Col. Dave Grossman, an industry figurehead whose teaching primes law enforcement with a central question: Are you ready to kill?

The 2016 fatal shooting of Castile ignited a debate over the merits of warrior cop training in Minneapolis. In 2019, Mayor Jacob Frey announced a ban on the courses for city police officers. “When you’re conditioned to believe that every person encountered poses a threat to your existence, you simply cannot be expected to build out meaningful relationships with those same people,” he said. Within a week of the news, the city’s police union unveiled that it had partnered with Law Officer, a training website, to offer a $55,000 online course to officers free of charge. “It’s not about killing, it’s about surviving,” said Bob Kroll, the union president. A little over a year later, George Floyd, a 46-year-old Black man, was slowly asphyxiated on a public street by a Minneapolis police officer, sparking nationwide calls for reform.

Targeting minorities and the poor

Academics have long pointed out that military tactics simply don’t translate well into domestic policing. In 2018, a researcher at Princeton University found that SWAT teams are not only disproportionately used in communities of color, but provide no improvements to protecting officers or reducing crime. And according to the American Civil Liberties Union, the militarization of police has eroded public trust in law enforcement, particularly with Black and Latinx communities.

While some departments and academics debate how or if cops should transition away from the warrior cop mentality, there continues to be a decided thirst for hard-nosed training. In September, Street Cop Training, a New Jersey-based outfit, released plans for its first annual conference. The event, which will take place at an Atlantic City casino in the fall of 2021, boasts a plethora of keynote speakers, from officers who’ve been featured in high-profile shootings, to an MMA fighter and ex-Special Forces soldier. “I’ve had it with these law enforcement protesters,” blares Tomi Lahren, the conservative pundit, in a promo video for the conference. Cops, she said, “are the thin blue line. They are the heroes!” Like many offerings in the warrior cop industry, a ticket to the five-day conference is not cheap: $500 per admission.

In the wake of high-profile deaths at the hands of police, third-party consultants have yet again pioneered methods to capitalize. PolicePR, a company which specializes in “unconventional” law enforcement public relations, offers to help departments with “damage control.” Police Social Media, an Arizona company, consults departments on how to use “Guerrilla tactics to fight lies, rumors & false narratives.” In California, there’s Cop PRotect, which according to a 2015 press release, was created due to the “national wave of anti-police sentiment” that followed the shooting of a Michael Brown, a Black man, by Darren Wilson, a white police officer, in Ferguson, Missouri.

“Darren Wilson was nearly murdered and now lives in hiding, while the man who tried to kill him is declared a hero by activists,” said the company’s owner, Robert Parry, in the release. ”Cop PRotect gives cops like Darren Wilson… a trusted friend to tell their stories.”

Critics say the warrior cop mindset has had a particularly devastating effect on communities of color and the poor. American police shoot, kill, and imprison more people than their counterparts in any other developed nation in the world. Black people bear the most catastrophic brunt: They are 2.5 times more likely to be killed by police than white Americans are. In the meantime, police struggle with closing investigations. According to the FBI’s latest figures, American police struggle to make arrests for violent crimes, with property crime clearances faring much worse.

“If you are convinced that the people you keep safe are actually the enemy, then your work as a police officer will proceed with that in mind,” said Eric Tang, a professor of African and African-American Diaspora at the University of Texas at Austin. “You can’t have it both ways: On one hand, you can’t talk about being an officer of the ‘peace,’ and on the other hand, describe yourself as someone who is at war.”