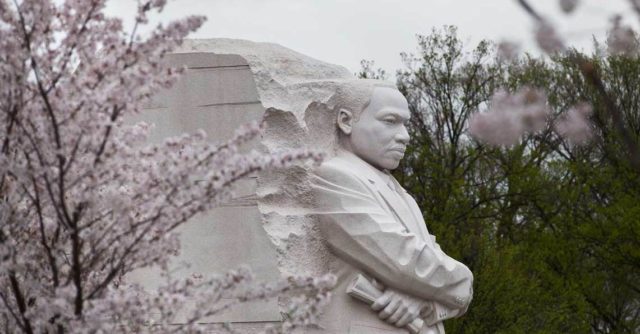 We are now a nation of citizen-consumers, held in thrall to the extreme materialism that Dr. King decried.

In the wake of the police killing of George Floyd, Americans are finally—or is it once again?—confronting the racism that afflicts this country and extends into just about every corner of our national life. Something fundamental just might be happening.

Yet to state the obvious, we’ve been here before. Mass protests in response to racial inequality and discrimination, including police brutality, have been anything but unknown in the United States. Much the same can be said of riots targeting black Americans, fomented and exploited by white racists, often actively or passively abetted by local law enforcement officials. If Jamil Abdullah Al-Amin, formerly known as H. Rap Brown, was correct in calling violence “as American as cherry pie,” then race-related urban unrest is the apple-filled equivalent.

The optimists among us believe that “this time is different.” I hope events will prove them right. Yet recalling expectations that Barack Obama’s election in 2008 signaled the dawn of a “post-racial America,” I see no reason to expect it to be so. A yawning gap, I fear, separates hope from reality.

King described the U.S. government as “the greatest purveyor of violence in the world today.” So it unquestionably remains, perpetrating immeasurably more violence than any other great power and with remarkably little to show in return.

Let me suggest, however, that the nation’s current preoccupation with race, as honorable and necessary as it may be, falls well short of adequately responding to the situation confronting Americans as they enter the third decade of the twenty-first century. Racism is a massive problem, but hardly our only one. Indeed, as Martin Luther King sought to remind us many years ago, there are at least two others of comparable magnitude.

In April 1967, at New York City’s Riverside Church, Dr. King delivered a sermon that offered a profound diagnosis of the illnesses afflicting the nation. His analysis remains as timely today as it was then, perhaps more so.

Americans remember King primarily as a great civil rights leader and indeed he was that. In his Riverside Church address, however, he turned to matters that went far beyond race. In an immediate sense, his focus was the ongoing Vietnam War, which he denounced as “madness” that “must cease.” Yet King also used the occasion to summon the nation to “undergo a radical revolution of values” that would transform the United States “from a thing-oriented society to a person-oriented society.” Only through such a revolution, he declared, would we be able to overcome “the giant triplets of racism, extreme materialism, and militarism.”

The challenge confronting Americans was to dismantle what King referred to as the “edifice” that produced and sustained each of those giant triplets. Today’s protesters, crusading journalists, and engaged intellectuals make no bones about their determination to eliminate the first of those giant triplets. Yet they generally treat the other two as, at best, mere afterthoughts, while the edifice itself, resting on a perverse understanding of freedom, goes almost entirely ignored.

I’m not suggesting that members of the grand coalition of Americans today fervently campaigning against racism favor extreme materialism. Many of them merely accept its reality and move on. Nor am I suggesting that they consciously endorse militarism, although in confusing “support” for the troops with genuine patriotism some of them do so implicitly. What I am suggesting is that those calling for fundamental change will go badly astray if they ignore Dr. King’s insistence that each of the giant triplets is intimately tied to the other two.

The protests triggered by the recent murders of George Floyd and other black Americans have produced widespread demands to “defund the police.” Those demands don’t come out of nowhere. While “reform” programs undertaken in innumerable American cities over the course of many years have demonstrably enhanced police firepower, they have done little, if anything, to repair relations between police departments and communities of color.

As an aging middle-class white male, I don’t fear cops. I respect the fact that theirs is a tough job, which I would not want. Yet I realize that my attitude is one more expression of white privilege, which black men, regardless of their age and economic status, can ill afford to indulge. So I fully accept the need for radical changes in policing—that’s what “defund” appears to imply—if American cities are ever to have law enforcement agencies that are effective, humane, and themselves law-abiding.

What I can’t fathom is why a similar logic doesn’t apply to the armed forces that we employ to police huge chunks of the world beyond our borders. If Americans have reason to question the nation’s increasingly militarized approach to law enforcement, then shouldn’t they have equal reason to question this country’s thoroughly militarized approach to statecraft?

Consider this: on an annual basis, police officers in the United States kill approximately 1,000 Americans, with blacks two-and-a-half times more likely than whites to be victimized. Those are appalling figures, indicative of basic policy gone fundamentally awry. So the outpouring of protest over the police and demands for change are understandable and justified.

Still, the question must be asked: Why have the nation’s post-9/11 wars not prompted similar expressions of outrage?  The unjustified killing of black Americans rightly finds thousands upon thousands of protesters flooding the streets of major cities. Yet the loss of thousands of American soldiers and the physical and psychological wounds sustained by tens of thousands more in foolhardy wars elicits, at best, shrugs. …