On MSNBC Tuesday [6/23], reporter Brandy Zadronzny warned that the threat from the far-right “boogaloo” movement is only getting worse.

“What do you see as the sort of situation now in terms of particularly Facebook and others in hosting activity for thee kinds of groups?” asked host Chris Hayes.

“I talked to someone on the Homeland Security Advisory Council in March, and he said to me, you know, when we have groups of heavily-armed people loudly talking about their plans for insurrection and to kill law enforcement officials, we should probably listen to them,” said Zadrozny. “It seems that we haven’t. And Facebook right now continues to host boogaloo groups who are getting around just the basic level of content moderation they’re doing for these groups and, you know, right now they’re existing on Reddit and they’re even siphoning off to smaller, more private forums that we’re seeing like Discord. I mean, the long and short of it is these groups continue to exist even after all this violence. So in terms of what the platform, their role in it, their responsibility, it seems they’re taking very, very little.”

“It’s striking, too, I mean, the sort of role of both sort of Second Amendment fetishization as a kind of ideological theme and wanting the second Civil War, and also guns at the ready,” said Hayes. “I mean, one of the things we have seen at all these right-wing protests, you know, whether it’s the people who are going to show up to defend their town from Antifa or these folks, that they are — they are armed to the teeth. Like, there is no question about that.”

“Yeah, they are. They have lots of guns and they show their power level,” said Zadrozny. “That’s the one plus in this is that, you know, a lot of these extremists really do — are open about their extremist ties, so we can see the fact that they’re all wearing, you know, Hawaiian shirts, for example, as another sort of stupid in-joke that sort of masks the real danger that they pose. We see them, you know, with boogaloo patches and other sort of insignia that can sort of call them out.”

“But the scary thing for protesters that we’ve talked to, Black Lives Matter protesters and others, is that when they’re at these protests, they can’t tell the difference between who’s there, you know, advocating for their Second Amendment right and who is an actual, you know, real threat,” she added. “And I think it’s just — it’s a terrifying situation.”

Link To Story And 2=-Minute Video

In The Face Of Powerful Protests, Parts Of Middle America Enter The Twilight Zone Of Paranoia 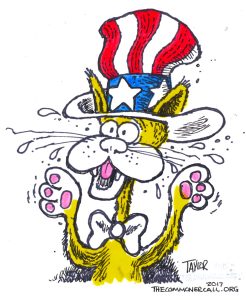 Trump and Barr are at the forefront, trying to scare the citizenry with tales of anarchy and destruction.

There’s a famous episode from the very first season of the legendary “Twilight Zone” TV series. Its title: “The Monsters Are Due on Maple Street.”

The tale unfolds in a small town. A mysterious blast of light and sound comes from overhead and suddenly the power goes off. At first the residents of Maple Street think it’s just an electrical outage, but they become more suspicious and nervous when a boy on the block talks about sci-fi stories he’s read, ones in which aliens send advance scouts posing as humans to set the stage for invasion.

Soon rumors fly and people start grabbing at the flimsiest shred of evidence—and their shotguns—hurling accusations at innocent neighbors. They’re convinced that the enemy is among them, just waiting to commence an attack. Mayhem ensues.

Welcome to America’s Twilight Zone 2020. As massive Black Lives Matter protests have spread worldwide, demanding an end to endemic racism and police violence, on another front, we’re seeing Rod Serling’s 1960 television scenario play out in real time. People around the country, roiled by false rumors and social media innuendo, are convinced that their villages and suburbs are about to be invaded by the dreaded “antifa”—violent far left anarchists and thugs out to vandalize, loot and desecrate middle America.

“In Hood River, Oregon, antifa were, according to screenshot of a fake Instagram story, calling on followers to ‘root loot do anything in your power.’ In Spring Hill, Tennessee, there was a ‘busload’ staying at the Holiday Inn, prepping to loot Walgreens at noon. In Wenatchee, Washington, bands of men dressed in black were surveilling potential targets. In Payette, Idaho, a plane full of protesters was circling overhead. In Honolulu, antifa had been flown in from the mainland. In Billings, Montana, some claimed agitators had been spotted by the National Guard. In Nebraska, they were creating Craigslist ads offering to pay people $25 a day to ‘cause as much chaos and destruction as possible.’ In Sisters, Oregon, they were planning to show up at the local Bi-Mart.

“To be clear: All of these rumors were false.”

At NBC News, Brandy Zadrozny and Ben Collins reported an incident in Klamath Falls, Oregon, where a peaceful Black Lives Matter protest of about 200 was met by hundreds of people, some in military fatigues and vests, and many carrying weapons …

(Commoner Call cartoon by Mark L. Taylor, 2017. Open source and free for non-derivtive use with link to www.thecommonercall.org )

The India Palace was vandalized with “white power” and “Trump 2020” graffiti by vandals who caused over $100,0000 in damage, according to the Santa Fe Reporter.

“Tables were overturned, glassware was smashed into piles on the floor. The wine racks were emptied, a statue of a goddess was beheaded and computers were stolen. Food warmers were turned over and destroyed. The front desk area was gutted, plates smashed and the kitchen rendered completely unusable,” the newspaper reported.

“Among the items stolen or damaged include supplies that Brown and the Singhs would use to create weekly care packages for downtown’s unhoused population,” the newspaper noted. “While recent acts of vandalism against downtown monuments that some consider racist have brought heightened attention to this sort of crime, this attack is marked by white supremacy, is much more involved and has a personal target.” …