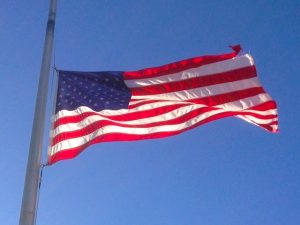 By Buzz Davis
Veterans For Peace

We approach Memorial Day honoring the ultimate sacrifices made by 1.4 million American military men and women who died in America’s wars since 1775. We must discuss the horrific impact of war on surviving soldiers and civilians. For only they can teach us working for peace is a better option than fighting wars.

Each death in war brings everlasting tragedy to a family.

Each death damages the hope of loved ones.

Humans are brutal. We have many wonderful traits. But we must admit to a brutal streak. And we must hope that we do not exhibit that trait ourselves and are not forced into situations where we too become brutal.

Historians view history as a long string of wars. The most destructive war thus far was World War II. Between 45 million and 85 million men, women and children perished in combat, destruction and resulting disease and famine.

This drawing and caption of children at the graveside of a Civil War relative killed at Gettysburg depicts our basic problem. 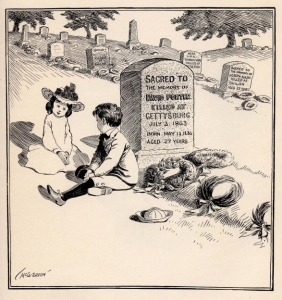 Because a relative served in a long ago war, many children especially boys are socialized into thinking being a soldier is the good thing to do.

As a future infantry officer, I spent a year of my life being taught how to kill people (fortunately I was sent to S. Korea rather than S. Vietnam in 1969).

The military does an excellent job of training men and women to kill. But our generals have no idea of how to train/educate people to “unkill.” Many of our 22 million veterans who were in combat and had to participate in, or were near, the killing, deaths and maimings have memories and emotions they try to control all their lives. Most don’t discuss these memories at all or very much with family and friends. Such discussions are extremely difficult to have.

The veterans’ silence results in enabling power hungry politicians and greedy business persons to use the military industrial complex to push war as the “solution” to problems/challenges nations face.

The result of silence is that millions of veterans are not teaching their children, friends and community that war is not the answer. Killing does not solve problems. It just makes problems more difficult to resolve. You can’t kill a religious idea or political idea with a bullet.

The military teaches team work and being in the military and combat encourages camaraderie. But each vet is on his/her own when it comes to controlling or squashing the bad memories and thoughts.

America spends nearly $800 billion per year on wars, weapons and designing more weapons. We spend only $50 billion on the U.S. State Department and the United Nations.

Nine nations have 15,000 nuclear weapons. Scientists say if just 1% of those weapons are exploded in a nuclear war, tens of millions would die in the first hour. Millions would die later from the radiation effects and fire storms. Firestorms, sweeping large areas creating dark dust clouds, would cause an extended winter of possibly 10 years with drastically shortened food growing cycles. Two billion would be threatened with famine. Life on earth, as we know it, would be gone.

For decades we have had politicians creating more wars instead of creating a more peaceful world via diplomacy, cooperation, helping other nations improve safe water supplies, educational systems, infrastructure, health, food production and strengthening the United Nations to help improve the lives of peoples across this world.

Small steps for America are: Veterans, especially combat veterans, need to discuss with their families some of what they did in “their” war. Or skip their personal experiences, if they cannot talk about it, and talk about the horrendous cost in lost lives. Vets can write letters to the editor of their local papers saying War Is Not the Answer and tell the readers what needs to be done.

Today our nation is controlled by Republican war mongers and meek Democratic followers. We must all think ahead to November 2020. We will have an opportunity to vote out of office those who foolishly advocate war. But right now we must talk about why we must fight harder for Peace than we do for War!

We are your karma

We are your Orion

rising in the night sky

We are the scorpion

We will not buy

We refuse your worthless praise

We spit on your war memorials

We will not feed you

If we have our way

— Doug Rawlings
(Doug Rawlings, co-founder of Veterans for Peace, is a  72 year old veteran of the Vietnam War, who served in the artillery 1968-70. He is a retired high school teacher and university professor, author, President of the Vietnam Veterans for Peace chapter in Auburn, Maine & senior activist for peace and justice. You can link to a podcast interview with Rawlings here.)
*****

Link to the Summer Edition of the Peace & Planet News, a publication to bring veteran antiwar voices to the broader movements for social justice, while connecting the veterans peace movement to all the interrelated issues facing us today—from climate change to racial justice to health care to indigenous rights and more. 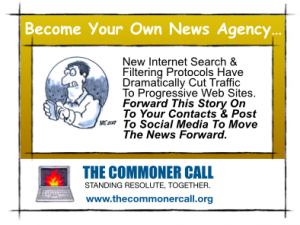